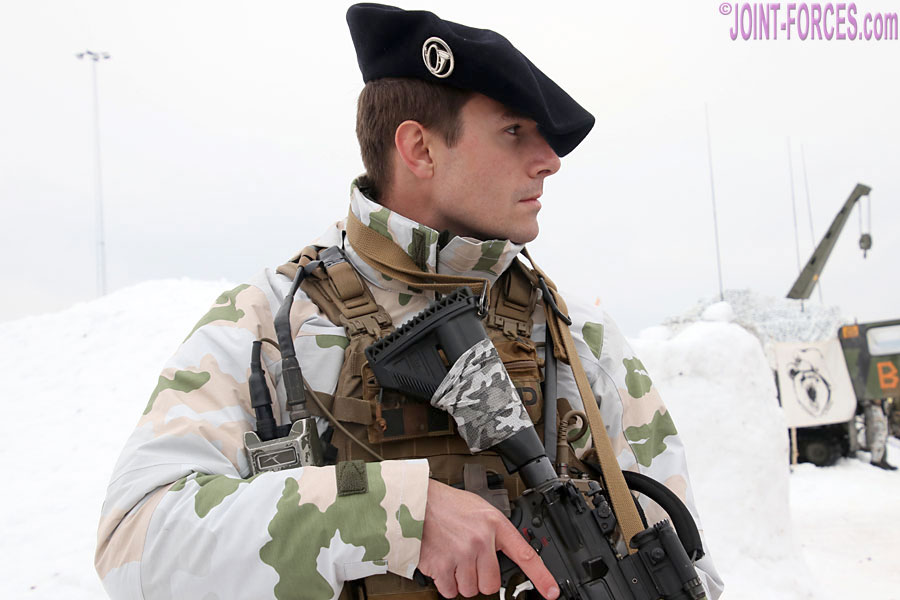 Alpine Tundra, the third standard camouflage pattern of the French Armed Forces after Camouflage Centre-Europe or CCE and the Camouflage Daguet desert camo, has been worn for many years in a three-colour version by Alpine and Special Operations troops in snowy theatres but the latest four-colour version seen here is a relatively recent development.

The original three-colour French Tundra pattern, which Devon company Arktis were heavily involved in developing and supplying, first started appearing in photographs of specialist troops on exercises in Alpine France around 2004 but I have yet to pin down precisely when it was accepted for service as Special Operations Command units started wearing this camouflage first. More recently, a four-colour variant has been recorded in the field and last Thursday I was able to photo this on a Chasseur from 13éme Bataillon de Chasseurs Alpins of 27e Brigade d’Infanterie de Montagne deployed to Central Norway for the NATO multinational rapid response exercise BRILLIANT JUMP 2022 (BRJU22) and the follow-on COLD RESPONSE 2022 (CR22) inside the Arctic Circle.

The original three-colour French Tundra alpine / winter pattern has irregular green and pink shades on a white background but the new version also has a very light grey shade to introduce more depth. When first spotted in NATO photos of French troops arriving in Norway on 9th March for BRJU22, it was unclear if the grey areas were a fourth colour or just a reverse pattern showing through thin over-garments. However as soon as I laid eyes on the new camo pattern combat jackets and trousers, which are not lightweight extra outer layers as used my many armies for deployments in snowy theatres, I was able to confirm that a third colour roller is indeed now being used.

It should perhaps be stated that over the last fifteen years there have been slight colour differences noticed between Tundra batches and garment types, and it is not unusual for the white to become discoloured in the wash if colours leach from other garments which sometimes results in the false impression that there is a fourth colour involved. If I were asked to select SVG colour designations for the secondary Tundra patterns I would probably go for #228B22 forestgreen and #FFDAB9 peachpuff for the desert pink. The new fourth shade is very light indeed ~ in fact it is so light that under some conditions the camera hardly registers it, though the more sensitive naked eye does ~ and I think I would opt for #DCDCDC gainsboro as the closest SVG colour.

None of the soldiers I questioned were able to give me an official name for this new camo pattern, and on the whistle-stop visit to Rena there was no time to photograph garment labels, so I will just call this pattern Tundra 4 until clarification is received. If any readers are able to supply a photo of a label with the official name, I’d be most grateful.

Updated 21st March: A reliable source has informed us that the new waterproof four-colour camouflage alpine combat smock and trousers were developed by the French Army in cooperation with W.L. Gore but as yet we have been unable to confirm this with the company. Although Gore exhibited the new French Army Camouflage Centre-Europe waterproofs at MiliPol 2021 we did not spot the four-colour AlpineTundra version on their stand.