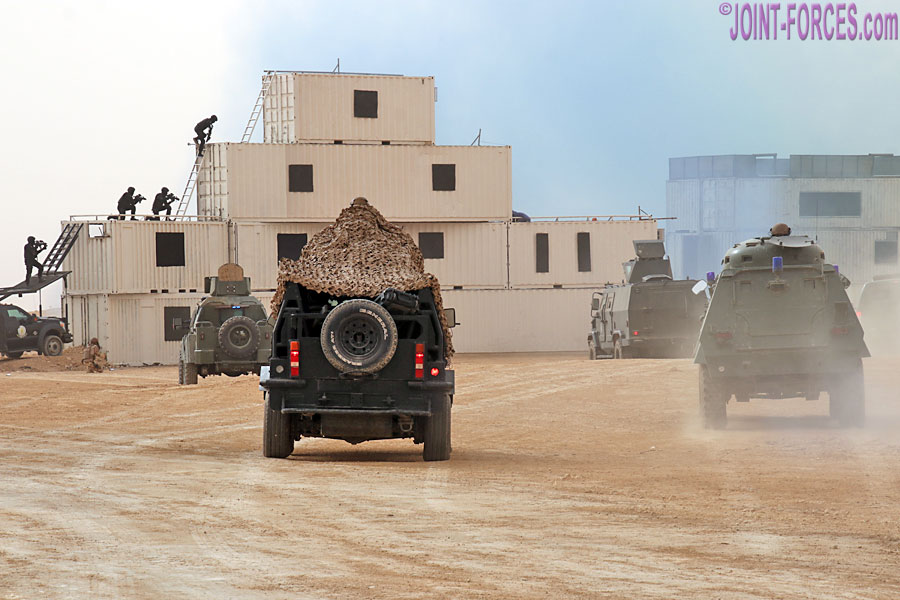 The elite Special Security Forces (SSF) are part of the Kingdom of Saudi Arabia’s Ministry of the Interior tasked with combating terrorism, reports Bob Morrison.

At the recent World Defense Show in Saudi Arabia, held at a new exhibition centre about 40 miles (65km) north of Riyadh, the Kingdom’s Special Security Forces (SSF) planned to lay on a dynamic display of their capabilities with over 200 operators participating. However, as any good soldier knows, no plan survives first contact with the enemy….. and in this case the enemy turned out to be the weather.

On the Friday night prior to the defence expo commencing central Saudi Arabia was struck by a massive sandstorm, which locals say was very unusual for early March, and it would be the following Tuesday afternoon before follow-on high winds eventually cleared the dust from the air; indeed around noon that day the winds were so strong that just walking upright on the airfield apron was challenging. As it had been intended to not only run an air display at this inaugural Saudi defence expo, which has a full runway alongside the expo centre, but also to involve parachute and helicopter insertion during the SSF display the lack of a horizon coupled with peacetime safety regulations curtailed the action; though during a brief Tuesday afternoon weather window the RSAF ‘Saudi Hawks’ managed to mount an aerobatic display.

Back to the Saturday afternoon. Ahead of the official opening, despite the air being full of dust, the SSF ran a reduced scope dress rehearsal of the planned display without any heliborne or parachute involvement, and fortunately I was able to snap a part of this action. Had the main display gone ahead as intended, from Sunday to Tuesday it was my intention to have been in the press sections of the grandstand to photograph proceedings from better vantage points, but at least these limited dress rehearsal shots taken at ground level from one of the forming up points allow us to see some of these elite operators and the vehicles at their disposal.

The intended display scenario involved a Special Forces assault on a coastal hamlet (complete with temporary water feature created just for the demo) where an insurgent terrorist cell had gone to ground. Both ‘black’ and ‘camo’ SSF squadrons took part along with a maritime unit; the latter approached over the ‘beach’. After taking down or overpowering most of terrorists, the operators captured the leader of their group who was trying to flee the scene on an all-terrain vehicle with a hostage driving; a K9 team was ultimately responsible for preventing his escape.

There is not much official information available on the current SSF structure, but the Saudi Ministry of the Interior states that the Special Security Forces are concerned with: combating terrorist operations in all their forms; with intervening in armed riots; and with protecting VIPs. The force also works to provide air protection, presumably undercover sky marshals, for the Saudi Arabian airlines fleet.

In brief follow-on features I plan to look in a little more depth at a couple of the vehicles used by the SSF and also at their unique disruptive pattern camouflage pattern.