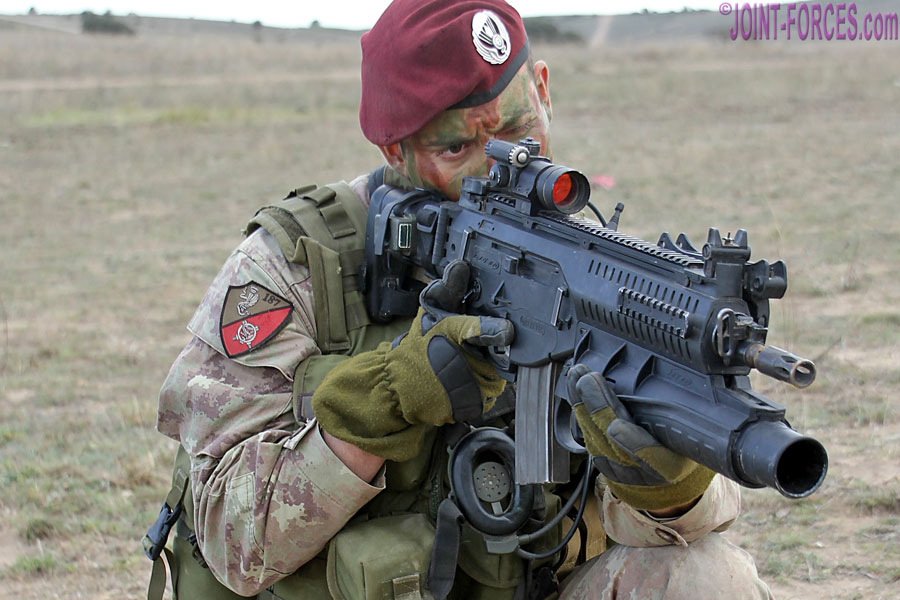 The four-colour Mimetico Vegetata (which roughly translates as Vegetation Camouflage) pattern has been worn by Italian troops since 2004, writes Bob Morrison.

Over the last seven years I have photographed Italian troops in the field in Latvia and in Norway plus on two different military training areas in Spain (Chinchilla and Zaragoza) but as it is usually infeasible to pose a soldier for a four-view Kit & Camo photo session in the middle of an exercise battle or road move the one full set which I have in my library is not really a good colour representation. Sorry.

This Italian Paratrooper from the Livorno-based 187th Paratroopers Regiment ‘Folgore’ had just jumped into the CENAD San Gregorio training area near Zaragoza as part of the dynamic display laid on for the Distinguished Visitors Day associated with the major multinational Exercise TRIDENT JUNCTURE ’15. When I first spotted him I presumed he was wearing the lighter desert variant of the 2004 Mimetico Vegetata pattern, usually called Mimetico Vegetata Deserto, but once up close I spotted faded green in the mix and realised his garments were just extremely sun-bleached examples of the standard camo.

The standard Mimetico Vegetata temperate camouflage colours are: a dark, almost black, chocolate brown; a reddish or russet brown; a light olive green; and a light stone or light khaki base. I am deliberately vague about these colours as I have seen new and near new fabric samples and uniforms in such a wide variety of shades, ranging from vibrant through to subdued, that it is difficult to be too precise. There can also be a fair bit of variation dependent on the fabric used; this difference is very noticeable on waterproofs. Colours also seem to fade quickly in the Mediterranean sun, giving the impression of different colourways; for example look at the inner face of the dump bag in the kneeling shot and compare with the outer face in the rear shot of the Paratrooper four-view.

For those who are interested, the desert version of this camouflage pattern uses more sandy shades with the russet replaced by ochre and the green replaced by khaki drab, but again there is wide variation seen. I have never, however, seen any Italian desert camo uniform fabric which has green in the mix. It is also worth pointing out that this Para had probably been wearing his uniform for several days out on the arid autumnal Spanish plains, meaning it was rather dusty as well as being sun-bleached. His sleeve insignia identifies him as belonging to the 187th ‘Folgore’, which traces its history back over 80 years to the elite Paracadutisti Division which achieved fame at El Alamein in 1942, and he wears the maroon beret with Paracadutisti cap badge.

Turning now to the group of three Italian Fusiliers, spotted in Latvia on Exercise SIVER ARROW 17, who were wearing more representative Mimetico Vegetata colours, they were from 9º Reggimento Fanteria which at that time provided Italy’s infantry company contribution to the NATO enhanced Forward Presence battlegroup (eFP BG LAT) under what Rome calls Operazione BALTIC GUARDIAN. In my opinion this Italian camo worked remarkably well on the Adazi Polygon (training area) as autumn transitioned to winter. For more, including a brief video clip, see Infantry Focus ~ Italian 9º Reggimento Fanteria.

The main infantry component of the Italian contingent deployed to Norway for TRIDENT JUNCTURE 18 was also drawn from the 187th ‘Folgore’, this time deployed as a lightly armed and equipped rapid reaction force tasked with blocking an opposition force advance. For more see TRJE18 In Focus 01 ~ Italian Armour. On this exercise the Paras wore waterproof combat smocks and/or insulated jackets and the shot of Paras refuelling an Iveco LINCE shows just how much variation in colourway, particularly with the green, is caused by printing on different fabrics.

Footnote for the gun geeks: The Folgore Para’s rifle is a Beretta ARX-160 with underslung GLX-160 40x46mm grenade launcher, developed specifically for the Italian Army’s Future Soldier (Soldato Futuro) programme. It entered service in 2007 with 25,000 production examples ordered from 2008. Chambered primarily for NATO 5.56mm ammunition, though NATO 7.62x51mm and Russian 7.62x39mm conversions have also been produced, the standard Italian Army version has either a 302mm carbine (as here) or 406mm assault rifle barrel.