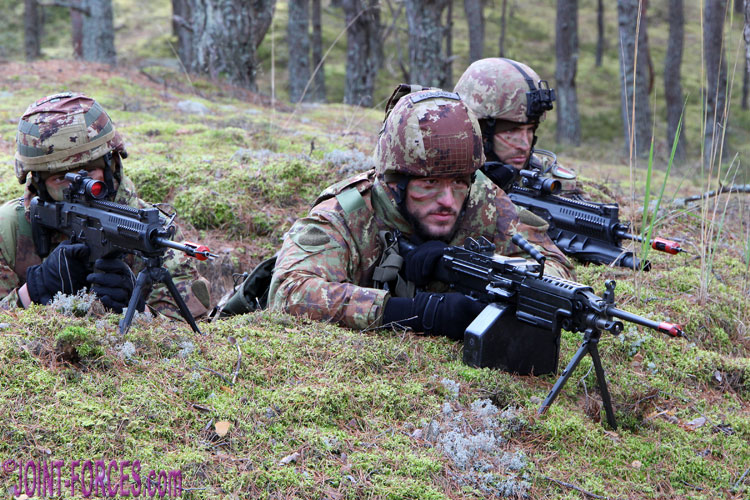 Late in 2017, while in Latvia covering the first roulement of the Canadian-led eFP (enhanced Forward Presence) multinational NATO battlegroup based at Adazi, we seized the opportunity to snap Italy’s 9º Reggimento Fanteria in the field.

We have already covered the Italian contingent’s armour, but neglected to bring readers any images of the troops themselves. (Spiacente, per favore accetta le mie scuse.)

The 9th ‘Bari’ Infantry Regiment (9º Reggimento Fanteria) which maintains the traditions of the historic Queen’s Regiment of Savoy, is an all-volunteer battalion-strength (in peacetime) formation and part of the Pinerolo Mechanised Brigade. Based at Trani near the top of the heel of Italy, the battalion comprises a Headquarters Company, three Fusilier (Fucilieri) Companies and a Manoeuvre & Support Company.

The current temperate theatre camouflage pattern for Italian Army uniforms is Mimetico Vegetata (closest translation would probably be Vegetation Camouflage) which was introduced in 2004. The colours are a very dark, almost black, chocolate brown, a reddish or russet brown, and a light olive green, printed on a light stone or light khaki base.

I am always a bit vague describing Mimetico Vegetata colours as I have seen new and near new fabric samples and uniforms in such a wide variety of shades, ranging from vibrant through to subdued, that it is difficult to be too precise. Colours also seem to fade quickly on clothing worn under the Mediterranean sun, giving the impression of different colourways, and even though the light in Latvia in late October was very flat there is still quite a colour difference between garments (note that the camo sample on this page was photographed in bright Spanish sunlight in 2015 during Ex TRIDENT JUNCTURE).

The standard Italian assault rifle is the 5.56mm Beretta ARX-160, developed specifically for the Italian Army’s Future Soldier (Soldato Futuro) programme, which entered service in 2007. The underslung 40mm grenade launcher visible in a couple of shots is the GLX-160. The section’s light machine gun is the 5.56mm FN Minimi.

Footnote: Just after I photographed these Italian troops their positions were attacked by Yellow Forces, in this case Estonia’s elite Eesti Scouts, so unfortunately on this occasion it was not really feasible to take one of the Fucilieri to one side to photograph a five-view Kit & Camo sequence.