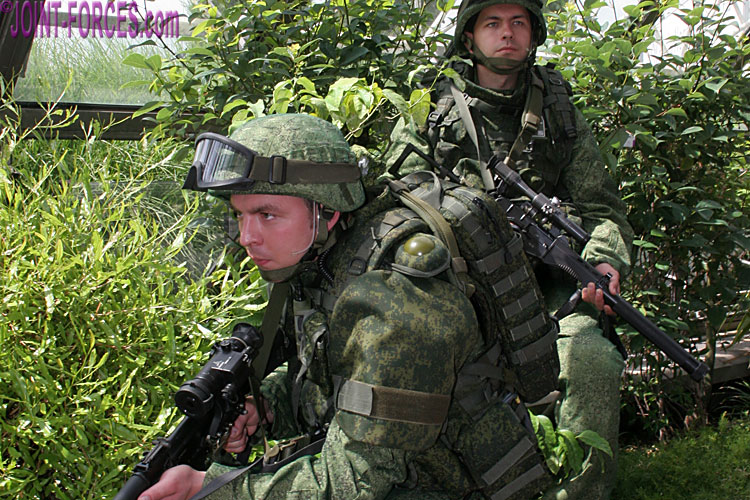 Over the last decade or so Carl (Schulze) and I have photographed the kit and camouflage of many military personnel serving with NATO member and Middle East nations in the field but, other than a handful of OSCE (Organisation for Security and Cooperation in Europe) Observers, plus a few SpecOps competitors at KASOTC in Jordan, for various reasons opportunities to photograph Russian troops in uniform have not presented themselves.

Recently, the Russian Federation Ministry of Defence has been unusually forthcoming with images and videos of the short but impressive CSTO (Collective Security Treaty Organisation) mission into Kazakhstan to undertake a NEO (Non-combatant Evacuation Operation) and to secure key points such as power plants and communications hubs during a brief period of civil unrest. As a result we have been able to view Russian (and partner nation) troops and their current equipment, including various camouflage patterns, on both video and stills; we are by no means, however, experts in this particular field.

One opportunity we did have to photograph both new Russian personal kit and camouflage uniforms, though not in the field, was back at the Eurosatory 2014 defence expo in Paris; an event which took place barely three months after the Russian annexation of the Crimean Peninsula and just a few weeks before Russian troops invaded the coal-rich Donbass region of Ukraine. At the June 2014 expo the Director General of TsNIITochMash, Russia’s Central Research Institute for High Precision Machine Construction, with a team of military design specialists briefed a small group of interested defence media representatives on the latest evolution of the Russian Federation’s Ratnik (Warrior) equipment system. This presentation was the first showing of the second generation basic infantry equipment set at an international defence expo and naturally we grabbed the opportunity both to photograph it for the old Kit & Camo section in C&S Magazine and to ask the Director General specific questions about the interesting ballistic fabric used for the camouflage combat uniform.

At the time the new Russian Army Ratnik equipment system consisted of five inter-linked, inter-connected integrated sub-systems, namely: the Attack system, which included weapons, sighting equipment and ammunition; the Communications, Control And Navigation system; the Protection system, which included ballistic helmet, body armour in a tactical vest and special anti-fragment suits; the Life Support system, which included engineering and medical support; and finally the Power Sourcing system for all the combat equipment. A modular package designed to be used by Infantry, Marines and Special Forces, its most important goal was said to be to ensure the survival of the soldier on the battlefield.

At first glance it is not apparent from the photos that both the jacket and trousers featured here were tailored from a special fabric which it was claimed provides protection from small fragments and ballistic particles; this fabric will not, of course, stop bullets or high velocity shrapnel but is intended to reduce penetration of smaller battlefield debris which can potentially debilitate the soldier. The new uniform also included special gloves which were said to not only facilitate good grip on the weapons but also to provide ballistic protection for the hands. When helmet and eyepro were also worn with the new uniform almost 100% of the soldier’s body was protected from ballistic fragments.

All elements exhibited at Eurosatory 14 were part of the basic set claimed to have already been delivered to, and to be in use with, the Russian Army in June 2014. It was stated each element had not only undergone the required tests but also had already been proven to be reliable and efficient in actual combat; we take this to mean Crimean Ukraine, as in mid-2014 the Russian Federation had not yet committed forces to Syria to support the Assad regime.

In response to my questions the TsNIITochMash Director General said: “The Ministry requires this fabric to be waterproof, flame-proof, tear-resistant. The material used is a complex structure.” When I asked if it had a breathable membrane, like Gore-Tex or Sympatex he replied: “Yes, there is a breathable membrane but we are unable to provide technical details. Just to add, where we cannot use a breathable fabric we use normal unbreathable fabric but we provide some space underneath, between the fabric and the body, to provide ventilation.”

The new ‘ballistic’ compound fabric used for the second generation ‘Ratnik’ combat uniform had a distinctive green halo effect around the edges. In these shots the load carrying vest and daysack are tailored from the Russian YMR (единая маскировочная расцветка romanised as Yedinaya Maskirovochnaya Rastsvetka and which approximately translates as Universal Camouflage Colourway) sometimes known as ‘Digital Flora’ pattern, introduced c.2008, but the new garment fabric appeared to my eyes to be a variant of the newer Spekter-S camouflage used by some Special Purpose or Spetsnaz units. I was unable to take the Russian soldiers wearing this new kit and camo outside of the Eurosatory expo building to capture photographs in natural light, so asked them to pose in an atrium instead as this was the next best thing. Note the interesting blurry green halo effect of the synthetic material, which up close appears to have almost the texture of a pan scourer ~ though despite its look it it is not rough to the touch.

It was easy to identify both standard YMR uniform camouflage and some of its derivatives being worn in recent video footage and still images of Russian troops deployed to Kazakhstan over the Orthodox Christmas holiday period; a mission which some cynics have questioned if it might have been little more than a dress rehearsal for troops earmarked for capturing key points on the Kremlin’s next venture into another sovereign state. However although items of Ratnik personal kit were apparent on this January 2022 foray, none of the troops appeared to be wearing uniforms in the ballistic fabric featured here; though this is unsurprising as there was little prospect of the CSTO contingents being fired upon during what appeared to be predominantly a very brief flag-waving NEO mission to predominantly bring home Russian tourists on skiing holidays stranded by a sudden outbreak of serious civil unrest and subsequent closure of the international airport.