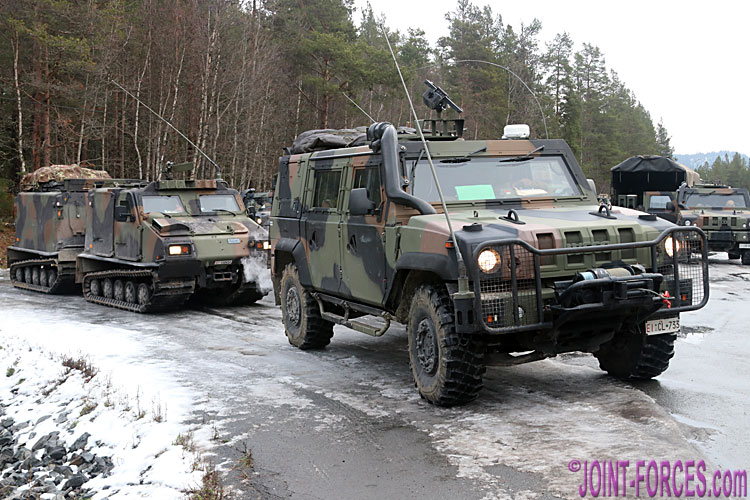 TRJE18, as we have seen from previous ‘big picture‘ articles, was the largest NATO Field Training Exercise (FTX) held since the fall of the Iron Curtain and the end of the Cold War, when the Soviet Union split and the Warsaw Pact collapsed.

Although we, i.e. Carl Schulze and myself, each spent the best part of two weeks in Norway covering the exercise, mostly working apart to try to achieve as much coverage as feasible, due to the massive troop dispersals over a vast area of mainly public access territory riven by high mountain ranges between the four opposing pairs of brigade-strength multinational formations on each side, we were only able to scratch the surface. Rather than producing four long and comparatively sparsely illustrated articles covering each of the North versus South, or Red versus Blue, manoeuvres we have elected to produce a series of illustrated articles focussing on the at times very different vehicles and equipment used by the various multinational brigades.

Italy, which provided the lead for NATO’s Very High Readiness Joint Task Force or VJTF in 2018, was the lead nation for the westernmost South (Blue) Force multinational brigade and it is her equipment that we focus on first. Spain, Slovenia and France were the other three major contributors to this brigade, and we will cover their armour next, plus Albania also contributed a company but unfortunately we did not manage to track them down in the time available. The Italian-led brigade was defending its sector against Canadian Mechanised Infantry and a USMC Marine Expeditionary Unit, and we will also cover these in due course.

Around 1,200 Italian personnel participated on the exercise with the majority of the Land Forces (the Italian Navy and Italian Air Force also took part) being drawn from the Headquarters of 132nd Ariete Brigade and the 187th ‘Folgore’ Paracadutisti Regiment along with a platoon from 13th Carabinieri Regiment; all being constituent components of the Friuli Division from Italy’s Northern Command. The Italian Army (Esercito Italiano) is formed of eight commands, of which the six major formations are: the over-arching Land Forces Command, which includes Special Operations and Army Aviation; Alpine Command, which includes the Mountain (Alpini) Brigades; North Command, which contains mostly rapid response forces including Cavalry, Airmobile and Parachute (Paracadutisti) Brigades plus the Ariete Armoured Brigade; South Command, which mostly contains Mechanised Infantry Brigades; Support Command, which includes Artillery, Engineer, Signals and Intelligence assets; and Logistics Command.

The Spanish infantry unit tasked with stopping the Canadian (Red) attack was the elite 187th ‘Folgore’ Paracadutisti Regiment who normally rely on the Iveco VTM LINCE (LYNX) for the protected light transport function: LINCE is known as PANTHER in British service, where it serves in the Command & Liaison Vehicle role, but curiously the UK MoD decided last April to cast the roughly 400-strong fleet ordered in 2003 even though its replacement (JLTV) had not yet been ordered? The Italians, on the other hand, not only like their 2,000 or so vehicles already in service but also plan to both double the fleet size and upgrade early examples, and even the Russians field more, known as RYS, than the British Army bought. For images of Italian VTM LINCE on NATO EFP duties in Latvia click here.

The second armoured, protected in modern parlance, vehicle fielded by the Italian Paras on TRJE18 was the Hägglunds Bv206S tracked over-snow vehicle. At first when I spotted these articulated tracked vehicles in the field I presumed their occupants must be Alpini, but a few days later when I had the opportunity to briefly speak to their commander he explained that they had borrowed them from their Mountain Infantry colleagues to ensure they had well heated and highly capable vehicles for mid-Norway in early winter; half of their British infantry colleagues fighting in support to the east, where temperatures are lower as further from the sea, were sent into exercise battles in the sleet and snow in just canvas backed cargo trucks!

Produced by the Swedish manufacturer Hägglunds, now part of BAE Systems, the Bandvagn 206S is the armoured version of the all-terrain tracked articulated personnel carrier designed specifically for over-snow operations and widely used throughout NATO. The S-model, which tips the scales at around seven tonnes, is able to transport up to a dozen combat troops with driver plus four in the front module and eight more in the rear; compared to a maximum 16 in the original softskin vehicle. Although similar to the BvS10 VIKING used by the Royal Marines, the Bv206S is both smaller and lighter.

Powered by a six-cylinder Steyr turbo-diesel, the fully laden Bv206S can achieve a road speed in excess of 50km/hr (31mph) and it is also amphibious with its tracks propelling it on still water at around 5km/hr. Its 620mm wide tracks, which run the full length of each of the two modules, ensure its ground pressure is sufficiently low to allow it to cross snow, boggy ground and soft sand. Not only is the vehicle NBC protected, but its heating and ventilation system allows it to operate from +45C down to -30C, making it ideal for both Arctic and desert deployments.

Finally, although we tried hard to find the Paracadutisti during their battles with Canada’s R22R, the elite Van Doos, as they were defending mountainous terrain high above the roads on the valley floors and we did not have a Bv206S at our disposal we never got any closer to them than a couple of kilometres.

Footnote: For 1:35 scale military modellers*, Italeri produce a nice model of the LINCE and TAKOM produce a detailed Bv 202S model. Hopefully these images will come in handy for reference.

*If you came to this page from Facebook please Share so other military modellers can find it. Thanks As the medics here were on real-time standby, and also seemingly spoke no English, I was unable to persuade them to let me check inside for layout [©BM]