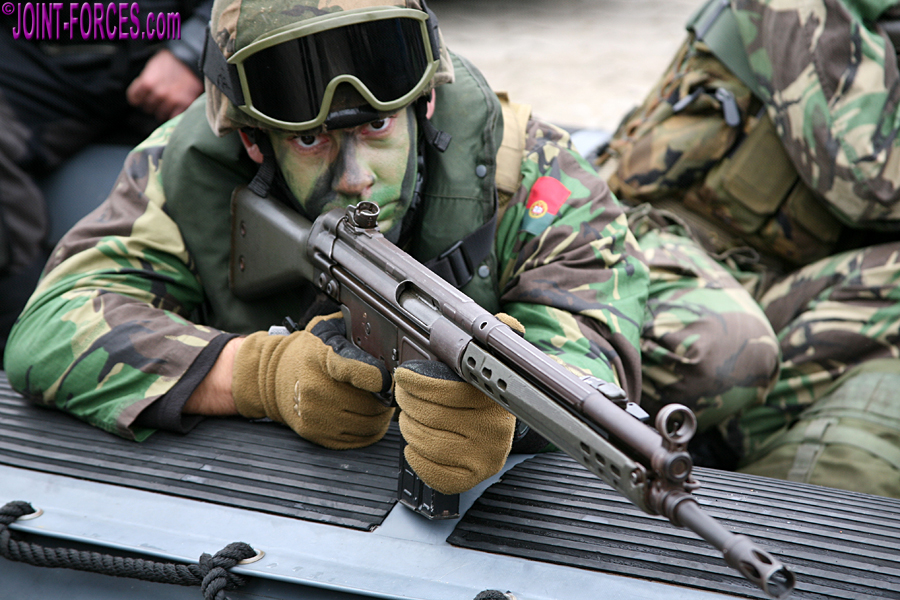 The recently released NATO Multimedia video of Portuguese Fuzileiros training in Lithuania jogged my memory and reminded me that I had been able to photograph this elite Marine Infantry formation near Tróia back in 2015 but had not subsequently included their uniform in this Kit & Camo section.

Portugal developed its own distinctive Lizard camouflage pattern around 60 years ago, widely considered to be a derivative of the post-WWII French Lizard pattern developed for airborne forces in Indo-China, but since the 1980s the bulk of its Army and Air Force have used four-colour British DPM or Disruptive Pattern Material, known as Padrão de Floresta or Forest Pattern, as their standard uniform camouflage. Over the last 15 or so years a couple of three-colour Desert DPM variations have also been worn on operations in arid theatres, with either black or chocolate brown as the tertiary shade. In 2018 it was announced that the new five-colour ACU m18 pattern would be rolled out starting the following year, but it is believed that the COVID-19 pandemic subsequently impacted widespread distribution and as a result photographs of troops wearing it in the field are few and far between.

The Corpo de Fuzileiros, part of the Portuguese Navy and considered to be Special Operations Forces by their government, continued to retain a version of M63 Lizard pattern, and indeed on their official website this distinctive camouflage was still widely in evidence in early 2016. However the previous November, when we were invited to photograph the Fuzileiros at Pinheiro da Cruz during the multinational Exercise TRIDENT JUNCTURE ’15, we were surprised to see that they were now wearing DPM and the only person we spotted wearing Lizard camo that day was a sniper whose heavily modified ghillie suit jacket was clearly derived from an old uniform.

With their origins in the oldest permanent military unit of their nation, the Naval Regiment of the Crown of Portugal (Terço da Armada da Coroa de Portugal) which was created just over four hundred years ago, the Fuzileiros are the direct equivalent of Britain’s Royal Marines and are considered to be their country’s elite military formation. Organised into a Corps Command, a School of Marines (similar to CTCRM Lympstone) and a Marines Base, the teeth arms of the Fuzileiros consist of two Marine (Marinha) Battalions and a Special Operations Detachment (Destacamento de Ações Especiais or DAE) which operates along the lines of Britain’s SBS.

Although the Portuguese Navy does not have any amphibious assault ships on strength, and its lone surviving Bombarda-class tank landing ship was decommissioned and used as a maritime exercise target a couple of years ago, the Fuzileiros have a number of smaller LDM 100 and LDM 400 class landing craft plus the LARC-V (Lighter, Amphibious Resupply, Cargo) at their disposal. During the multinational TRIDENT JUNCTURE 2015, however, they used Royal Marines LCVPs for the amphibious assaults.