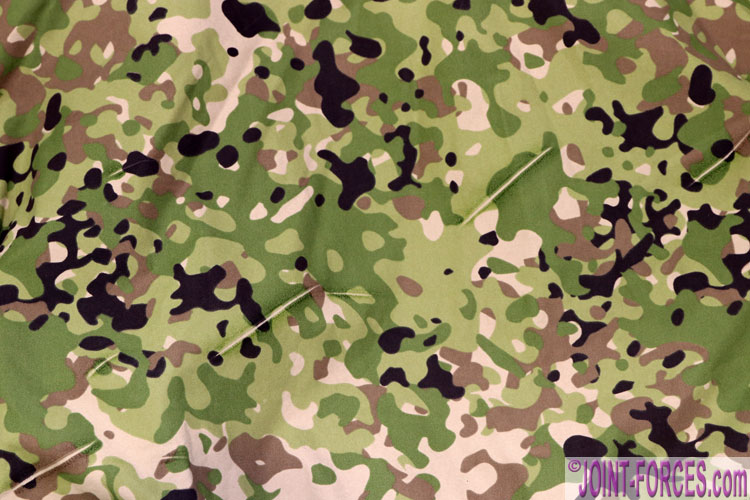 In February 2018 the Portuguese MoD announced their Soldier Modernisation programme, including a new camouflage pattern, would be introduced 2019, writes Bob Morrison.

On the Portuguese pavilion at the recent Egyptian Defence Exhibition (EDEX) in Cairo, examples of the new Advanced Combat Uniform (ACU) were displayed by the Portuguese Platform for Defence Industries (idD) and we grabbed the opportunity to photograph both the back panel of the combat jacket and two sample swatches printed on different fabrics. This new pattern is one of three new designs produced in cooperation with CINAMIL (Centro De Investigação Desenvolvimento e Inovação da Academia Militar or Investigation Center for Development and Innovation of the Military Academy) and is of the currently in-vogue multicam-style, but it is not a variant of Crye MultiCam and it does not have the feathered edges found on the American-designed commercial pattern.

A five-colour amoeba-type pattern, m18 camouflage is predominantly verdant, with both light and dark shades of green, on a Light Stone base with Earth Brown and Near Black colours giving depth. The photographs on this page were taken indoors under false lighting, so will not be a true reflection of how the camouflage actually looks in daylight conditions, but they should give readers a general idea of the new pattern; the two sample cards were photographed side by side under the same lighting conditions and display the expected colour variations when printed on different composition fabrics.

Although the new ACU is scheduled for roll-out from 2019, the Head of Institutional Relationships at idP told JOINT-FORCES.com that some troops currently deployed on overseas operations are already wearing it.