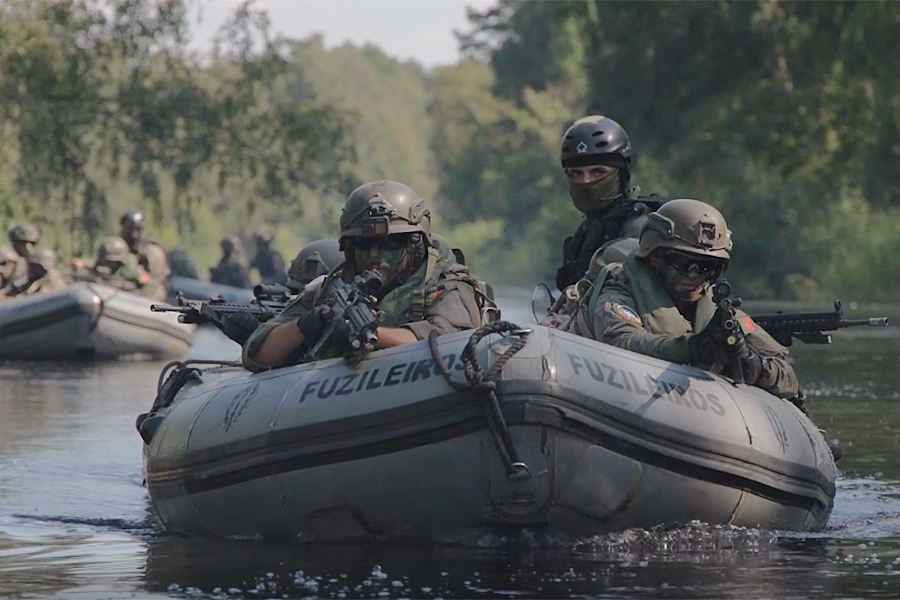 Covered in camouflage paint and packed into boats, watch these Portuguese Fuzileiros practise amphibious operations on a river in Lithuania.

Portuguese Marines (Fuzileiros) and navy divers have been practising skills and tactics in Lithuania. The group are in the Baltic country for three months as part of NATO assurance measures, which comprise land, sea and air activities in and around the eastern part of the Alliance.

In this NATO Multimedia footage, filmed at the end of June and released yesterday, they demonstrate amphibious operations on a river in Lithuania using a reconnaissance team followed by an amphibious assault team. The footage includes various shots of the Fuzileiros conducting river-based amphibious operations training, plus soundbites from Portuguese Marines Lieutenant Commander Robert Viola.

The Corpo de Fuzileiros officer explains, in his native Portuguese: “The terrain here in Lithuania is different from Portugal. Portugal is a country with some mountainous area, and Lithuania is flatter but allows great mobility, whether on foot or in an armoured vehicle.

“The importance of Portugal being here in Lithuania is having the opportunity to be able to share operational and tactical experiences, and concretely be able to take advantage of what is the differentiating factor of this unit, amphibious operations. We are an amphibious unit and that allows us to use the rivers and their interior, and to be able to explore this amphibious aspect and share that experience with the Lithuanian armed forces.

“This mission certainly allows NATO to show itself as a joint Alliance, capable of asserting itself in Lithuania with a strong, joint, combined presence capable of performing any kind of task or mission.”