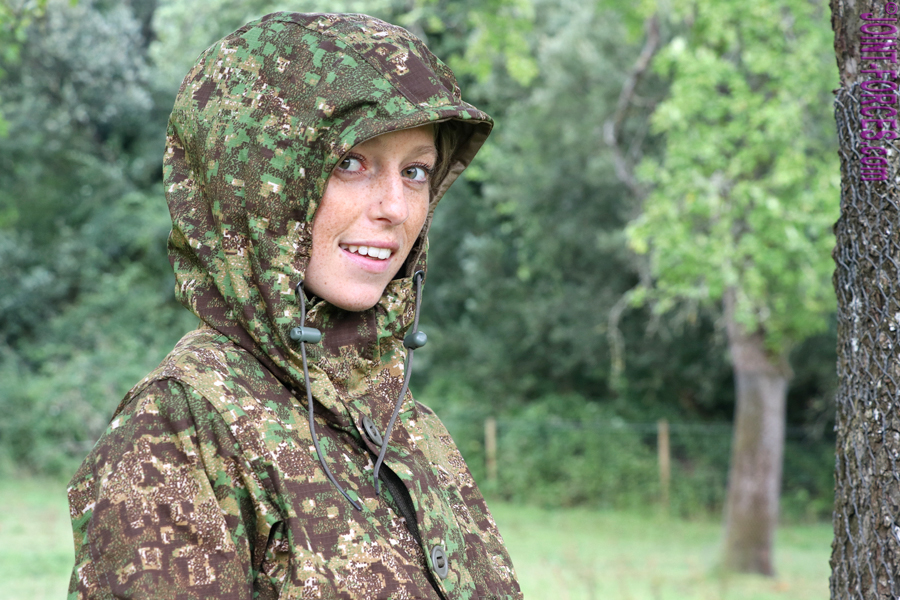 We were allowed to briefly take the B310 Waterproof Combat Smock off the Arktis Endurance Textiles stand to grab a couple of photos in natural light, but unfortunately Eloise was not on hand to model it so a handy tree outside the expo hall had to suffice. However last week when I visited the company’s Exeter factory to take photos for a forthcoming Sponsor Feature I was able to take the same smock away with me and that evening we took some detail photos outdoors with a local cider apple orchard as background.

Firstly, a quick word on this unusual UK-designed camo pattern, which was developed in the middle of the first decade of the 21st century by Dom Hyde of Hyde Definition and is worn by a number of military and police Special Operations teams; including at least one British surveillance unit we are aware of. According to Dom the key features of the PenCott family of patterns are:-

Incidentally, the PenCott pattern family name was derived from the names of two British WWII experts in the camouflage field; artist Sir Roland Penrose, senior lecturer at the Eastern Command Camouflage School in Norwich, who wrote the 1941 Home Guard Manual of Camouflage and zoologist Dr Hugh Bamford Cott of the War Office, who in 1940 produced the major academic textbook Adaptive Colouration in Animals. There are four primary variants of the PenCott family: GreenZone, as the name suggests, is the basic version intended primarily for temperate and tropical use; BadLands is the semi-arid variant, SandStorm is intended for totally arid theatres, and SnowDrift is for Arctic and High North use. The primary colours for GreenZone are a slightly subdued chocolate brown and a verdant green, with yellow ochre as secondary colour and and light stone as tertiary. As under daylight conditions there is no true black in nature, this colour does not feature in any of Dom’s PenCott variants.

Although PenCott is a digital pattern, unlike the early 21st Century digital designs such as CADPAT/MARPAT and American UCP the PenCott camouflage does not feature large ‘pixels’ of similar size and if using a loupe or magnifying glass assorted rectangular shapes ranging from about 1mm (mini) to about 5mm (midi) can be detected. However from more than a couple of metres away the tiniest of these ‘pixels’ have a tendency to blend to form addiional shades, which both introduce a 3-dimensional aspect and give the impression that there are more than four colours. I also reckon the close-up effect can sometimes be visually similar to lichen. The tertiary stone shade is actually the fabric’s base colour and its function is to reflect the colour of the surroundings to help further blending with the background; if you understand digital photography or video, consider how white balance adjustment changes an image and you will comprehend how picking up reflected colour can be beneficial. In the two long shots of Eloise, which were taken in bright but low evening sunlight, note how the colours of the smock, tree trunk and the grass behind look much ‘warmer’ than those shots taken under flatter light.

Turning now to the smock itself, this is the latest version of the classic Arktis B310 design manufactured in Devon from the Arktis’s own 50/50 polycotton ripstop fabric licence-produced in PenCott GreenZone camo in the parent company’s Northern Ireland mills; I will look a little closer at this aspect in the forthcoming Sponsor Feature. For weatherproofing, the outer fabric is DWR (Durable Water Repellent) treated and the garment has a breathable and waterproof full inner 20K/20K polyester dropliner with taped seams. Incidentally, I have owned an earlier design Arktis breathable waterproof jacket for twenty years, which I use for Arctic and severe wet weather assignments, and I swear by it.

Although called a smock, the B310 is a front-opening jacket with inbuilt hood rather than being a true over-the-head smock. There is a 3/4 length, double-action front zip protected by a button-down weather baffle with both taped buttons and hook & loop tapes; i.e. the zip can be left open for a little ventilation while the jacket is still securely closed. Sleeve cuffs can be pulled in with hook & loop tape and there are drawcords with toggle locks at both waist and smock hem to pull the garment in close to retain body warmth. The permanently attached wired hood also has a similar drawcord. All drawcords are supplied over-length to allow the wearer to trim them to personal preference, but as ours was a sample garment which we were returning we left them full-length in the photos.

This smock has four capacious boxed, rather than bellowed, cargo pockets on the front ~ two medium on the chest and two large below the waist drawcord ~ and there are vertically zipped document pockets behind each chest pocket. Under each flap, which is fastened down by a 25mm (1”) diameter taped button, there is a fold-over weather baffle. On the upper left arm there is also a small flat-sewn pocket with a divider to form a pen sleeve. No arm patch pads are supplied on the off-the-shelf B310, but if specified these could be added on bulk contract orders. There is also a useful zipped internal chest pocket on the left side.

This is a very well designed and tailored garment which, if my previous experience of Arktis clothing is anything to go by, should last a very long time. Incidentally, Eloise commented within a few minutes of putting it on (next-to-skin) on a windy evening that it was not only really comfortable but also very warm indeed.

The Arktis Webstore will be offering the following range of PenCott GreenZone garments, all tailored from fabric produced under licence from Hyde Definition by Balymena-based Dinsmore’s mills, from around 16th August :-

Note that the above links are to plain coloured garments, as PenCott GreenZone will not show in the web store until items are ready for despatch from the Exeter warehouse. Several other camo pattern options are also available for most garments in the Arktis range.