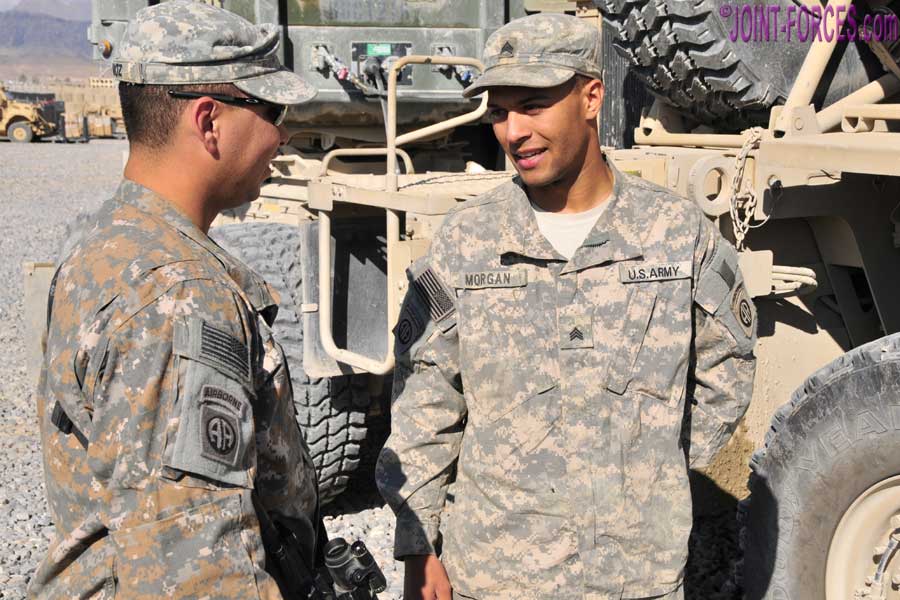 The US Army’s Universal Camouflage Pattern – Delta or UCP-D was produced in an attempt to resolve issues with digital UCP camo, writes Bob Morrison.

In mid-December 2009 Carl Schulze was able to photograph US Army personnel trialling UCP-D (Universal Camouflage Pattern – Delta) in Afghanistan and penned the following article on his return ~ so over now to Carl:-

Just a few years ago, in 2004 to be precise, the US Army introduced the then new Army Combat Uniform or ACU design. In addition to a new more economic and ergonomic cut, the uniform was tailored from a digital camouflage pattern known as Universal Camouflage Pattern (UCP) which replaced the then in-service four-colour Woodland and three-colour Desert Patterns. The colours of this new camouflage were grey, tan and sage green. Procurement of the new ACU, as well as other personal equipment such as webbing, body armour covers and so on in the UCP cost the US taxpayer some four billion dollars.

One For All: When it was introduced the US Army claimed that the UCP would be an all-singing all-dancing pattern, providing the best possible camouflage to troops wherever on earth they might be operating. It had been designed over several years by a process using the very latest technology. However, even during its introduction the camouflage pattern was much criticised.

Many of the critics claimed that the US Army would have been much better off with the US Marine Corps Pattern camouflage designs, namely MARPAT Woodland and MARPAT Desert (both of which are still in use in 2021, Ed.). In fact the author was among those critics who claimed that one camouflage pattern for all parts of the world simply would not work, and military history provides many examples to bear this out. During World War II the German Waffen SS, for example, which was a master in the art of camouflage, had several different camouflage patterns in service designed specially for different seasons of the year or for certain theatres of operations; some of these patterns would, incidentally, form the basis of successful later designs for the next six decades.

After entering service the ACU in UCP actually distinguished itself in combat to some extent. In fact the digital camouflage pattern really worked quite well in the Iraqi cities, which consist mostly of concrete buildings, as well as in open desert in that specific theatre. However in areas with vegetation it failed to achieve the desired effect of blending the soldier into the surrounding and concealing him from detection from the human eye. This factor was mainly experienced by US troops operating in parts of Afghanistan where vegetation could be encountered, such as the ‘Green Zone’ of the Helmand Valley where US troops operated before and later alongside the British, and by those exercising on vegetation-covered training areas of northern America or western Europe.

Enter Coyote Brown: With criticism growing the Universal Camouflage Pattern soon became the object of some serious testing and evaluation work. Between November 2005 and July 2006 the US Army Soldier Research, Development and Engineering Center at Natick conducted the Computerized Visual Camouflage Evaluation, which resulted in a report that stated non-digital Crye MultiCam Pattern, in service with some US Army and Air Force Special Forces units, performed significantly better than the UCP in most conditions.

The result of a subsequent Photosimulation Camouflage Detection Test, also conducted by the Natick SRDEC, gave an even worse outcome. Conducted between March 2007 and March 2009 it showed that at least four of the other camouflage patterns evaluated during the test outperformed the UCP. These patterns were the MARPAT Desert, MultiCam Pattern, the Desert Brush Pattern which was designed alongside UCP, and a Syrian desert camouflage pattern. It was in these tests, published in June 2009, [referred to in Pt 1] that British two-colour Desert DPM came out top in the Desert Category and third in Urban, though it came understandably last out of thirteen patterns for Woodland use. Once again the UCP had been outperformed, with the other benchmark camouflage patterns beating it by offering 16 to 36 percent better concealment.

Eventually, this criticism of the performance of the UCP on the battlefield, in conjunction with the results of the Natick studies, as well as pressure from the chairman of the US Congress House Appropriations Subcommittee on Defense, led to a congressional mandate issued in June 2009 giving the US Army a timeframe of 30th September 2009 to come up with a more suitable pattern.

After the Infantry School of the US Army suggested that perhaps a brown shade should be added to the UCP, five new variants were developed; known as UCP-Alpha, UCP-Bravo, UCP-Charlie, UCP-Delta and UCP-Echo. At this point it should be mentioned that the digital camouflage patterns of the US Army (UCP) and US Marine Corps (MARPAT) are printed using the same screen process. The UCP of the Army Combat Uniform utilises three screens whereas MARPAT requires four.

As MARPAT performed well, pimping up UCP was the logical consequence. Therefore during the development of the five new variants a fourth screen was simply added to the in-service UCP. Further testing of these five new UCP variants led to UCP-Delta being selected for operational user trials in Afghanistan. The additional colour added to UCP-Delta is Coyote Brown, which covers some thirty percent of the pattern by area. Also selected as an alternative for comparison field trials was the commercial Crye MultiCam pattern.

The US Army was looking to achieve two goals; firstly to identify and field an ACU in an effective camouflage pattern for its troops deployed to Afghanistan under Operation ENDURING FREEDOM, and secondly to find a long term solution to the problem that would take into account deployments to other world regions as well.

Field Trials: Selection of a new camouflage patternwas done in four phases. Under Phase I two battalions deployed to Afghanistan were equipped with new uniforms by October 2009. The 2nd Battalion of the 12th Infantry Regiment, a unit equipped with vehicles of the Stryker Interim Armored Vehicle family and which was also testing the latest version of the Land Warrior Infantry Equipment, was provided with ACU in the MultiCam pattern. It was also given IOTV (Improved Outer Tactical Vest) covers and MOLLE equipment etc. tailored from MultiCam.

In contrast to this the 2nd Battalion of the 508th Parachute Infantry Regiment was issued with ACU in the UCP-Delta camouflage pattern. These paratroopers were issued with three sets of uniforms each, consisting of trousers and blouses (shirts), as well as an additional helmet cover. However, their combat equipment such as IOTV covers, MOLLE pouches and so on remained in the standard UCP as there was insufficient time to manufacture these items which, unlike MultiCam, were not already on the quartermasters’ shelves.

Phase II of the trials began at the end of October 2009, and within a few weeks we tracked down members of the 508 PIR trialling it in Afghanistan. This second trials phase included the gathering of feedback from the soldiers wearing the new kit as well as another round of photo simulations involving uniforms and camouflage patterns. It is believed that this phase involved six camouflage patterns in total, including the MultiCam and the UCP-Delta patterns plus four benchmark patterns.

Phase III began in January 2010 and under this phase decision makers assessed whether or not to procure, introduce and field new uniforms, as well as personal equipment, in a new camouflage pattern to selected units operating under Operation ENDURING FREEDOM in Afghanistan.

Phase IV: The starting date for Phase IV had not yet been determined at time of writing. Under this final phase the US Army would make decisions as to whether or not to establish a long-term solution to solve its then current camouflage pattern problem. It was not yet certain if this would mean introduction of Army Combat Uniform in set camouflage patterns for certain regions or the fielding of uniforms in a new ‘universal’ type pattern Army-wide.

The Solution: As we now know (continues Bob Morrison) was to dump the failed UCP digital camouflage and resort to new uniforms in an analogue camo pattern derived from the commissioned predecessor of the commercial MultiCam pattern. This new ‘old’ pattern, sometimes referred to as Scorpion W3, was designated Operational Camouflage Pattern or OCP – for more on UCP and its replacements see this trilogy plus the prequel:-