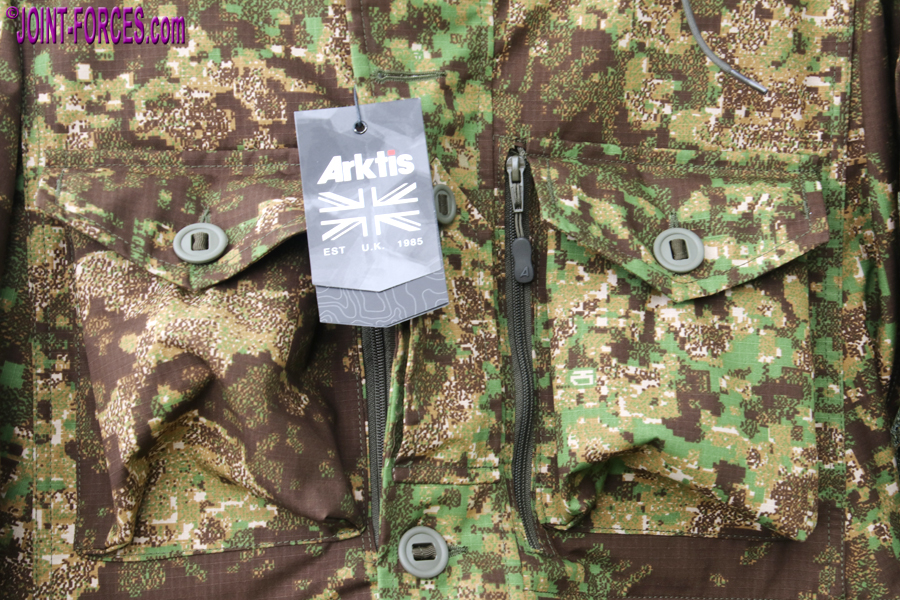 For those unfamiliar with PenCott Green Zone, it is a four-colour verdant/temperate pattern designed in the UK by Dominic Hyde of Hyde Definition and internationally favoured by specialist users. Indeed ARKTIS have recently been contracted to supply their B310 smock and C310 trousers to elite UK Police surveillance teams for rural operations, hence the reason for them adding fabric in this pattern to their range of options (though you will not yet find it listed on the company website).

The example in the photographs was displayed on the ARKTIS stand at last week’s Outdoor Trade Show in Liverpool, the first major event that the company have been able to attend since we met the new CEO at MiliPol Paris in late November 2019. As the smock displayed at OTS was the only example in this new pattern we were unable to take it away with us, and buildings on the north bank of the Mersey do not exactly provide the greenest of backdrops, but hopefully these photos will suffice until we have the chance to borrow a smock to shoot against a more suitable backdrop at a later date.

Editor’s Footnote: ARKTIS has not featured much on JOINT-FORCES.com as previous owner Tim Holden retired and sold the business shortly before we started our website, then COVID-19 struck just as the new owners were rebuilding the brand, but with the worst of the pandemic now hopefully over we plan to pay them a bit more attention as their operation has expanded. I have owned and worn specialist items of ARKTIS kit since before Gulf War One, indeed company founder David Ross produced the unique photographer’s vest (a specially modified RMP COP Vest) which I wore for all my assignments in Croatia / Bosnia / Macedonia from 1994 through to 2001, and in extreme bad weather I still wear a black B310 Waterproof Smock which I proffed way back in 2001 specifically for an Arctic photo trip organised by the Norwegian Army.