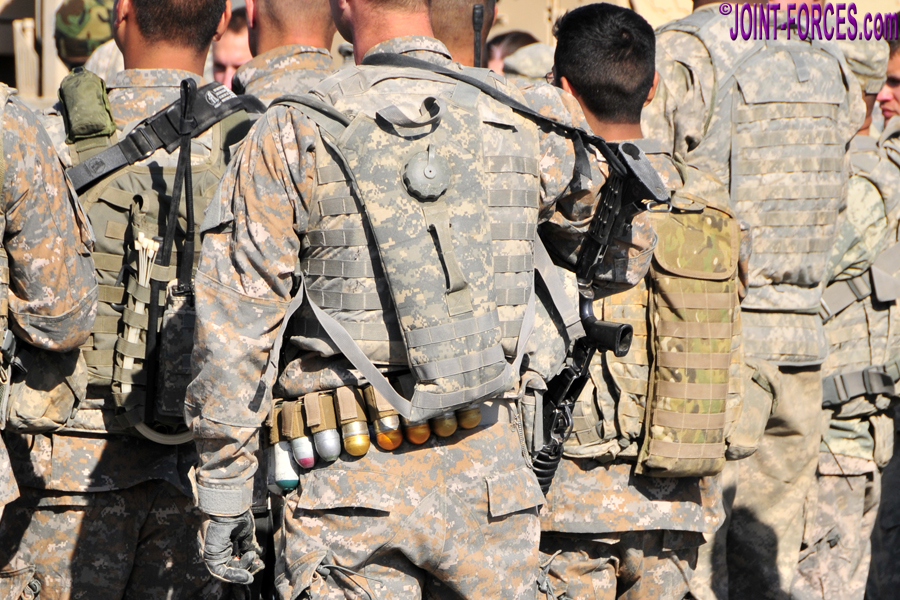 The US Army’s Universal Camouflage Pattern – Delta or UCP-D was produced in an attempt to resolve issues with digital UCP camo, writes Bob Morrison.

US Army Universal Camouflage Pattern or UCP was a three-colour digital pattern, first issued in 2004/5 as ARPAT in bluish green shades but later ‘warmed up’ with more sandy shades.

Negative field reports concerning the suitability of UCP on combat operations in Iraq and Afghanistan prompted the US Army Natick Soldier Research Development and Engineering Center to commence a digital blending evaluation of both Universal UCP and MultiCam Pattern, the latter being a commercial derivative of a non-digital earlier camouflage developed for US Army trials, and the results of this later evaluation indicated that MultiCam performed significantly better than the UCP in most conditions.

Interestingly, however, one of the eleven other comparative commercial or foreign camo patterns evaluated not only significantly out-performed UCP (10th place overall) and MultiCam (6th place) by coming out first out of thirteen in the Desert Environment category, but also took 3rd place in the Urban Environment tests in comparison to MultiCam in 4th and UCP in 8th. For the Woodland Environment this desert/urban camo failed badly, ending 13th behind UCP in 12th place, though interesting even MultiCam could only make 6th again.

With such poor results returned, not to mention the many complaints from users, it is no surprise that Uncle Sam was in a bit of a panic to find a proper camo solution for troops on the frontline in Afghanistan and as a result five more variants of UCP in different colour shades were produced, of which one was sent along with MultiCam for field evaluations in Afghanistan in late 2009. When our man Carl Schulze (one of the old C&S Magazine team) was in-theatre he ensured he tracked down the new variant on test, designated UCP-Delta.

Incidentally, the camo pattern which excelled in the US NSRDEC digital blending evaluations for Desert and Urban Environments was good old British 2-colour Desert DPM. This may explain why UK MoD intimated that while MTP (Multi-Terrain Pattern) would replace Temperate (Woodland) DPM on general issue from 2011, Desert DPM would not be ditched completely.