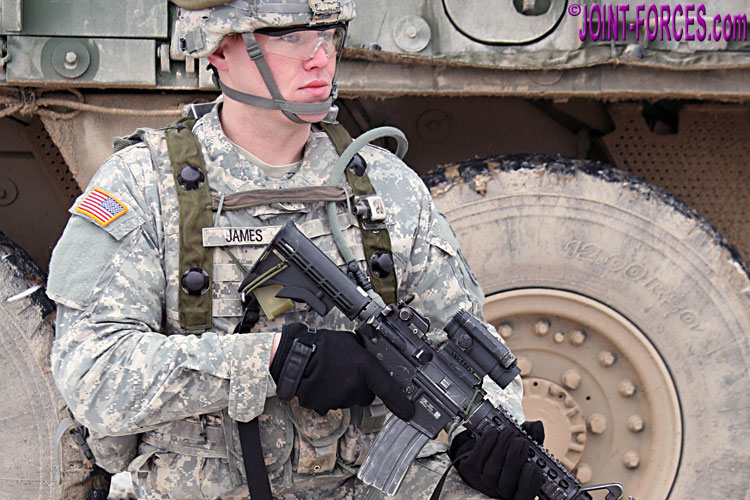 Around 2004 the US Army started replacing its 1981 Woodland (M-81) derivative of the 1960s-era ERDL patterns with a new Universal Camouflage Pattern or UCP, writes Bob Morrison.

This new Universal Camouflage Pattern was a ‘digital’ or ‘pixellated’ camo, derived from earlier US Marine Corps patterns which were themselves derivatives of earlier Canadian designs, and was supposedly intended to work in all theatres and terrains… but if failed dismally.

UCP, as the name indicates, was intended to be a universal camouflage pattern for uniforms and personal equipment but it was soon realised that although this camouflage does work reasonably well in urban environments (notably in towns and cities during IRAQI FREEDOM operations) it is far from ideal for either arid or woodland terrains where the bulk of US operations were mostly taking place towards the end of the last decade. Although the base colour of UCP was a light stone shade, which reflected the ambient colour of the surroundings to some extent and helped the wearer blend in a little, the other two grey shades (officially Sage and Gray) used tended to contrast with natural backgrounds resulting in the soldier standing out from the surrounding foliage or terrain unless light levels were very low. Five alternative four-colour versions of UCP were experimented with for Operation ENDURING FREEDOM, including a UCP-Delta* variant with an added coyote brown shade which was field tested in late 2009, but in the end it was decided that Crye MultiCam (also field tested in Afghanistan at the same time) was much better suited to the conditions being encountered.

In early February 2015, while NATO was starting to build up its defensive shield in Europe once more following the Russian Federation’s surprise annexation of Crimea from Ukraine the preceding year, I photographed 4th Squadron of the 2nd US Cavalry Regiment on the multinational Exercise ALLIED SPIRIT in Hohenfels. The ‘Second Dragoons’ of the US Cavalry were at that time configured as a Stryker Brigade and stationed in Bavaria as a component of US Army Europe and another of their squadrons had just been deployed to Latvia on Operation ATLANTIC RESOLVE wearing MultiCam (OEFP) uniforms. This Trooper, however, as his squadron was not on active operations wore uniform in the digital UCP fabric, which was sometimes also referred to as ACUPAT (Army Combat Uniform PATtern).

On Ex. ALLIED SPIRIT the troopers from 4th ‘Saber’ Squadron also wore olive green MILES (Multiple Integrated Laser Engagement System) harness straps over their body armour and bands around their helmets and transmitters on their M4 carbines. All wore MCEP (Military Combat Eye Protection) spectacles, mostly with clear lenses, of PEO-approved design. At that time troops wearing UCP were not authorised to wear black boots and had to wear tan coloured Army Combat Boots with tan coloured rubber outsoles and without sewn-in or laced-in zips. There were over sixty different models of authorised combat boot on the PEO-Soldier list in early 2015, but most Saber Squadron troopers seemed to be wearing Belleville or McRae (as here) boots.

The low visibility shoulder patch of the US 2nd Cavalry, worn on the upper left arm by this Trooper, includes the fleur-de-lis commemorating WWI service in France on top of the 8-pointed star of the Dragoons above the motto TOUJOURS PRET or ALWAYS READY. On the upper right arm all Troopers sported the US Stars & Stripes flag and some HQ troops also wore the 3rd Infantry Division insignia.

In the next article in this mini-series I plan to look at OEFP (i.e. MultiCam) selected as an interim camouflage until OCP (i.e. Scorpion W2) was introduced to fully replace UCP, which should be phased out by the end of this year.

Footnote: Our Senior Correspondent Carl Schulze was able to photograph US Paras from 2nd Battalion 508th PIR wearing UCP-Delta uniforms during the Op ENDURING FREEDOM trials and once Carl returns from a long field deployment I will ask him to delve into his archives for photos for a supporting feature.