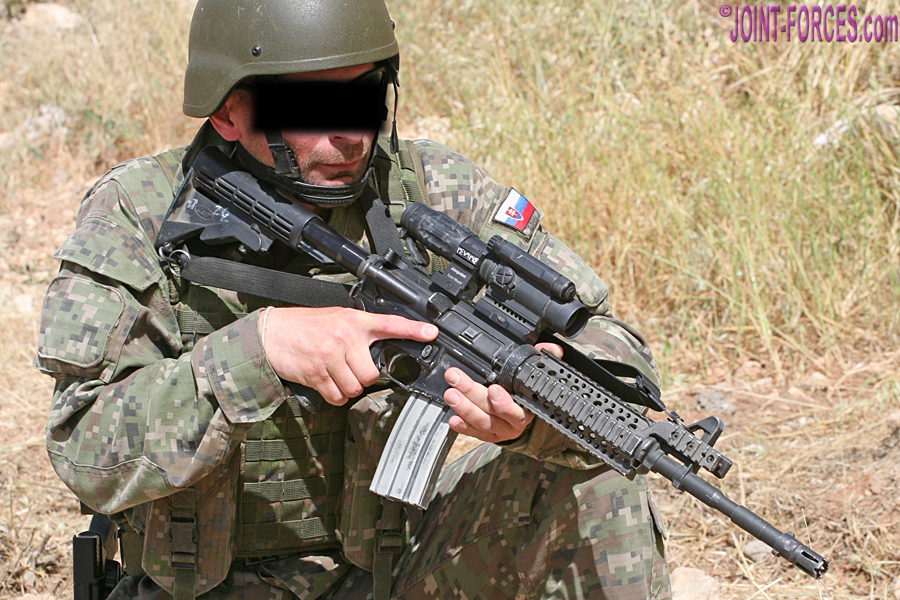 In January 2020, as part of our coverage of UNFICYP uniforms worn in 2014, we looked at the Desert version of Slovakian vz 2007 Digital camo, writes Bob Morrison.

As is often the way somebody, okay I, went off on a tangent and neglected to follow up by looking at the more common Slovakian vz 2007 Digital Woodland Pattern; known in the Slovak language as Les or Forest. Hopefully this brief article will redress the balance.

The accompanying images are of the Slovak Spec Ops team which participated in the 6th ANNUAL WARRIOR COMPETITION at KASOTC (King Abdullah II Special Operations Center) on the outskirts of Amman in Jordan in May 2014. The team had taken both Les (Woodland) and Púšť or Pust (Desert) camo uniforms with them and while I vaguely remember them only wearing the latter to preserve uniformity during the official Opening and Closing Ceremonies, while participating in the different stages they wore the uniform they felt most comfortable in – hence the variety in the group shots. One of the team also wore an older pair of vz 95 ‘Leaf’ pattern trousers, which allowed us to see how the two woodland patterns are compatible.

Part of the united Czechoslovakia until the early 1990s, but a separate nation from the Czech Republic (now Czechia) following the demise of the Warsaw Pact, at first Slovakian troops continued to use the mid-80s Czechoslovak vz 85 ‘woodland’ camouflage pattern which was widely acknowledged as being a derivative of the earlier US Army ERDL ‘Leaf’ pattern. In the mid-90s a slightly ‘muddier’ version of vz 85 was introduced by Slovakia under the vz 95 designation and though this was soon replaced with a variant of US M81 Woodland pattern for conventional forces’ use, the 1995 ‘Leaf’ pattern remained popular with Slovak Special Forces.

The current Slovakian vz 2007 Les is a four-colour pattern of predominantly chocolate brown and bottle green shades over a sand or stone base with small areas of black to give the impression of depth. The overall effect is most definitely aimed at temperate theatre use and although large squarish ‘pixels’ are used – note that most are not true cubes despite Les and Púšť being nicknamed Kocky or Cube – the general effect is not really all that digital in appearance when viewed from more than a few metres away. However the overall impression of the woodland pattern is that it is much denser than its desert equivalent.

As is evident from the group photo, where one of the operators is wearing both woodland patterns, vz 2007 Les and vz 1995 ‘Leaf’ camouflages are reasonably compatible at close range and from infantry engagement range they are almost indistinguishable to the eye. Of course, as is only to be expected, neither of the woodland patterns are as good in arid theatre conditions as vz 2007 Púšť . Wearing an effective camouflage was not required for any of the events at 6th AWC, and indeed several of the international teams participated in their national camo designed for a totally different environment, so the mixed dress Slovakian Spec Ops team did not look particularly out of place on the ranges or in the field.

Although I have photographed Slovakian troops in both Cyprus and Jordan, I have not had the opportunity to work with them in Slovakia. However from US Army photos taken on exercises in both their homeland and in Germany, vz 2007 Les pattern, even though digital, appears to work well in a Central European context.