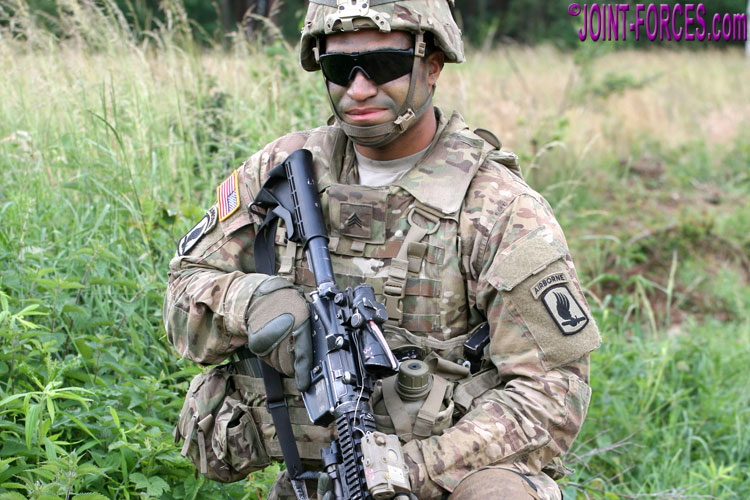 As seen in the previous feature, the US Army’s Universal Camouflage Pattern was not a success and was replaced by Operation Enduring Freedom Pattern, writes Bob Morrison.

Whereas the unsuccessful UCP, introduced around 2004, was a digital or pixelated pattern its 2010 replacement was not only a more conventional analogue pattern but its design was a commercial evolution of a camouflage originally conceived for the US Army requirement which led to the procurement of the much disliked three-colour camo just a few years earlier.

This commercial derivative was, of course, Crye Precision’s MultiCam which took the basic ‘Scorpion’ camo pattern developed for the M-81 camo replacement trials and gave it more appeal by adding some more vertical elements to the design thereby giving it broader commercial appeal as well as overcoming any potential intellectual property rights issues. The Special Forces community, with its own budgets and the ability to procure ‘outside the box’ was fast to spot that commercial MultiCam clothing was much better suited to operational needs, particularly in their primary combat theatres of Afghanistan and Iraq, and it did not take long for their international brethren to follow suit.

On 6th June 2016, while 1284 American, British and Polish paratroopers were dropping close to the Vistula near Torun in Poland, some 200 kilometres to their north-west a joint American and Italian force drawn from the 173rd Airborne Brigade Combat Team and the Folgore Parachute Brigade seized Swidwin Airfield to secure the US 2nd Cavalry Regiment’s northern flank during the DRAGOON RIDE phase of Exercise SABER STRIKE ’16. It was a Trooper from 2 CAV, wearing the now replaced Universal Camouflage Pattern or UCP, who I covered in the previous Kit & Camo article but by mid-2016 most US Army personnel operationally deployed with US Army Europe had now gone over to combat uniforms in the then new Operation Enduring Freedom Pattern camouflage.

It was simply not feasible for me to cover the two linked airborne operations at Swidwin and Torun on the same day but I did meet up with some members of the 173rd ABCT elsewhere in Poland the following week during a different phase of the linked SWIFT RESPONSE / ANAKONDA ’16 exercise programme. The US Airborne ‘Sky Soldiers’ sergeant seen here is from the Vicenza-based 173rd and wears Army Camouflage Uniform (ACU) garments plus plate carrier made from the camo design which at that time the US Army designated Operation Enduring Freedom – Camouflage Pattern; usually this is abbreviated to OEF-CP or just OEFP or, occasionally and erroneously, OCP which actually refers to the newer Scorpion W2 pattern uniform (which I plan to cover in the next article in this mini-series).

OEF-CP / OEFP camo, i.e. Crye Precision’s MultiCam pattern, was authorised for operational service in Afghanistan from the summer of 2010, with the 173rd Airborne Brigade being the first major unit to deploy operationally wearing it; previously only some Special Forces and units undertaking uniform trials had permission to wear this camo. The easy identifier of the Army Camouflage Uniform style of jacket and trousers, which were introduced in 2004 at the same time as the much disliked sage/grey/tan digital Universal Camouflage Pattern or UCP, are the hook & loop closure upper sleeve and lower leg pocket flaps which are replaced by a vertical zipper and button respectively on the redesigned OCP ACU garments. Insignia patches worn by the sergeant seen here wearing OEFP ACU are the 173rd’s identification badge, AIRBORNE tabs, and the national flag.

Although now generally replaced by OCP (Scorpion W2) pattern, as recently as late September this year I spotted US personnel in the field wearing some older OEFP garments during RAPID TRIDENT 2019 in Ukraine; presumably this was to keep newer uniform garments in better condition. As both patterns have the same colours and underlying structure they are fully compliant and it can sometimes take a good eye for detail to differentiate between the two.

Next time, OCP as worn on Yakima Training Area in Northwest USA earlier this year.