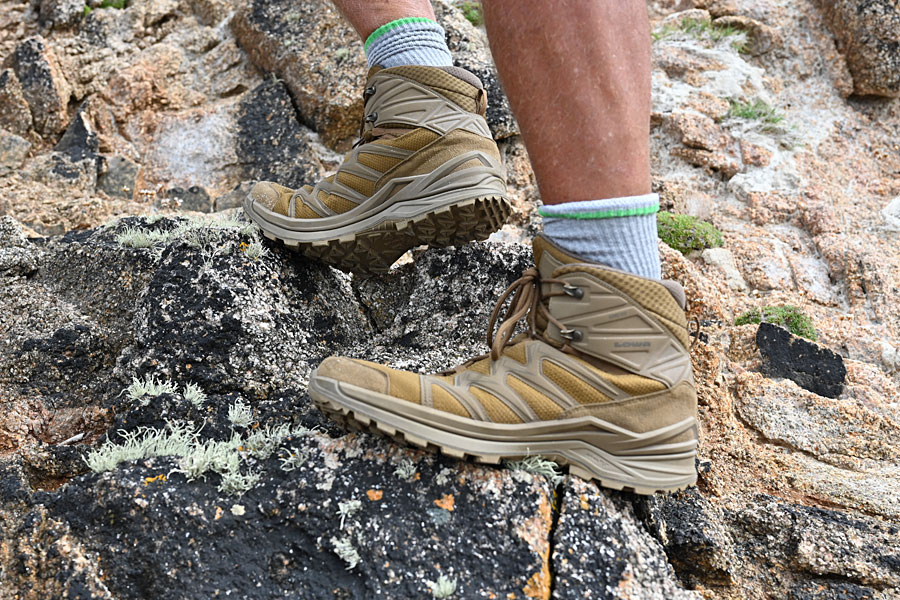 Back in the spring I had the opportunity to put the Lowa Zephyr boots through their paces and continue to do so long after. As a follow-on from this, I have been using the lighter Lowa Innox Pro.

I have to be careful of my words here as tempted to say the Innox are ‘lesser’ boots than their cousins, but this would be wrong as they are more of a light patrol boot. They are lighter, and clearly for a different role, but with some cross-over for sure. I took both boot types on a trip away, involving more rugged coastal walking on mainland Cornwall, where at first I used the Zephyrs (which were ideal) but the Innox would have been fine, though on the quite aggressive coastal terrain these boots offer less protection to themselves and the wearer. However, I did use the Innox Pro boots in occasionally similar conditions later in the trip and they were fine and did not suffer as much as I expected when the toes and heels were subjected to abrasion from rocks.

The Innox Pros proved to be very versatile boots and I ended up wearing them for everything. It was a lightweight trip so ‘universal’ footwear was necessary. They had to cope with general travel as well as some long and varied walking on the Isles of Scilly. This meant very varied terrain, from rocky to sandy as well as town and evening use and, of course, on and off boats a great deal.

I really liked these boots. They proved to be typically comfortable and I always felt sure-footed what ever I was on, including a wide variety of boats with all that brings on wet and slippery surfaces where the Lowa Multi Trac soles did their stuff. These boots have Gore Tex Extended Comfort membrane lining if you should get properly into the wet.

Once home and in the better weather of summer the Innox Pros came out on many occasions when a lighter boot was required for a walk or general day to day use. They have more flex than the more supportive Zephyrs. Innox Pro boots have the normal Lowa user-friendly lacing system with no hooks to get caught up on ‘things’. They are available in Coyote as seen here or Black.