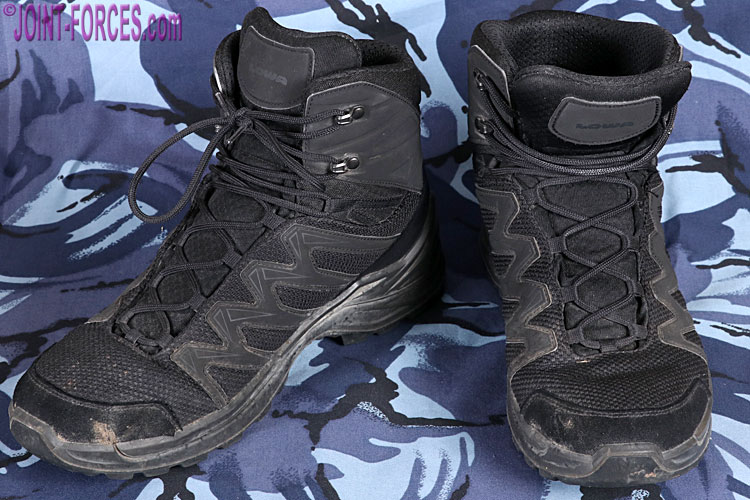 When I visited the Task Force stand at the Outdoor Trade Show in Manchester last July, the former British Army soldier who runs the UK military and police footwear distribution side of LOWA surprised me with a pair of ‘hot off the last’ Innox Pro GTX mid-height TF patrol boots in black, which naturally I gave a good initial wear test to check them for comfort and suitability. As expected, they passed with flying colours.

As luck would have it, shortly after completing my initial LOWA Innox Pro boot test I received a pair of brown HAIX Black Eagle Nature GTX mid-height brown boots and these went on my feet for the next few weeks. The plus side to this was that I had two similar yet different types of Gore-Tex Extended Comfort membrane boots to alternate on my feet in September through both Operation BEYOND THE HORIZON in Central Spain and Exercise RAPID TRIDENT in Ukraine. Since early October, however, for roughly two days out of every three I have worn the black Innox Pro boots as my standard footwear because they are really light and comfortable. I suspect I will continue wearing these boots at least every other day until my next scheduled Middle East trip in a couple months, unless an unexpected cold wet weather assignment pops up or I receive another new pair of boots to try out.

The photos on this page show my how my Innox Pro Gore-Tex Mid TF boots are bearing up six and a half months after I started wearing them. They are not particularly pretty as I have deliberately not maintained them to see just how they would fare, but it should not take much work to spruce them up if I need to. Often after an initial wear test and review I will slip a pair of Svartz footbeds in, as a medical condition means I must take very good care of my feet, but with these boots I have found no need yet to replace the standard LOWA fabric, foam and felt triple layer insoles / footbeds they came with.

Naturally orders from established customers on the blue light and military sides take priority when a boot manufacturer produces a replacement model and it can take a few months after launch for sufficient stocks to build up to allow private purchasers to be catered for. Originally Task Force Distribution told us it was likely to be the end of 2019 before we could expect to see LOWA Innox Pro availability in the UK, but that was optimistic as this model has been such a hit that it will be early March before spare stocks are freed up for individual sales. However late last week we were informed that pre-orders are now being accepted through the Task Force Distribution website for both Black and Coyote (brown) colours.