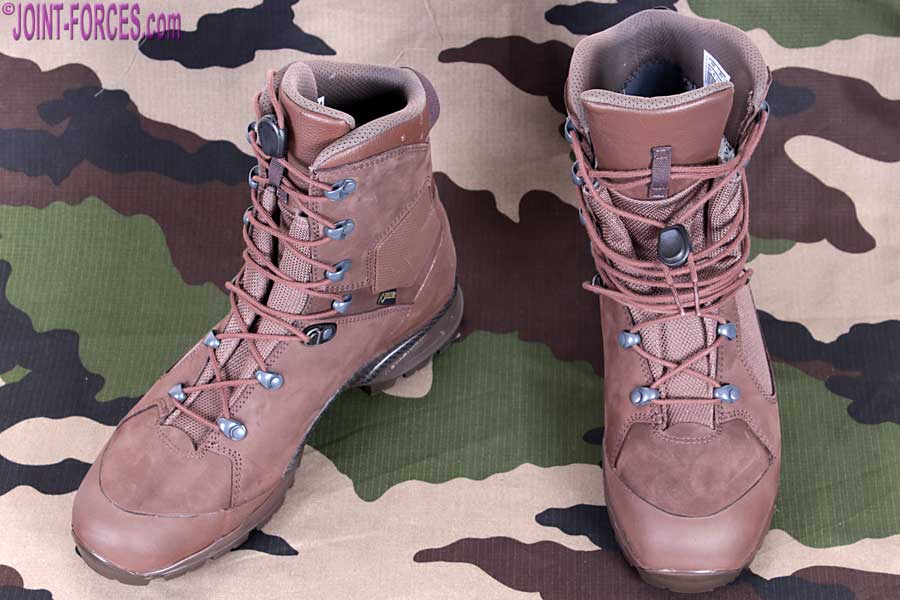 Chaussure de Combat Centre Europe: In 2008 the French Army announced that they would be gradually phasing out the BMJA (Brodequin de Marche à Jambière Attenante, which roughly translates as Marching Boot Adjoining the Leg) in favour of more modern combat boots. Generations of French soldiers, who since World War II had worn the black ‘Ranger’ boot, identifiable by its two rather cute side buckles, were aghast at the proposal even though anyone who had worn the more practical designs of combat boots produced since the late years of the 20th Century must have realised it was time for old traditions to be dropped in a modernising army.

Since the 2008 announcement small batches of black combat boots and tan desert boots were issued, mostly to troops on operations in cold or arid theatres, but in August 2014 it was finally announced that a decision had been made over which model of Chaussure de Combat Centre Europe (i.e. Combat Footwear [for] Central Europe) had been selected from the seven manufacturers who submitted tender bids for a general issue from 2015. Eight makes of Desert Boot were also submitted for a second contract, but no bid was accepted and that one went back to the drawing board.

As is obvious from the pictures, France’s Armée de Terre opted for brown for its new Central European theatre boot and, no doubt much to the disgust of traditionalists, it did not go down the smooth leather route meaning a highly polished finish was now impossible to achieve. But worse than this, in the eyes of some, France picked the German manufacturer HAIX (albeit through an Alsace-based subsidiary in Eckbolsheim, HAIX-France) to shoe its soldiers for temperate climates. My opinion in late 2014, having worn the new boots in both a warm Cyprus and a chilly Poland, was that CESCOF (Centre d’Expertise de Soutien du Combattant et des Forces) had done their troops a big favour.

A predominantly Nubuck leather boot with a textile outside panel and tongue section, the Chaussure de Combat Centre Europe had quite a high partial rubber rand to protect toe and heel from scuffing plus it had HAIX’s ankle protection rubber pads on both the inside and outside of the foot. The lining was one of the then latest laminates from Gore-Tex, which was both durable and waterproof yet breathable, offering both climatic comfort and protection from chemicals and pathogens. The upper padding was memory foam for additional comfort, composition of the polyurethane heel and the sockliner gave cushioning and insulation, there was a nylon midsole for both foot stabilisation and protection from penetration by sharp objects, and the non-slip and anti-static sole was by Vibram. For warmer climes, the standard insole could be replaced by a moulded mesh insole (supplied) which assisted with ventilation and cooling.

At the time I stated “These are quality boots” and my opinion was borne out when what was christened the HAIX Nepal PRO model became generally available and turned out to be a best-seller for the late Ewald Haimerl’s Bavarian company.

Roll forward to 2022 and the new HAIX Chaussure de Combat Zone Tempérée model is beginning to replace the now eight year old Chaussure de Combat Centre Europe model, which more recently has been issued in coyote tan rather than dark brown. The latest boot is of slightly lower cut at the rear, reflecting the modern military boot trend, and is suede rather than Nubuck to reduce maintenance, but many of the design innovations of the CdCCE have been carried over to the CdCZT.