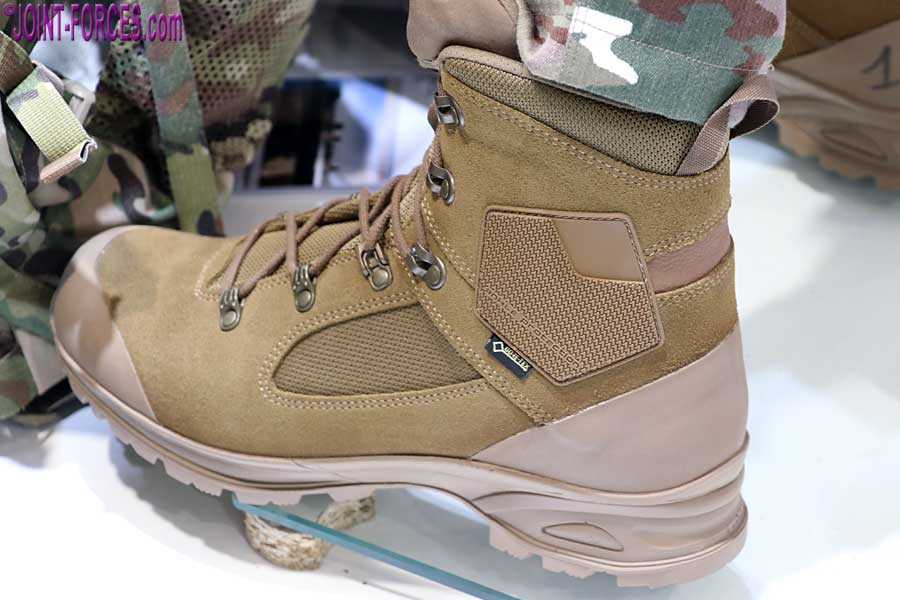 The recent contract award, based on an October 2020 tender requirement, was shared between between two supplier ~ this gives troops an alternative fit to best suit their comfort requirements ~ and HAIX was awarded 60% of the total for their new style. Bulk delivery is due to commence in the second half of 2022. (Although I suspect I know who the second supplier is, until I receive formal confirmation from either the company or their UK distributor I intend keeping my powder dry.)

A direct replacement for the the dark brown 2014 HAIX Chaussure de Combat Centre Europe (Combat Shoe Central Europe) or CdCCE model, which more recently has been supplied in a coyote tan desert version, the new CdCZT boot is produced in suede, rather than the more maintenance-intensive Nubuck leather of earlier boots. According to the HAIX data sheet for Art. Nr. 203331, the primary Upper material is 2.0-2.2mm waterproof, hydrophobic and breathable thick split cow leather; the secondary material used for the lower outer side panel and colour plus the tongue is not specified, but I suspect it will be Cordura. At this stage I should point out that there are actually two different boot models in my close-up photos ~ the boot on the left it the soon to be issued CdCZT and the one on the right, identifiable by the zip-tie through the lower lace furniture, is a Desert variant which HAIX have developed but the French MoD has not yet procured; the Uppers are perforated for ventilation and it has no Gore-Tex membrane.

The Rubber / Polyurethane composite outsole is produced by Vibram and is of well-proven design with a tread intended for both street and terrain use. It is said to be abrasion-resistant, slip-resistant and fuel-resistant as well as offering excellent cold and heat insulation. According to HAIX, this tread offers optimum rolling characteristics due to its sporty toe and heel bounce, and having worn several boots with this particular outsole I tend to agree.

A moisture-absorbing synthetic / fleece insole, which is said to be dimensionally stable, torsionally rigid, and reduces pressure caused by stones etc., is fitted along with a cushioning and moisture wicking insert or midsole. Its separate heel cup is said to provide good cushioning and foot guidance and there are also ‘AIRFLOW’ channels to assist foot ventilation. I cannot vouch for any of these claims, as of course I have not yet been able to try this new combat boot for myself, but past experience of wearing several different HAIX models across more than a decade tells me the sales pitch will be of the expected German accuracy.

The well-proven GORE-TEX Extended waterproof and highly breathable, abrasion-resistant lining laminate is used to help keep the water out as well as giving a comfortable feel and the usual HAIX Climate System, which uses the pumping motion created when walking to transports moisture to the ventilation openings on the upper, is built into the design.

Turning now to the laces, the usual HAIX two-zone lacing system allows separate adjustment of the shoe to the foot and the upper area, but rather than the mid-point D-ring lace lock found on earlier models a newer nylon lock is used at position three. The two lower lace positions are closed hoops and the upper three have ball bearings for faster and smoother adjustment when tying and, as previously, there is a lace pocket – though this time in the tongue rather than on the outside of the foot as per the CdCCE model. The expected ankle protection rubber HAIX pentagon is found on the outside face only, with a leather pad used on the inside. Finally, both heel and toe are protected by a decent sized rubber rand.

My initial impressions of this boot necessarily have to be purely visual, but with HAIX I normally find that if a boot looks right it is right, as their design (German) and manufacturing (Croatian) processes are second to none. With the much-delayed UK MoD combat boot tender process expected to start quite soon, it would not surprise me in the least if the Bavarian company pitched both the CdCZT and its Desert equivalent into the ring for the Combat High Liability and Desert Combat High Liability requirements… though of course at this time nobody in the company was prepared to ‘confirm or deny’.