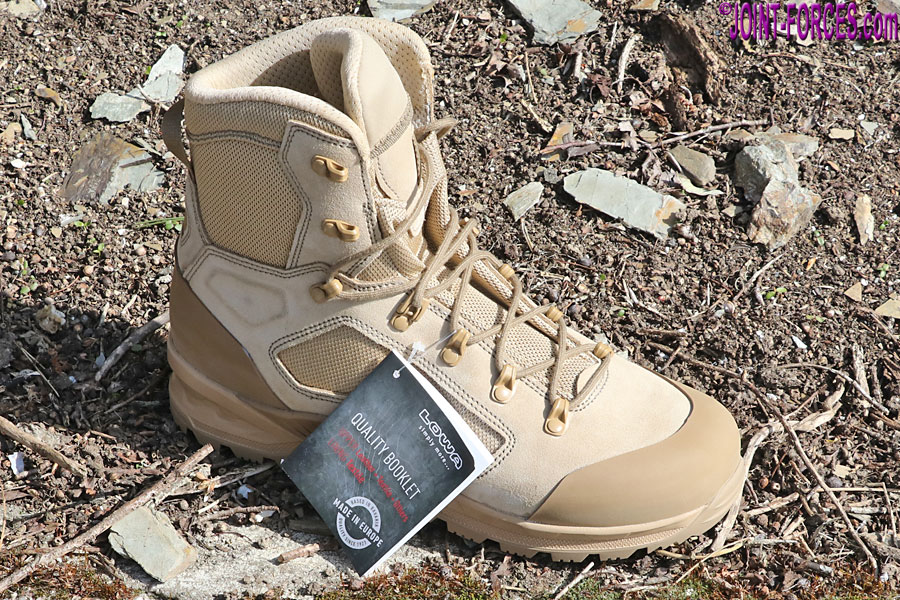 Last week we were able to look at the new LOWA Breacher combat boot range which will shortly be available for unit and private purchase in the UK, reports Bob Morrison.

This new boot range, which will be available in the UK from both the official LowaMilitaryBoots website and select specialist military kit retailers, replaces a number of older models in the LOWA mountain, combat and patrol ranges and is being produced in both high leg and mid height versions; though we are primarily looking at the MID rather than HI models as this height is currently most in demand. In simple terms, the first stage of the roll-out means:-

Uppers, dependent on model, are 2.0-2.2mm Full Grain, Nubuck or Suede leather with Cordura panels and in the case of the GTX versions it is a Gore-Tex Professional laminate lining that is used. A Vibram Vanguard sole is fitted, ankles are protected with LOWA AS technology, and the mid-height version has a two-zone , seven-eyelet, closed lacing system with a lace lock at the fourth position. Both toe and heel areas are protected against knocks and scuffs.

In due course there will be seven different Breacher mid-height boot models, of which three (Black, Brown and Coyote) will have GTX laminate lining and four (Black, Brown, Desert and Coyote) will have non-membrane linings. Both normal and wide versions on either male or female lasts can be specified with a Ws suffix denoting Women’s and a W suffix denoting a Wide fitting. Male boots will be available in half sizes from UK 6.5 to UK 12 and in full sizes up UK 15 (that should please Mike Gormley, who has Yeti-sized feet) and in female last sizes from UK3 to UK9. All versions have been fully certified as Occupational Footwear in the Working Boots category.

As only the advance samples, in industry standard UK8, had arrived at the time of my visit to the LOWA UK warehouse I have not yet had the opportunity to wear test any of these boots but my initial impression was that they look the part and I hope to have the chance to try out at least one of the range in due course. However at present I am still evaluating the LOWA R-8 GTX THERMO cold wet weather boot before it gets too warm to wear these winter boots… and of course I only have one pair of feet.

For those who prefer or need a high leg boot, the Breacher N GTX HI Brown will replace the current brown LOWA Combat boot but the current black LOWA Combat boot will be replaced by the new LOWA Combat Black Mk II boot rather than one of the Breacher models. Task Force Distribution, the official UK distributors from LOWA military and police / blue light services boots who also operate the LowaMilitaryBoots website, have told us they intend keeping stocks of the current Combat / Mountain models in their Plymouth warehouse until the company stops manufacturing them and there are none left in the main Bavarian warehouse, but if units wish to purchase older models in bulk there may be Minimum Order Quantity restrictions.

¤ In the next article in this section I plan to briefly look at the brand new LOWA ZEPHYR MK2 boot model aimed primarily at the CQB (Close Quarters Combat) or SpecOps user.