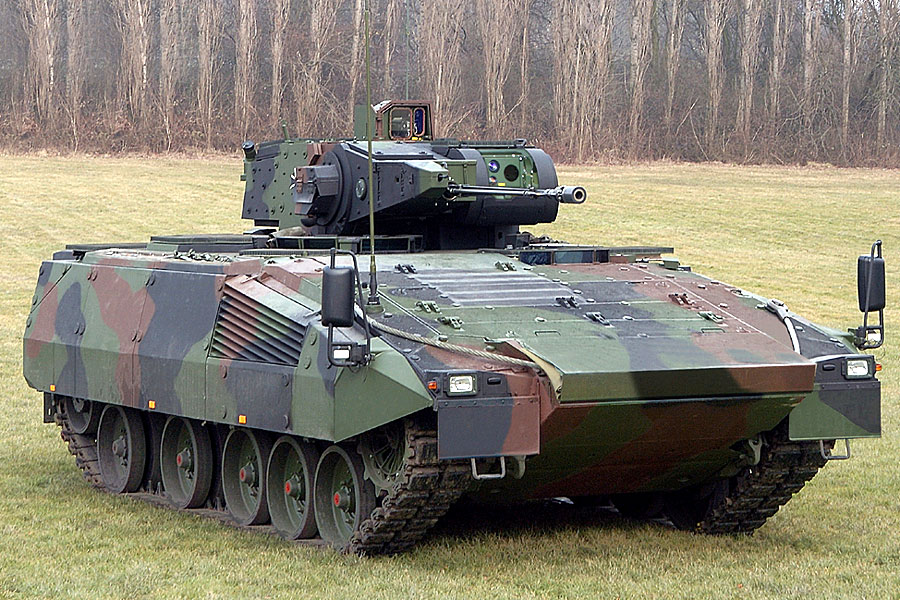 The Schützenpanzer (SPz) Puma armoured infantry fighting vehicle (AIFV) was developed for the Bundeswehr as a replacement for the Schützenpanzer Marder 1, which entered service back in 1971. Development of the Puma was conducted by the PSM (Projekt System & Management) GmbH consortium, a 50/50 joint venture of Krauss-Maffei Wegmann GmbH und Co. KG, or KMW, and Rheinmetall Landsysteme GmbH, or RLS.

The history of the development for a replacement of the SPz Marder 1 dates back into the 1980s. Back in 1984 a first set of tactical requirements for a new armoured infantry fighting vehicle for the German Army was released by the Bundesamt für Wehrtechnik und Beschaffung (BWB, renamed as Bundesamt für Ausrüstung, Informationstechnik und Nutzung der Bundeswehr or BAAINBw in 2012). The plan was to procure 1,000 vehicles between 1997 and 2001. This led to the development of the Schützenpanzer Marder 2 by Krauss Maffei (in 1999, Wegmann & Co. acquired 51 percent of the arms division of Krauss-Maffei, thus the company became the Krauss-Maffei Wegmann GmbH & Co. KG).

A first prototype of the new AIFV, known as Gesamtsystemversuchsträger VT 001 was handed over by the company in September 1991. With a combat weight of 43 tonnes, it was equipped with an MK Rh 503 automatic cannon and had a crew of ten, including seven dismounts. The cannon could be configured to fire 35mm or 50mm ammunition. Due to the changes in the security environment in the early 1990s the development of the vehicle was abandoned in late 1992.

In 1996 the project Neue Gepanzerte Plattform (NGP) was launched. Its aim was to develop a family of vehicles that was based on a universal platform and would replace the Leopard 2 main battle tank and the SPz Marder 1 AIFV as well as the Flugabwehrkanonenpanzer Gepard self-propelled anti-aircraft gun and the Flugabwehrraketenpanzer Roland tracked short-range surface-to-air-missile-system. Budget issues, however, eventually resulted in the project being reduced to the development of an AIFV only in 1998. This vehicle was to be named Neuer Schützenpanzer, meaning New Armoured Infantry Fighting Vehicle. Again, the procurement of 1,000 units was planned.

With the refocusing of the Bundeswehr on stabilisation and peace support operations, eventually the requirements for the Neuer Schützenpanzer had to be adjusted; one of the major requirements now being air transportability inside the A400M Atlas transport aircraft, limiting the total vehicle weight to 32 tonnes. Another requirement was a high degree of armour protection against ballistic and mine threats. The vehicle was now referred to as Panther AIFV and earmarked to enter service as early as 2004. Eventually this ambitious aim had to be abandoned and it was not before September 2002 that the German government ratified the budget for the development of the new AIFV, now being referred to as Igel, meaning hedgehog.

Development of the SPz Puma

In autumn 2002, finally, the development contract for a new AIFV for the Bundeswehr was signed with the PSM Projekt System & Management GmbH. It included the production of one Gesamt System Demonstrator (GSD) complete prototype and several Teil System Demonstratoren or component trial systems. The contract was followed in December 2004 by a another one covering the production of five pre-production vehicles, and containing an option for up to 405 series production vehicles.

In 2003 the GSD was completed, the vehicle was now referred to as SPz Puma. On 20th December 2005, after completing company trials the vehicle was officially presented to the Bundeswehr for the first time. By mid-2008 the five pre-production vehicles had been delivered and underwent user trials at various test facilities of the Bundeswehr, such as at the Wehrtechnische Dienststelle 41 in Trier for ground vehicles and engineer equipment or the Wehrtechnische Dienststelle 91 in Meppen for weapons and ammunition. As a result of the trials many modifications became necessary, for example the gas hydraulic suspensionsystem was fitted with new hydrop components, the engine displacement had to be enlarged, a modified torque converter was installed, new drive sprockets were fitted and the number of road wheel pairs on each side was raised from five to six. The protection concept of the hull was also revised in order to further improve the protection against shaped charges and IEDs.

As a result of all these measures the combat weight of the vehicle went up, resulting in issues with its air transportability. While the vehicle could still be transported with the A400M Atlas, it was not now fully operational once unloaded. Yet combat readiness could be achieved by the crew with the support of a fork-lifter or light crane in a given time.

In March and April 2009 user trials were conducted by the Panzertruppenschule school for units of the reconnaissance, armoured infantry and tank branches of the German Army. Then on the 17th of June 2009 the German government approved the budget for the procurement of 405 series production SPz Puma.

The first two series production SPz Pumas were handed off to the Bundeswehr on the 6th of December 2010. Following this the first nine series production vehicles were employed for extensive user trials, conducted in order to approve the series standard. Again carried out at various test facilities of the Bundeswehr, this included cold weather trials in northern Norway and later on in 2013 hot weather trials conducted in the United Arab Emirates.

Between May and July 2013 final tactical user trials were conducted by the Munster based Panzergrenadier Lehr Bataillon 92 (an armoured infantry battalion) and the Panzertruppenschule. These trials involved four SPz Puma. Around the same time the Technische Schule des Heeres für Landsysteme und Fachschule des Heeres für Technik (TSL/FSHT) or school for land system technology conducted final user trials in the field of maintenance and sustainability with one SPz Puma. While the trials were still in progress it was decided to procure only 350 SPz Puma instead of the planned 405, as the Bundeswehr was supposed to focus on stabilisation and peace support operations abroad.

On the 24th of June 2015 the first SPz Puma in the Nutzerstufe 1 user configuration was finally officially handed over to the German Army. In a ceremony held at the Unterlüß facility of RLS its ‘keys’ were handed over to Generalleutnant Rainer Korff. Some 44 years after the SPz Marder 1 AIFV entered service, the SPz Puma would take over its place as the main combat system of the Panzergrenadier Truppe (armoured infantry branch) of the German Army. The last series production vehicle was eventually handed over in December 2020.

Half of the vehicles were assembled in Unterlüß at an RLS facility, while the other half was manufactured at a KMW facility in Kassel. Of the 350 SPz Pumas delivered, eight were Fahrschulpanzer or driver training vehicles. The conversion of another four to driver training vehicles and one into an Ausbildungsgerät Wanne or hull training system for the training of maintenance personnel is planned. Due to the fact that it was planned to procure another batch of SPz Pumas the vehicles are also known as SPz Puma 1.Los, with Los meaning batch.

¤ Note: Some compound German terms have been broken down.