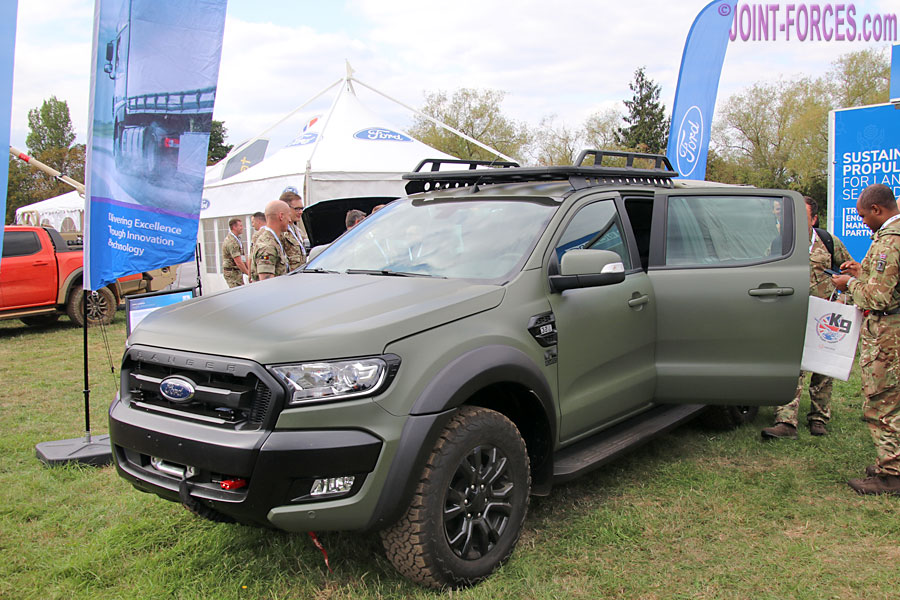 Ford Motor Company produced well over a quarter of a million Jeeps during Word War II and they both designed and originally manufactured M151 Military Utility Tactical Truck or MUTT of the late 1950s, but until quite recently they were not perceived as being major players on the light and medium utility vehicle scene. Since the end of the 1990s the larger and heavier Ford F-Series Super Duty pick-up truck family has been a little more successful on military markets, however over the last decade it has been the Ford Ranger and Ford Everest family of vehicles which has quietly been making inroads.

The Ford Ranger family of compact and medium sized pick-up trucks has evolved through several generations over the last forty years and, as there has been design input from both non-American subsidiaries and other marques closely associated with the Michigan-based company, this is quite a complicated story. For simplicity, I am just going to refer to the 1998-onwards ‘International’ version of the Ranger produced in collaboration with Mazda of Japan, and the more recent T6 version designed by Ford Australia and produced from 2011 onwards for non-US markets. To further complicate matters, a redesigned T6.2 or T6 New Generation model was introduced at the end of 2021 and also the Ford Everest is essentially the SUV (Sports Utility Vehicle) sibling of the Ford Ranger.

The vehicles displayed by Ford’s European sales team on the Millbrook Proving Ground at DVD 2022 were of the latest T6.2 design and they were in civilian colours; until details are made public about precisely which suppliers UK MoD is inviting to tender for the GSUP requirement, and precisely which vehicle models the selected companies are putting forward for trials, we can only assume that it is a militarised version of this pick-up truck that Ford is proposing. In simple terms, Ford offers the T6 Ranger in three separate engine power and/or trim level versions ~ RAPTOR, WILDTRAK and XLT ~ and it was civilian versions of the first two variants that were displayed at Millbrook. As civvy spec sheets sometimes have little in common with what is actually offered for military users, I don’t intend to delve much further into detail until it is confirmed which specification, if any, is actually being offered by Ford for GSUP.

Shoreham-based Ricardo, first at DSEI 2021 and then at DVD 2022, displayed earlier T6 base model Rangers and as their stand was located right alongside Ford at Millbrook it is almost certain that the two companies intend working closely together for UK MoD requirements; including, no doubt, both the GSUP and Special Operations Brigade programmes. On promotional material at DVD Ricardo mention that one Ford Ranger option is the 213 PS 2.0-litre Ford EcoBlue Bi-turbo diesel powertrain producing 500Nm of torque mated to a 10-speed automatic transmission, so that is probably a good indication of where they as a company could be heading. Incidentally, Ricardo and Ford have also been heavily involved (along with DCE, TPGroup and DTC) in producing an Optionally Unmanned concept demonstrator version of the Ranger for the UK MoD and this was also on show at DVD 2022; but that is another story.

The Polish Armed Forces have recently started using the Ford Ranger, based upon the T6 XLT version, and first examples were displayed at MSPO 2021 with a handful of in-service vehicles being on show at MSPO 2022. As this year’s exhibition overlapped with ARMY EXPO 2022 in the UK I was only able to spend a single day out on the ground in Kielce this year, but I still managed to snap a couple of Ford Rangers at the show. Most interesting of these was a Special Forces gunship variant included in the JWK display and uniformed operators assured me that this vehicle is in service (though of course they couldn’t disclose precisely where).

It might surprise some readers that the VW Amarok, which the Dutch Armed Forces use, is actually also effectively a version of the Ford Ranger; Volkswagen and Ford having collaborated on several vehicle designs since the mid-1990s.

The Arquus VT4 TRAPPER, now in widespread service with the French Armed Forces, is a militarised version of the five-door Ford Everest and the Arquus VT4 TRIGGER pick-up version is its Ford Ranger sibling. There are more Ford Rangers around in military service than one might realise, so the British Army adopting a Ford as its Land Rover Wolf replacement is maybe not quite as unlikely as one may think… though I doubt they will be in that gaudy ‘tomato soup’ colour scheme seen at Millbrook.