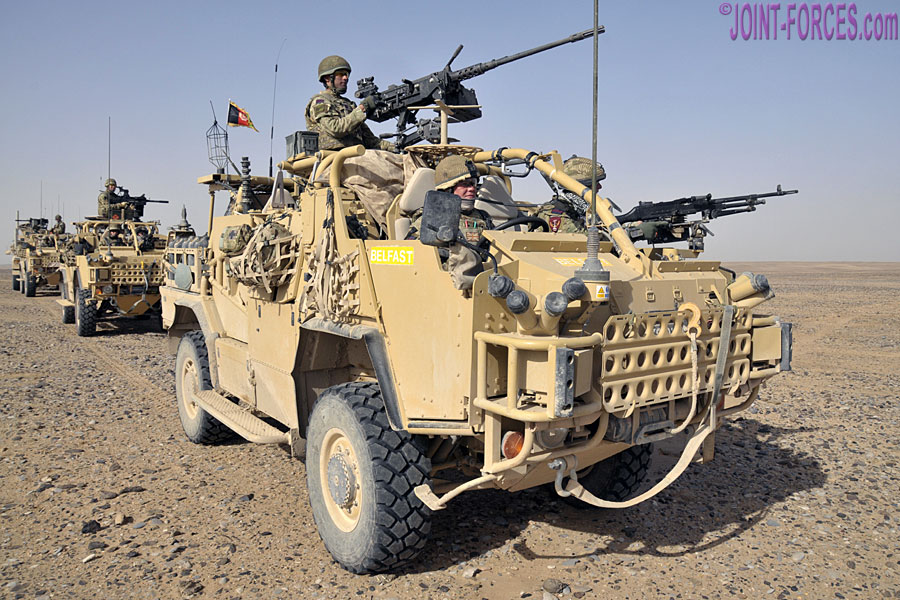 1st Battalion Irish Guards on patrol in Afghanistan in early 2011 - the first vehicle is a JACKAL 2, while the second is a JACKAL 2A [© Carl Schulze]

JACKAL 2 HMWP: Right from the beginning the JACKAL 1 High Mobility Weapons Platforms proved themselves well during operations in Afghanistan and were praised by their operators. Therefore it is no surprise that the UK Ministry of Defence decided to order additional examples in order to increase the Forces’ inventory of protected mobile fire support vehicles.

In April 2009 another 120 JACKALS were ordered from Supacat Limited. These were JACKAL 2 HMWP that featured many modifications compared to the initially produced batches. Most of the modifications were based on experiences learned in Afghanistan. The JACKAL 2 HMWP features a different engine in form of the Cummins ISBE 6.7-litre, 6-cylinder, turbocharged, inter-cooled diesel engine, as the power pack previously fitted to the JACKAL 1 was no longer produced. The ring mount for the heavy machine gun and the grenade machine gun was installed at a higher point and further forward in order to allow a more unrestricted use of the heavy weapons.

The JACKAL 2 also features a larger cargo bed with racks for jerrycans that can be hinged outwards. The spare wheel mounts are now situated inside the ballistic perimeter armour. An additional seat was also installed next to the one in the area below the ring mount, allowing the vehicle to operate with a crew of four or to transport a passenger or interpreter. The JACKAL 2 has a kerb weight of 5,760kg and a gross vehicle weight of 7,600kg.

JACKAL 2A HMWP: In May 2010 the Ministry of Defence ordered another batch of JACKALS. These 140 vehicles were all delivered by 2011 and again featured several improvements; to differentiate they were given the designation JACKAL 2A. The JACKAL 2A variant features increased ballistic and mine protection and a revised cab, made of steel instead of aluminium, that has integrated blast protection. The ballistic protection kit fitted to the vehicle is based on the Modular Armour Protection Installation Kit (MAPIK) developed by Jankel Armouring Limited. The JACKAL 2A High Mobility Weapons Platform is 5,790mm long, 2,050mm wide and between 1,885mm and 2,445mm high (dependent on the setting of the level control system).

Well Suited For Role: With the JACKAL, regardless whether it is a 1, 2 or 2A variant, the units equipped with the vehicle under the Army 2020 structure have received an extremely capable vehicle that, in addition to an outstanding off-road performance, also offers a certain degree of ballistic and mine protection. Its armament, consisting of a GPMG and a heavy machine gun or grenade machine gun, suits the vehicle well for its role as fire support platform but also qualifies it for the reconnaissance role, allowing its crew to return heavy fire when running into trouble.

Into Core Vehicle Fleet: On the 16th of December, 2013, with the end of Operation HERRICK in 2014 already in sight, the then Parliamentary Under-Secretary of State for Defence, Mr Philip Dunne, declared that some 2,000 Protected Mobility Vehicles procured as UORs would be integrated into the core vehicle fleet of the British Army; among them 441 JACKAL 1, 2 and 2A High Mobility Weapons Platforms. It was later decided to equip the Light Cavalry Regiments, newly formed under the ARMY 2020 restructure, as well as the Support Companies of the Air Assault / Parachute Infantry Battalions and Mechanised Infantry Battalions of the regular forces with JACKALS.

Under ARMY 2020 the Air Assault / Parachute Infantry Battalions belonging to 16 Air Assault Brigade, formed part of the newly constituted Reaction Force of the British Army, while the the Light Cavalry Regiments and the Mechanised Infantry Battalions belonged to the new Adaptable Force; the more recent FUTURE SOLDIER restructuring has changed the situation slightly and hence the need for more JACKALS. In 2016, when the bulk of this article was originally penned, of the three Light Cavalry Regiments each could field three Sabre Squadrons equipped with twelve JACKAL 2s or JACKAL 2As and within the Air Assault / Parachute Infantry Battalions the Anti-Tank Platoon of the Support Company were equipped with a total of twelve JACKAL 1s. In the Mechanised Infantry Battalions the Anti-Tank Platoon and the Reconnaissance Platoon of the Support Company could each field six JACKAL 2s or JACKAL 2As.

Today: Since early 2017, when the United Kingdom commenced supporting the NATO eFP (enhanced Forward Presence) missions in Poland and the Baltic States, a rotating Sabre Squadron drawn from one of the Light Cavalry Regiments equipped primarily with the JACKAL HMWP has been permanently attached to the US-led battlegroup deployed as a deterrent measure close to the vulnerable Suwalki Gap region on the Polish – Lithuanian border. This narrow choke point between the Baltic States of Lithuania, Latvia and Estonia and the bulk of the European Union is just 65km (40 miles) wide and if Russian Federation troops were to break through from Belarus to link up with their heavily militarised Kaliningrad Exclave the overland route to the three independent NATO nations would be cut off.

Footnote: Much of this article was first printed in mid-February 2016 in COMBAT & SURVIVAL Magazine, which sadly ceased publication two years later on the closure of the company which produced it and several other newsstand titles.