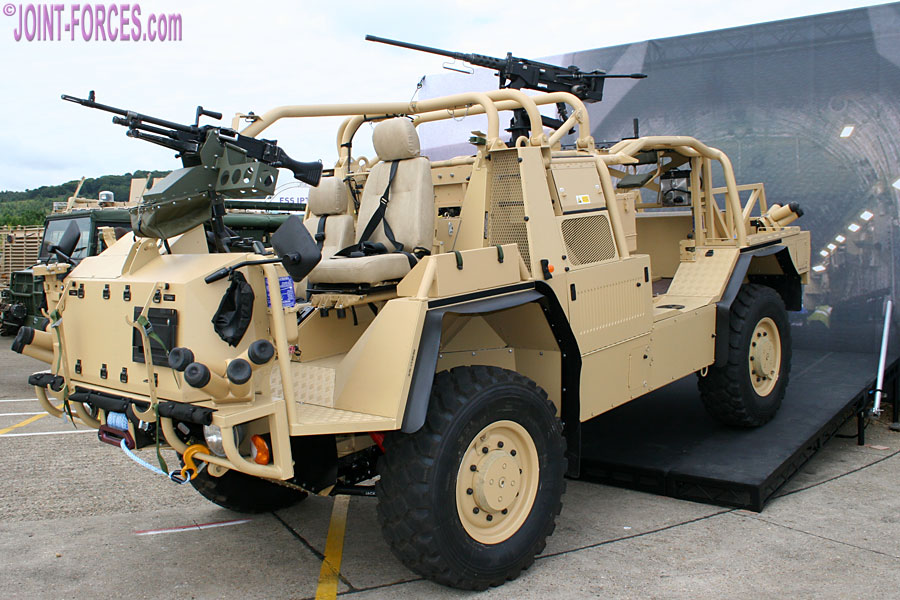 The recent post about the UK MoD Procuring At Least 75 Additional Supacat HMTV generated such a high volume of extra website traffic, not to mention attracting quite a few likes / loves / comments etc. on our social media profiles, that it prompted us to delve back into our collective archives to draw out some old images of the Supacat HMT prototypes and the subsequent JACKAL production vehicle that have not seen the light of day for a while. At the end of 2015 Carl also authored an interesting magazine article on the evolution of the Supacat JACKAL as used by the British Army and as there must be many viewers of this website who did not have the opportunity to read this when first published we intend to give it second wind in Parts Two and Three.

In the beginning: Following the 1991 Gulf War Britain’s SAS (Special Air Service) were looking to replace some of their well-used Land Rover One-Ten Desert Patrol Vehicle (DPV) fleet plus the small number of larger Unimog ‘mother ships’ and so, to cut a long and quite secretive story short, by 1995 a pair of prototype 4×4 vehicles based on a South African 4×4 chassis produced by Reumech were under development to meet the UK MoD requirements. Alvis plc of Coventry, later to become part of BAE Systems, were contracted as the prime contractor (under I believe the designation Project TURTLE) for these prototypes and they sub-contracted Supacat Ltd of Devon to produce the upper hamper for them on the Reumech 4×4 chassis; Supacat founder Nick Jones would later say, “we knew that it would not work from the moment we saw it… that got us thinking we could do something better”. Subsequently named the SHADOW by Alvis, this original brace of vehicles did not progress beyond trials stage and later passed into private hands.

By 1998 Supacat had not only created a better design of their own but had built the HMT 001 (High Mobility Transporter) prototype to prove the concept. They also produced a 6×6 prototype, HMT 002, and I was fortunate in being allowed a drive in both at the MoD’s Chertsey test track; not as fortunate as our Mike Gormley, however, who both worked for Supacat at the time and was heavily involved in various driver trials.

The original mid-90s UK Special Forces requirement had been for a three/four-man vehicle which could carry greater payload than a Land Rover while still being both small and light enough to fit inside an RAF CH-47 Chinook helicopter, yet it also needed to have a road speed of 130km/h and a long range for deep penetration missions. Rather than trying to convert an existing vehicle chassis, the Supacat team (who in the 1980s had created the 6×6 ATMP or All Terrain Mobile Platform for Britain’s Airborne Forces) decided to design from a clean sheet using racing car technology.

They opted for a space frame chassis with a low, mid-position engine to keep the centre of gravity down and balance the weight across both angles, but to give the required off-road performance when needed they designed, and patented, an unique variable ride height air suspension. Supacat offered the HMT prototype to the UK MoD and, after evaluation, in 2001 an initial batch of 65 vehicles was ordered under Project MINACITY (spelling given as MENACITY in 2007 Select Committee on Defence Minutes of Evidence). As these vehicles were procured exclusively for UK Special Forces the UK MoD does not encourage publication of photographic coverage of them in service.

By 2004 US Army Special Forces had also adopted a version of the Supacat HMT 400, known as the Marauder, and two years later the Australian SAS Regiment also procured a version, known as the Nary. Subsequently Denmark, Estonia and Norway also procured versions for their Special Forces and Australia’s 2nd Commando Regiment procured their own Special Operations variant. Ordered in 2007 to meet an Urgent Operational Requirement for the ISAF deployment (Operation HERRICK) in Afghanistan’s Helmand Province, the British Army JACKAL HMWP (High Mobility Weapons Platform) is effectively a further evolution of the HMT-based MINACITY.

¤ Carl Schulze will take over the JACKAL HMWP story for Part Two.