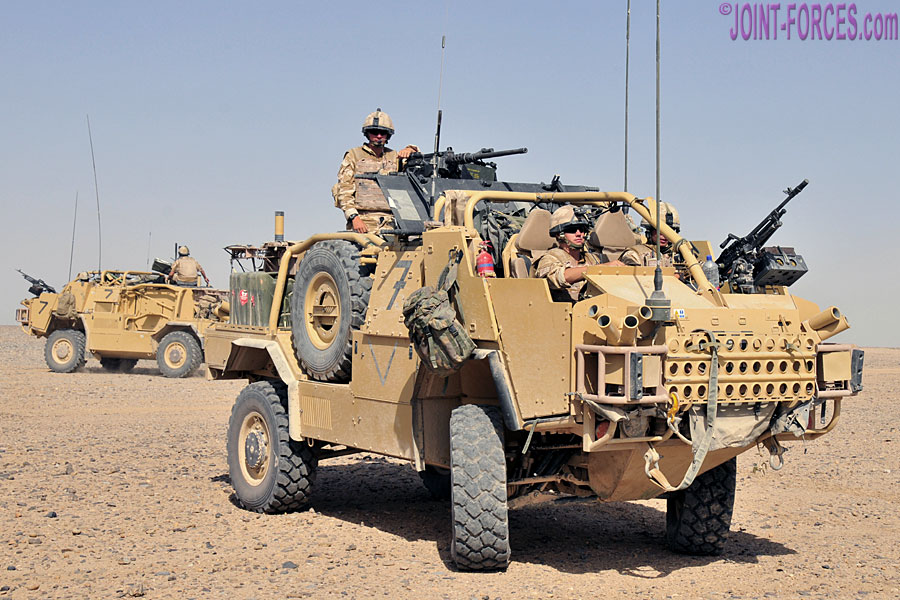 The JACKAL High Mobility Weapons Platform or HMWP is based on the Supacat High Mobility Transporter (HMT) family of vehicles, writes Carl Schulze.

Between 2007 and 2011 the British Army procured several hundred of the JACKAL 1, JACKAL 2 and JACKAL 2A variants in order to address an Urgent Operational Requirement (UOR) by troops deployed to Afghanistan under Operation HERRICK for a highly mobile, protected fire support and patrol vehicle. Once the ISAF deployment of UK Forces in Helmand Province concluded it was decided to integrate 441 of these JACKAL High Mobility Weapons Platforms into the British Army Core Fleet.

The first JACKAL, later suffixed with 1, HMWP entered service with the British Army in November 2007 and fielding in Afghanistan started in early 2008. On Operation HERRICK these vehicles mainly replaced the Land Rover Defender 110 XD Wolf FFR WMIK (Weapons Mount Installation Kit) and the better protected Defender 110 R-WMIK+ variants. While the Land Rovers had served the troops well in Afghanistan as reconnaissance and fire support vehicles, they lacked the required high level of ballistic and mine protection.

In total 202 JACKAL 1 High Mobility Weapons Platforms were ordered in two batches in 2007 and 2008, with another 40 being procured later as replacements for vehicles damaged beyond repair in battle. In Afghanistan these vehicles were mainly employed for reconnaissance tasks, providing manoeuvre support to dismounted operations, mobile patrolling, convoy protection, route protection, interdiction operations and cordon & search operations.

Technology: The all-welded steel chassis of the JACKAL 1 HMWP is of the space frame type and has a box section structure. The cab is situated at the front, above the front axle, and offers space for two. The driver is seated on the right and the vehicle commander on the left. A robust roll cage provides protection for the crew in case of a rollover.

A hydraulic winch manufactured by Red Winches is installed at the front, below the cab. The engine and transmission are positioned in the area behind the cab. The JACKAL 1 HMWP is fitted with a Cummins ISBE 5.9-litre, six-cylinder, Euro III, turbocharged diesel engine that develops 185hp. The engine is connected to an Allison 2500 five-speed automatic transmission with five forward gears and one reverse gear. A two-speed transfer case operated by a pneumatic selector allows the vehicle to be operated in high and low ranges as well as to isolate the gearbox for towing operations.

The vehicle can be driven in all-wheel drive or in two-wheel drive. The final-drive units have limited-slip differentials. Epicyclic hubs transfer power to wheels fitted with Michelin X 335/80R 20 XZL tyres. The steering system is power-assisted and works on the front wheels. The vehicle has a turning circle of 12,500mm.

The vehicle has two fuel tanks, one mounted on the left side and the other at the rear; in total these can hold 202 litres. On one filling of both tank the vehicle has a maximum road range of 800km. On roads JACKAL can reach a top speed of 129km/h while up to 89km/h is possible when travelling over rough terrain. It can ford water obstacles up to 1,000 mm deep, climb gradients up to 45° and traverse slopes with an angle of 35°.

The JACKAL 1 HMWP has a gross vehicle weight of 6,550kg. It is 5,540mm long, 2,000mm wide and 2,530mm high (with the level control system set to extreme terrain). The armament of the vehicle comprises a 7.62x51mm L7A2 GPMG mounted in front of the commander’s seat in a swing mount manufactured by Istec Services Limited, a smoke grenade discharger system with batteries of four launch tubes each mounted at all four corners of the vehicle and a 12.7x99mm L111A1 QCB heavy machine gun or 40mm L134A1 GMG (grenade machine gun) installed in the ring mount fitted to the roll-cage of the vehicle. Other systems fitted include an ECM/EECM RCIED system, BOWMAN communication equipment, a Pegasus range compass manufactured by SIRS Navigation Limited and infra-red (IR) lights.

Footnote: The bulk of this article was first printed in mid-February 2016 in COMBAT & SURVIVAL Magazine, which sadly ceased publication two years later on the closure of the company which produced it and several other newsstand titles.