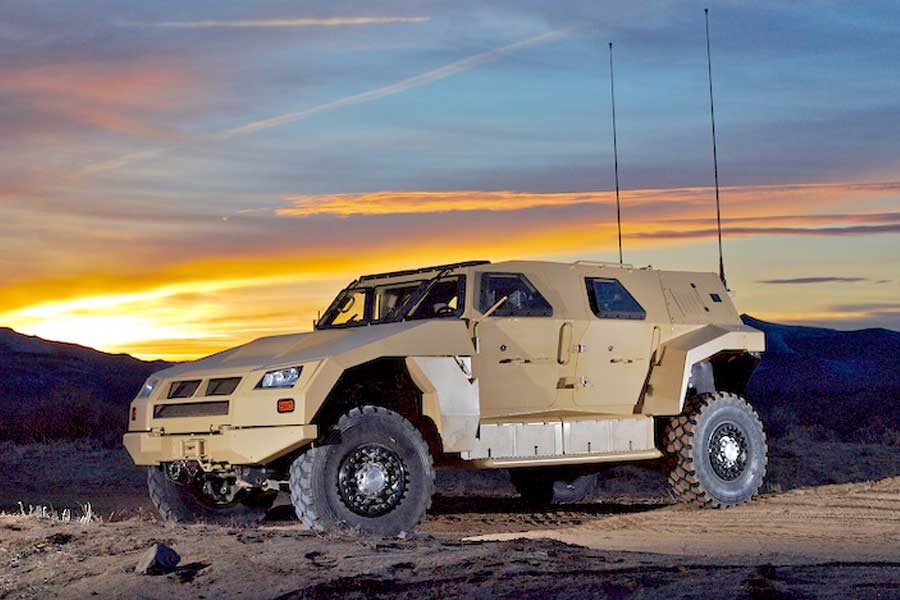 The Valanx from Navistar and BAE Systems was an early contender for the US JLTV (Joint Light Tactical Vehicle) programme, writes Bob Morrison.

Occasionally, when trawling through my archives to research a vehicle or topic, I stumble across info on a prototype or concept which briefly flared in a burst of publicity only to be forgotten as the procurement project subsequently evolved in a different direction. While recently checking my files for original reference material on another vehicle type I discovered a press release (see below) on the unveiling of the Valanx 4×4 and reckoned some readers might be interested to see the original photos and the (low resolution) company promo video from 2008.

The Valanx 4×4, proposed for the original 2008 US Army and US Marine Corps programme to replace a portion of the already 20+ year old HMMWV (High Mobility Multipurpose Wheeled Vehicle or Humvee / Hum-vee) fleets with an armoured 4×4 utility vehicle, was created as a joint venture by Navistar International (formerly International Harvester) and BAE System. Seven consortia responded to the initial US DoD proposals request in February of that year and in the October three teams ~ BAE Systems/Navistar with Valanx, General Tactical Vehicles and Lockheed Martin ~ were awarded contracts to deliver seven prototypes apiece, which they did by mid-2010.

The project then stalled for a while, because client requirements had changed in light of evolving operational experience, before new Engineering and Manufacturing Development phase details were announced in early 2012. A seventh entity now joined the process, with some of the original consortia by now having disbanded, and in due course three manufacturers ~ AM General, Lockheed Martin and Oshkosh ~ were contracted to each build 20+ prototypes. Navistar were not selected, resulting in the Valanx quietly slipping away, and in due course Oshkosh won the original JLTV procurement contract (which incidentally is now subject to a re-buy, but that is a different story).

I never had the opportunity to see far less drive the Valanx, and I do not believe any prototypes crossed the Atlantic, but I would have liked to have taken a spin in one as it looks like it was an interesting design.

“Our approach to the JLTV programme is focused on the Warfighter,” said Matt Riddle, vice president of Wheeled Vehicles at BAE Systems. “The BAE Systems – Navistar JLTV team has taken a warrior-centric design approach that provides the foundation for a future family of vehicles that will meet the Joint Services’ light tactical vehicle requirements for decades to come.”

The BAE Systems – Navistar JLTV design optimises what’s referred to as the ‘iron triangle’ – payload, protection and performance – to meet all requirements of the JLTV programme. The 16,000-pound vehicle incorporates lessons learned from the US Department of Defense’s Mine Resistant Ambush Protected (MRAP) vehicle programme and features the latest in lightweight, advanced armour and a v-shaped hull design to provide unmatched crew protection. The vehicle will out-perform existing tactical systems by providing exportable power that exceeds JLTV requirements and existing MRAP capabilities. Its modular design maximises commonality across JLTV variants and enables the seamless integration of future technologies.

BAE Systems and Navistar announced their collaboration in October 2007 to take advantage of combined capabilities that most effectively support the JLTV programme.

The teaming arrangement builds off the two company’s current leadership in armoured and tactical vehicle development and support, which includes the team working together for the benefit of the joint U.S customer on programmes like MRAP. Combined, the BAE – Navistar team maximises JLTV programme value through proven capabilities, lean manufacturing and extensive worldwide logistics support. The BAE Systems – Navistar team combined has received nearly three-quarters of all MRAP vehicle orders.

Navistar is the highest-volume MRAP supplier while BAE Systems provides the most MRAP variants. On average, Navistar produces more than 100,000 vehicles per year and produced more than a half-million engines in 2007 while BAE Systems has successfully produced and supported more than 200,000 combat and tactical vehicles – making them the largest non-governmental producer of armoured vehicles in the world.