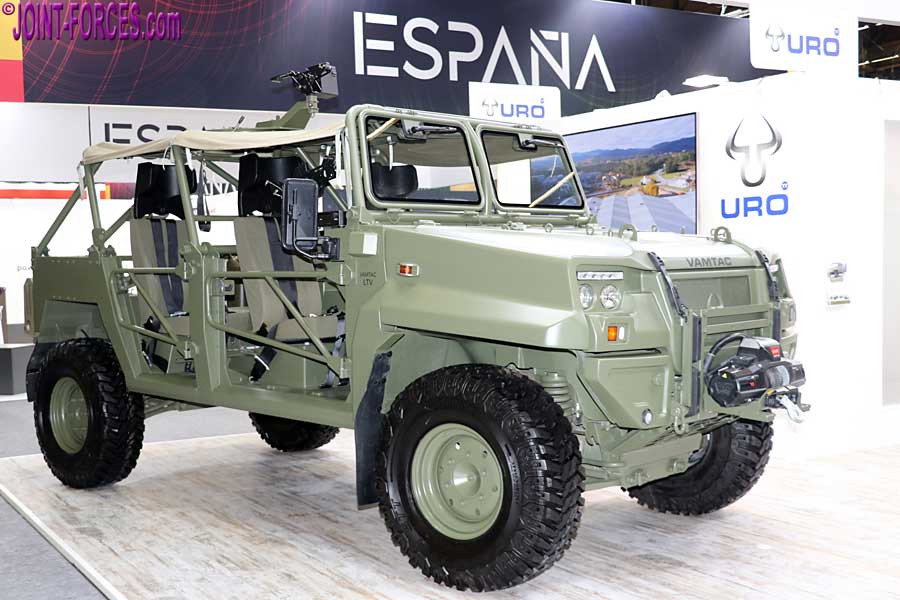 Ready for production in 2018, the URO VAMTAC (Vehículo de Alta Movilidad Táctico or High Mobility Tactical Vehicle) LTV variant was publicly displayed at the FEINDEF defence and security expo in Madrid in November 2021 and the new SOV (Special Operations Vehicle) version was shown at Eurosatory 2022 in Paris this June.

The original VAMTAC, a Hum-vee / HMMWV lookalike produced in both softskin and armoured versions over the last 25 years, has evolved into quite a heavy vehicle (up to 8500kg for some armoured versions) with many of its variants unable to be driven by soldiers who do not possess a truck category entitlement on their driving licence. The LTV (Light Tactical Vehicle) variant, recognisable from the frontal arc by its higher and more rounded bonnet / hood plus its one-piece windscreen, was designed from the outset to have a maximum GVW under 4500kg. Presumably UROVESA are aiming at a SANTANA ANÍBAL MILITAR 4×4 potential replacement as the utility vehicles batch ordered for Spanish Army service in 2007 is reaching the end of its planned 15-year service life. The Ejército de Tierra is currently in the throes of long-term modernisation, with both early VAMTAC versions and the ANÍBAL fleet earmarked for replacement in the not too distant future.

The standard VAMTAC LTV (Light Tactical Vehicle) displayed at FEINDEF 2021 was not exhibited at Eurosatory 2022 but a hitherto unseen LTV SOV (Special Operations Vehicle) variant was shown on the UROVESA stand, along with a VAMTAC ST5 Armoured Ambulance developed for a Portuguese Army contract and a forward control VAMTAC SK cargo / troop carrier variant. This minimalist four-seat SOV shares the same front end, from engine compartment bulkhead forward, plus floor pan and rear cargo tray as the basic LTV but its upper hamper is tubular with a simple canopy for foul weather protection. A machine gun or grenade launcher can be mounted on a pulpit ring on the roll cage, which can be folded to allow transportation inside a CH-47 Chinook helicopter or C-295 transport aircraft.

The SOV prototype displayed in Paris this June had simple independent suspension but a hydraulic suspension system allowing variable ride height is also an option, and another option is hybrid propulsion. Traction is permanent 4×4 with differential locks on both axles plus the transfer case. This prototype was fitted with tubular gates instead of side doors, but lightweight fabric doors and side panels can be fitted if deployed in cold / wet operational theatres, and webbing mesh doors are also shown on one company photo of the SOV. A lightweight appliqué armour package bringing protection up to STANAG 4569 level can also be fitted, though of course fitting this would either reduce the ability to carry 1000kg of payload or would push the vehicle’s GVW above 4500kg.

At time of writing I have not been able to source accurate SOV dimensions from the manufacturer. Photographs of three-door van body and four-door crew cab versions of the LTV, including an air defence version with firing post and flat folding gunner’s platform at the rear, have been displayed on the the UROVESA expo stand since late 2021.