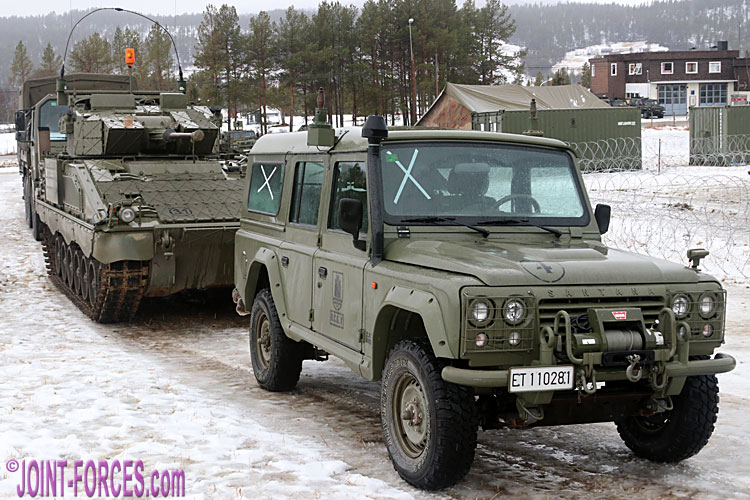 No doubt many readers who are unaware of the story behind this Spanish-built 4×4 utility truck will have confused it at first glance with the Solihull-built Defender, and indeed I have cross-posted this feature in our Military Land Rovers section even though it is NOT one, but although it could quite accurately be described as the bastard offspring of the British Series III Land Rover the two vehicle makes now share virtually nothing but a similar appearance and common roles.

Before discussing the Spanish vehicles used in Norway, it is possibly best that I delve back into history a little to explain the evolution of the Santana line. Back in the mid-1950s Japan’s motor industry was just being kick-started following the nation’s WWII demise and the Toyota Land Cruiser, launched in 1951, was not yet proving to be a serious contender against the worldwide spread of the Land Rover utility vehicle, which had been launched in 1948 and was by now being flat-packed for local assembly under licence around the Commonwealth. In 1955 the company Metalurgica de Santa Ana SA, based in the southern Spanish industrial town of Linares to the north of Granada, entered a licensing agreement with the Rover Company and the following year it commenced production of vehicles under the Santana brand name using a mix of British and locally sourced components.

Visually the SANTANA ANÍBAL is very similar to the Land Rover Defender but roofline, rear door and trim are different [©BM]

By the cusp of the 1970s, Santana Land Rovers were so well established that the company was able to produce two of its own designs, the MILITAR 88 and MILITAR 109, specifically for the Spanish Armed Forces as well as supplying more conventional military specification models for armies, including in Central and South America, which had closer ties with Spain than Britain. The MILITAR, in both long and short wheelbase versions, looked more like the angular Solihull-built Lightweight or Airportable 88” wheelbase model than a conventional Land Rover, but Santana also continued producing familiar-shaped Land Rovers, plus a boxy version in some ways similar to the British Forward Control 101” model, well into the 1980s.

In the early 1980s Land Rover introduced coil suspension, rather than the earlier leaf springs, and as Britain had fully joined the European Community in the middle of the previous decade they decided to take on supplying the Spanish market direct. By this time Santana had entered an agreement to produce Suzuki ‘jeeps’ under licence, manufacturing massive numbers for the burgeoning holiday hire market, and Land Rover was unwilling to share its latest coil sprung technology with the Spanish company, mostly as that could have given Japanese competitors back door access to its design technology, so Santana was unable to make what we now tend to refer to as the Defender but it did continue to produce a leaf-sprung Land Rover lookalike known as the Series IV, or 2500 model, through to the late 1990s.

In the early 1990s the Spanish government decided to replace most of its ageing Santana MILITAR fleet with a new vehicle, and both Land Rover and Santana had high hopes of landing this contract, but by now the giant Nissan car factory was up and running in Catalonia and the Nissan Patrol was selected instead. Now known as Santana Motor Company, the Linares plant continued slowly developing their PS-10 prototypes throughout the decade and early in the new millennium they relaunched them as the SANTANA ANÍBAL (Hannibal) with an Iveco engine; early examples were snapped up by Spanish public utility companies and local government bodies, ensuring the production line could continue until the military was in the market for replacements for the slightly militarised Nissan Patrols; enter the SANTANA ANÍBAL MILITAR seen here.

Iveco bought into the company in 2006 and the ANÍBAL, restyled with a more rounded front end, was re-branded the Iveco MASSIF but this version was not a success. In February 2007, however, the Spanish Government ordered 1,700 examples of the militarised ANÍBAL, in both Station Wagon and three-door Truck Cab versions, mostly for the Spanish Army. However, the economic downturn towards the end of the decade caused Iveco’s FIAT parent group to pull out of Santana, who by now were no longer producing Suzuki vehicles under licence, and with no future military orders expected (it had been hoped the Italian Army might re-equip with the MASSIF) the Andalucian Government, who had bought the Linares factory for a peppercorn in 1995, felt it was left with little alternative but to put the company into Liquidation at the end of 2011.

Looking closely at the SANTANA ANÍBAL MILITAR, focussing primarily on the more widely seen Station Wagon version, although it is visually very similar to Land Rover Defender 110 Station Wagon the twin lighting arrangement at the front and the slightly wider rear door (or tailgate of the Truck Cab) are easy identifiers. Other noticeable differences include the wheel arch cheeks (with sill stiffening / protection in between), the tubular front bumper, the curved roofline and associated top edge of the windscreen, the square-ended rear bumper with no bumperettes, and of course the prominent leaf springs (incidentally, these are parabolic and give a smoother ride than conventional cart springs).

Turning now to the three-door Truck Cab version, of which I spotted a small number in Norway but understandably the easier to heat Station Wagon was more numerous, although the cab has a metal roof and side panels with windows behind the front doors it is actually open at the back. Troops can be carried in the rear compartment on inward-facing bench seats, which fold up to give a wide load bed for cargo; the Spanish vehicle has individual wheel boxes rather than the full-length seat boxes found on British Defenders, and as a result wider loads can be accommodated.

Dimensionally, with the exception of the wider rear door, the ANÍBAL is almost identical to the Defender 110 but to ensure no Intellectual Property Rights were broken at least 15% of the overall design and sub-assemblies was made different, so few parts are interchangeable between the two makes. The biggest difference is the turbo-charged, inter-cooled four-cylinder, 2.8-litre Iveco 8140.43P engine as used in the Turbo Daily van and some of its military derivatives.

I was very fortunate in having the opportunity to drive one of the first PS10/ANÍBAL demonstrators to arrive in the UK around 2002 and a little later was driven in the first military prototype displayed outside Spain. Later, in 2005, I was driven around Millbrook’s off-road test track in both a production specification three-door ANÍBAL MILITAR demonstrator and a civilian spec ANÍBAL Station Wagon by one of the best female off-road demo drivers I know. Although I questioned the longevity of some of the plastic trim on the early prototype which I drove in ’02, I was impressed by its off-road performance and by 2005 the mature military version was in my opinion every bit as impressive as the Defender 110 even though it did not have modern coil springs.

In Norway, during TRIDENT JUNCTURE 18, several examples of the ANÍBAL could be seen beavering away as liaison and utility vehicles with the Spanish Contingent, mostly bearing ‘not in play’ white crosses to allow them to undertake their specialist duties uninterrupted by the battles ranging around them. This freed up the VAMTAC fleet for combat operations while still ensuring the troops using them had a sturdy military specification vehicle which they could both take off-road, unlike the leased ‘white fleet’ pick-up trucks some bean-counters foist on exercising troops to save a few pennies, and also tackle the at times quite challenging weather conditions.