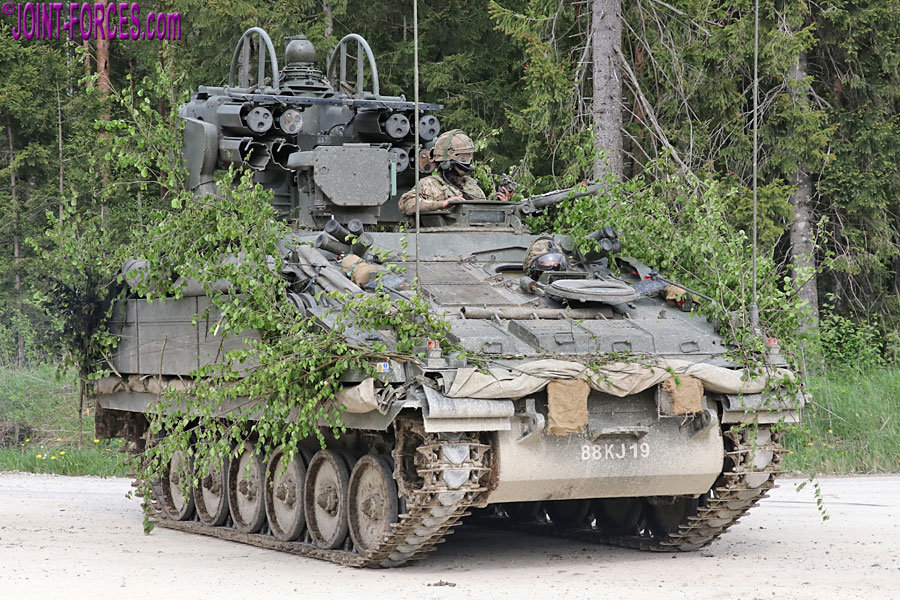 Current interest in the UK supply of Starstreak HVM systems to Ukraine has prompted us to delve into our image libraries for Stormer photos, writes Bob Morrison.

First we must emphasise that in an attempt to preserve OpSec (Operational Security) under the current evolving situation in the Ukraine and the Russian Federation’s invasion of their neighbour to the south-west, this article does not delve into great detail about the Stormer Self-Propelled Starstreak HVM air defence system and the following information block is republished directly from a widely available official British Army source.

Following the UK Government’s 2010 Strategic Defence and Security Review (SDSR 2010) and the subsequent ARMY 2020 restructuring plan, it looked very much as if much of the Stormer SP HVM fleet might soon be pensioned off with only three Regular Army batteries, plus linked Reserves, being retained. However in the light of Russia’s seizure of Crimea from Ukraine in 2014 and the subsequent SDSR 2015, which led to the ARMY 2020 Refine plan, Ground-Based Air Defence or GBAD found itself back in fashion.

In a British Army news article published in September 2021 it was stated: “The current Short-Range Air Defence System (SHORAD) used by the Royal Artillery is the high velocity missile (HVM) system optimised to defeat air threats including fast jets and helicopters in seconds. It can be fired from both mounted and dismounted launchers: a shoulder-launch for single fire, a lightweight multiple launcher capable of firing three missiles via a tripod and a self-propelled launcher that can fire up to eight missiles from a Stormer armoured vehicle.”

The Alvis Stormer is a derivative of the Combat Vehicle Reconnaissance (Tracked) or CVR(T) family, which includes the Scimitar and Spartan etc., but its aluminium armour body is around 500mm longer and wider. Other than the multiple launcher turret, not found on the Stormer Troop Reconnaissance Vehicle or TRV variant which is similar to Spartan in profile, the easiest quick recognition feature of Stormer is the additional (sixth) road wheel on each side. UK MoD gives the Stormer HVM combat weight as being 13.5 tonnes and its maximum road speed at 80km/h: unlike the rest CVR(T) family, Stormer is too heavy to be lifted by a CH-47 Chinook helicopter, but it can be shipped inside the C-130 Hercules and larger transport aircraft.

In September 2007 Carl spent several days in the field with 9 (Plassey) Battery of 12th Regiment Royal Artillery, during Exercise MEDICINE MAN 5 at BATUS (British Army Training Unit Suffield) in Canada where he was able to photograph Stormers live-firing Starstreak. This battery provided the HVM Troop of the Scots Dragoon Guards Battle Group and its mission was to provide Close Air Defence (CAD) in the forward battle area permitting the other elements of the all arms armoured battle group freedom of manoeuvre and allowing them to fight the ground battle.

Although the UK Government and MoD have formally confirmed that hundreds of Starstreak HWM missiles have been donated to Ukraine, along with at least 120 armoured vehicles, at time of writing it is uncertain precisely how many Stormer SP HVM launcher systems are included in these figures.

A very small number of Stormer High Mobility Load Carriers or HMLC, a model which the manufacturer called the Alvis Streaker, was produced for the British Army just before the 1991 Gulf War. One example mounting the French Minotaur mine-launcher system, bearing the registration 12KK35 and what appeared to be Op DESERT SABRE markings, was displayed at Eurosatory 1992 in Paris. This combination was designated Stormer VLSMS or Vehicle Launched Scatterable Mine System. A similar version with a simpler mine dispersal system, which two banks of 40 tubes at the forward end of the loadbed and two banks of 20 tubes at the back which could be rotated to the rear to cover a 180° arc, later entered service as the Shielder VLSMS.