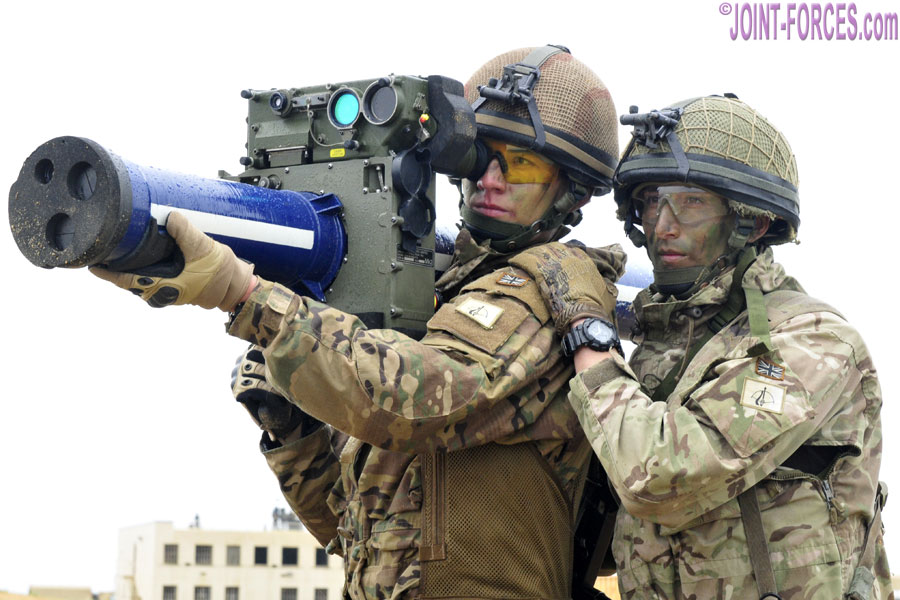 Recent interest in the UK supply of the Starstreak High Velocity Missile to Ukraine has prompted us to rework a feature first penned in 2015 by Carl Schulze.

In April 2015, during the Combined Joint Operational Access Exercise (CJOAX) 15-01 which took place at and around Fort Bragg in the United States, Carl photographed Strike Troop from 12th (Minden) Air Assault Battery of 12 Regiment Royal Artillery which at that time was the only dismounted Close Air Defence (CAD) element of the Regular component of the British Army. This sub-unit was equipped with the light role variant of the Starstreak High Velocity Missile.

At time of writing the primary mission of 12 (Minden) Air Assault Battery of 12 Regiment RA, based at Thorney Island in Hampshire, was to provide a rapidly deployable dismounted close air defence capability for the British Army in general and 16 Air Assault Brigade in particular. The unit’s role was to minimise the effectiveness of hostile air action on friendly forces or, in a best case scenario, neutralise it completely. This mission consisted of two main tasks; Vital Point Defence and Zone Defence.

When employed for Vital Point Defence the unit usually deployed its Fire Units around an objective, providing 360° protection. The Fire Units could also be employed with an assault force to provide air defence for it from enemy close air support while an attack went in. The dismounted close air defence role was adopted by 12 (Minden) battery and its troops in 2010, when 12 Regiment Royal Artillery became the sole close air defence regiment in the Regular component of the British Army. Under this process (part of Options For Change) the soldiers of Strike Troop, and the other Troops of the Battery, handed in their Starstreak Self-Propelled High Velocity Missile (SP HVM) systems, based on the Stormer tracked vehicle chassis (which we intend looking at in a follow-on article) and adopted the light role variant of the missile system.

Dismounted Airborne CAD Fire Group: In order to execute their mission on CJOAX-15, Strike Troop and the other Troops of the battery formed a Dismounted Airborne Close Air Defence Fire Group and deployed in support of 16 Air Assault Brigade. This type of Fire Group usually consisted of an Air Defence Liaison Officer, a Fire Control Cell, a Fire Group Commander and six Fire Units with three gunners each. Each Fire Unit was equipped with a Starstreak High Velocity Missile (HVM) system in the light role configuration; this could be used either shoulder-launched singly or with the Lightweight Multiple Launcher (LML). When used with the LML the very short-range air defence (VSHORAD) surface-to-air missile was operated in conjunction with the Air Defence Alerting Device (ADAD), which is a passive, clear weather IR scanner.

The Dismounted Airborne CAD Fire Group, with all its equipment, could parachute into an operational area, be brought in by transport helicopters or aircraft, or be deployed with light vehicles. When operating dismounted, the Fire Unit only had limited mobility due to the weight of the kit that had to be manhandled and therefore the number of missiles carried within the unit was limited.

Starstreak HVM: The Starstreak HVM was mainly designed to counter an attack helicopter threat but it can also be used against low flying fast jets and Unmanned Aircraft Systems (UAS). It is extremely effective against pop-up targets. However, fast jets can only be engaged within a narrow engagement profile and UAS might operate beyond the effective ceiling of the missile.

Employing Semi-Automatic Line of Sight Beam Riding (LOSBR) guidance technology, Starstreak is therefore difficult to detect or counter-measure, and the system aims to defeat fast jets and helicopters before they release their weapons. After being launched, the missile accelerates to Mach 3.28 in 0.7 seconds. This very fast missile speed increases the chances of defeating a pop-up helicopter before it acquires and guides its own missile to target.

The missile is propelled by a two-stage solid propellant rocket motor. The warhead of the 1,395mm long missile contains three tungsten dart-like projectiles that will cause multiple hits on the target and the missile itself comes in a sealed tube inside a two-part storage and transportation container. When operated in the shoulder-launched configuration, the aiming unit is clipped onto the missile outer tube. In shoulder-launched configuration the Starstreak HVM weighs 28kg. The aiming unit includes an optical head consisting of a stabilisation system, an aiming mark injector and a monocular sight. The target is acquired and optically tracked using the monocular sight and aiming mark.

The preferred set-up of the Starstreak in the light role is to use it with the Lightweight Multiple Launcher (LML), which allows the missile to be fired with greater accuracy and to engage up to three targets in quick succession. The LML incorporates the aiming unit and features an Identification Friend or Foe (IFF) capability. In LML configuration Starstreak HVM is used together with the Air Defence Alerting Device (ADAD), which is a passive, clear weather, IR scanner that aids the Fire Unit in the detection of air targets.

UK/US Cooperation: While nationally forming part of Joint Ground Based Air Defence (Jt GBAD), a multi-service organisation including air defence assets of the Royal Air Force, Royal Navy, Royal Marines and British Army with the task of providing coherent and effective ground based air defence, elements of 12 (Minden) Battery, such as Strike Troop, could also be employed in an international and combined environment. During CJOAX 15-01 Strike Troop, for example, joined forces with E Battery of the 3rd Battalion from 4th Air Defence Artillery Regiment of the 108th Air Defence Artillery Brigade; the only airborne air defence battery within the US Army.

At the time of the joint exercise the US unit was equipped with the AN/MPQ-64 Sentinel 3-D air defence radar and the FIM-92 Stinger shoulder-launched surface to air missile. Providing close air defence for an airfield captured during a joint forcible entry operation, Strike Troop and the US battery complemented each other perfectly with the infra-red homing technology of the FIM-92 Stinger being perfectly suited to counter fast-air threats while Starstreak HVM was superior in engaging pop-up helicopter targets.

Starstreak Replacement: Starstreak is being replaced in UK service by the Lightweight Multirole Missile or LMM, known as Martlet in naval service, which is produced by Thales Air Defence (formerly Shorts Missile Systems) of Belfast. This air defence new missile, which is also carried by helicopters and naval vessels, is a derivative of Starstreak HVM developed by Shorts who also produced the predecessor Blowpipe and Javelin Man-Portable Air Defence Systems or MANPADS.