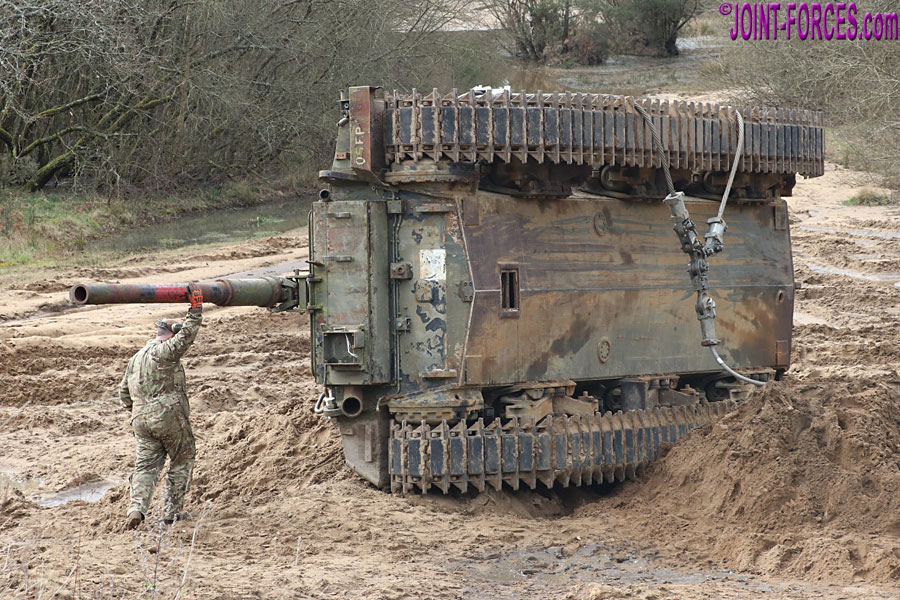 One of the tasks set for REME Recovery Mechanics on the recent IRON CHALLENGE TTX was to right an overturned tank with a CRARRV, writes Bob Morrison.

It is not often that one sees a British Army 64 tonne Challenger 2 main battle tank, or for that matter a 56 tonne Chieftain training hulk, on its side but if one were to overturn on exercise or on operations it would be REME Recovery Mechanics who would be tasked with gently turning it back onto its tracks.

The REME Light Aid Detachment assigned to every Challenger 2 squadron, at full strength comprising 18 main battle tanks, has a Challenger Armoured Repair and Recovery Vehicle (CRARRV, sometimes written as CrARRV) assigned as its primary tool; the LAD also usually has a Warrior Mechanised Combat Repair Vehicle and a brace of FV430-series APCs at its disposal. With a 50 tonne onboard winch, a secondary winch and a 6.5 tonne Atlas hydraulic crane, the CRARRV is well able to both recover a Challenger 2 tank and replace its power pack in the field. However if the casualty tank has to be lifted as a dead weight rather than be dragged or to be pulled back onto its wheels if on its side or turret roof, recovery mechanics have to resort to basic engineering technique and use pulleys to effectively double the winch capacity to 98 tonnes. This is what is happening in the accompanying photos of a training hulk Chieftain being righted.

In 1985, two years after the original Challenger (i.e. Challenger 1) main battle tank entered service the UK MoD ordered a derivative Armoured Recovery Vehicle from the tank’s manufacturer Vickers Defence and in time expanded the fleet from an initial 30 to over 70 examples to support Challenger 2 and the heaviest of the British Army’s armoured engineer vehicle family. Powered by a 1200hp Perkins-Condor (originally Rolls-Royce Condor) CV12 diesel engine through a David Brown TN54 transmission, the CRARRV has a maximum speed of around 59mph or 95km/h and a range of around 300 miles or 500km. Basic dimensions are approximately 9600x3625x3125mm and combat weight is just under 62 tonnes.

Crewed by three REME technicians, usually including at least one Recovery Mechanic and one Vehicle Mechanic, the CRARRV also has spare seating for two to allow occupants of recovered disabled vehicles to travel under armour. A remotely operated 7.62mm machine gun can be fitted for self-protection and an appliqué armour package can be fitted to increase protection levels.