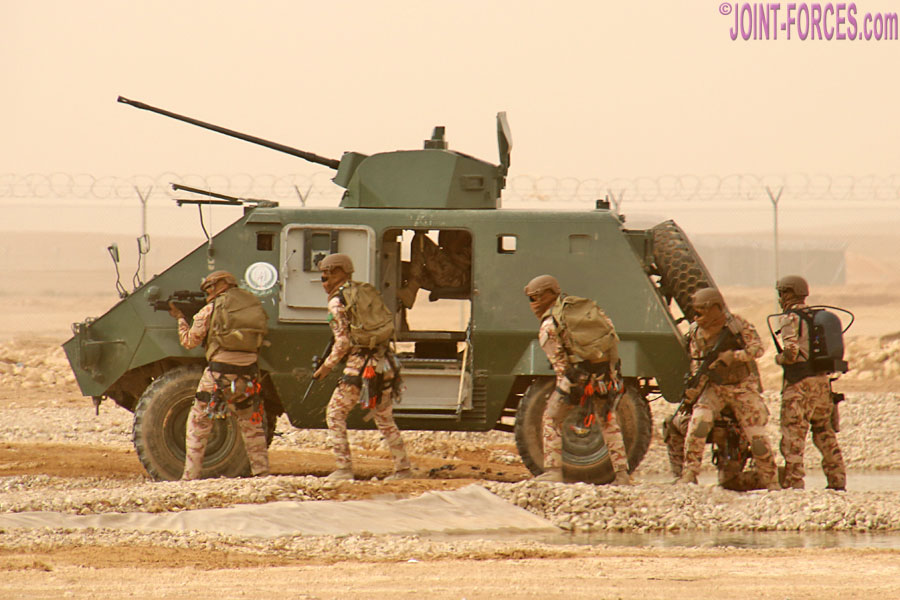 Saudi Special Security Force (SSF) Thyssen Henschel UR-416, photographed in a sandstorm during the rehearsal for a WDS 2022 dynamic display [© Bob Morrison]

The Thyssen Henschel UR-416 is the third of a trio 4×4 armoured personnel carriers used by the Saudi Arabian SSF or Special Security Force, writes Bob Morrison.

My knowledge of the UR-416, prior to encountering examples of the vehicle in use with the Saudi Special Security Force this March, could pretty much have been written on a pinhead so I turned to my colleague Carl Schulze for help.

In a nutshell, Carl said: “The vehicle was designed in the mid-1960s by Rheinstahl with company funds and based on the Unimog 416 chassis. It was offered as a replacement for the [Mowag] Sonderwagen 1 and Sonderwagen 2 armoured cars which at that time were in service with the West German Bundesgrenzschutz (Federal Border Guard) but it was not procured by them. However some West German district police forces separately procured single vehicles in the late 1960s.”

In 1973 the company Rheinstahl AG, a contraction of the then already 100-year old Rheinische Stahlwerke AG or Rhineland Steelworks PLC, was bought by Thyssen which later became part of Henschel (since 1999 a part of Rheinmetall) and as a result the vehicle they designed in the 1960s became known as the Thyssen Rheinstahl UR-416, though it is now more usually referred to as the Thyssen Henschel UR-416. Height of production seems to have been from the early 1970s until the late 1980s, when the Daimler / Mercedes-Benz Unimog 416 and associated models were phased out in favour of the newer and larger 436/437-series models. By this stage Thyssen Henschel had already been producing the TM-170, known as Sonderwagen 4 by the BGS, for several years and this newer and slightly larger Unimog-based 4×4 APC took over from the UR-416.

In addition to Saudi Arabia, at least fifteen other countries procured the UR-416 and, despite their age, possibly as many as ten of these nations still either use them or hold them in reserve stocks; mostly their use is, or was, by border guard, gendarmerie or specialist police units. Although very basic in design, as this chunky APC is essentially just a 6.4mm (0.25”) armoured steel all-welded angular box dropped onto an ultra-reliable Unimog 416 mule (i.e. rolling chassis with power train) it is still a credible Internal Security Vehicle with good off-road and rough track performance. It is also remarkably easy to maintain in the field and mechanical spare parts are relatively easy to source around the globe; indeed the body, which unlike most more modern vehicles is not heavily mine-protected, can be quite easily jacked or craned clear of the chassis to allow ease of maintenance.

Powered by a six-cylinder 5.7 litre Daimler-Benz OM 352 series diesel engine and with a combat weight of less than 8 tonnes, the 5100x2250x2250mm (to top of hull) UR-416 has a top road speed around 80km/h or 50mph and a road range of around 600km at cruising speed. Coil sprung portal axles give a very credible 440mm of ground clearance and it is possible for the vehicle to ford 1,300mm of still water without preparation. In addition to a crew of two, up to eight troops or police officers can be transported with their basic personal equipment.

It is believed that in excess of 1,000 examples of the UR-416 were eventually produced, mostly with a simple 7.62mm or 12.7mm machine gun mount in front of a central circular roof hatch. However the original vehicle designed for the Bundesgrenzschutz requirement had a large, domed, one-man cupola with 15 vision blocks for all-round visibility and a 7.62mm machine gun for self-defence; it also had a lifting dozer blade with small wheels which could be used for barricade clearance. The Saudi SSF use this version in small numbers along with a more numerous Fire Support variant armed with a more angular turret sporting a 20mm cannon which I suspect to be the Rheinmetall Mk 20 RH-202. Some sources state that the Saudis also have Command and Ambulance versions of the UR-416, but I did not spot any of these at World Defence Show 2022 (which was my first visit to the Kingdom since 1991, when my primary focus was on British vehicles deployed on Operation GRANBY / DESERT SABRE rather than on Saudi equipment).

Footnote: There was actually a fourth armoured 4×4 APC in use with the SSF at WDS 2022, the Jankel Stirling, which I also managed to grab a couple of shots of. It is my intention to delve into my archives to find photos of this rare vehicle in service with another Arab SpecOps force to produce a follow-on feature.

For other Saudi SSF vehicles see:-