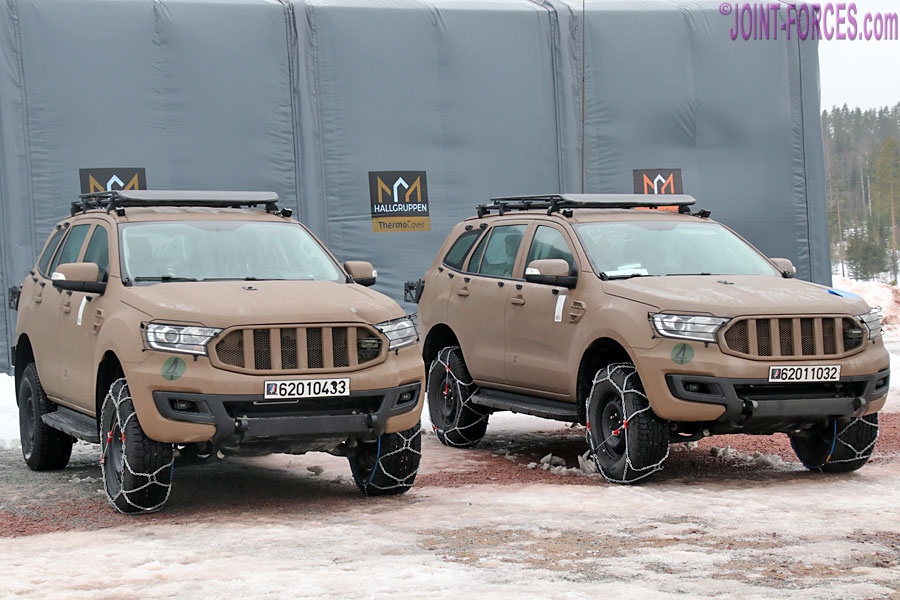 The Arquus VT4, known as the TRAPPER by the French converter, became the standard light utility vehicle of the French armed forces in 2018, writes Bob Morrison.

On the recent Exercise BRILLIANT JUMP 2022 in Norway, a deployment exercise for the currently French-led NATO Very High Readiness Joint Task Force or VJTF, I was able to snap examples of this newish militarised 4×4 SUV (Sports Utility Vehicle) which was being used primarily in command and liaison roles.

Based on the Ford Everest, which is the five-door body version of the Ford Ranger T6 model two-door pick-up truck, the VT4 TRAPPER has seating for four/five forward-facing troops and can also transport a small payload behind the second row of seats; the cargo area, which can be increased in size if the rear seating is folded forwards, is accessed through the top-hinged fifth door to allow almost one tonne of payload to be carried. There is provision for separate swing-away jerrycan holder and spare wheel carrier, though those vehicles I spotted in Norway in April were not fitted with the latter and carried their spare underneath behind the rear axle.

The VT4 is wired for military communications (2x PR4G radios), with elaborate antennae mounts around and above the rear light clusters, and it has infrared LED lighting front and rear. Internally there is a provision for a monitor for a SITEL information system with DAGR satellite positioning to be mounted in front of the commander and there are rifle bags on all four front doors. Although early examples were painted in the old three-colour French Central Europe camouflage pattern of brown, black and green, all production versions I have seen have been finished in a lighter shade of brown which is not too far off the Coyote Tan colour used for some load carriage equipment and boots etc. A black roof rack is fitted as standard and there are clips around the glazing to allow mesh protection panels to be fitted if the (softskin) vehicle is used for internal security duties such as Plan VIGIPIRATE.

A Ford Duratorq 2198cc Euro 3 diesel engine developing 160hp gives a claimed top road speed of 142km/h or 89mph, through a six-speed gearbox, and range is said to be 900km or around 560 miles. Wheelbase is 2850mm, unprepared fording of 500mm is theoretically possible, a 50% slope can be tackled, side slope capability is 30% and a 250mm vertical step can be tackled. Tyres are Finnish Nokian ROTIIVA Plus on pierced steel wheels and snow chains were fitted in Norway to comply with road traffic regulations for winter.