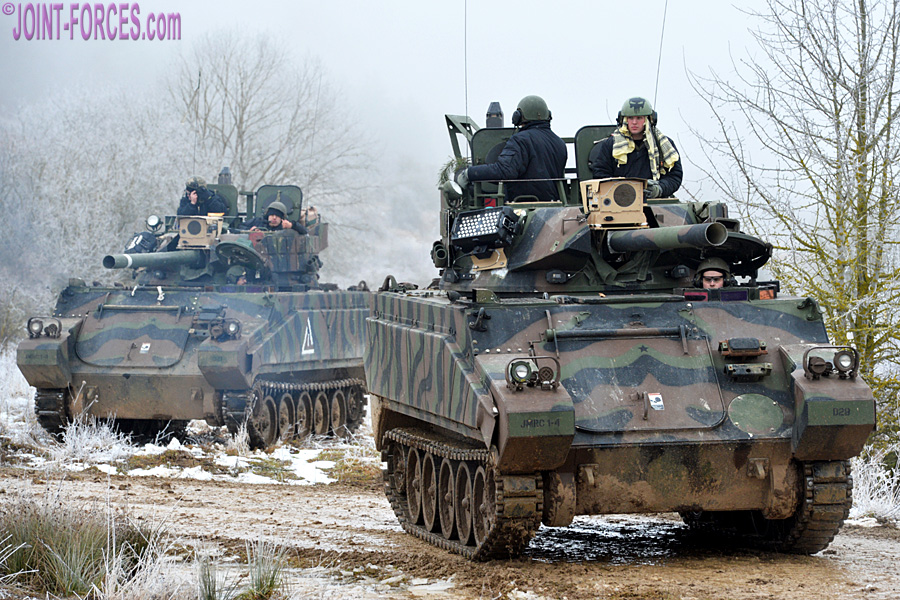 A-Days to R-Days ~ the Phases of the Exercise: ALLIED SPIRIT 22 was divided in four main phases, starting with the A-Days (Arrival Days, 15-18 January) during which the participating forces deployed to the Hohenfels Training Area and Operational Orders (OPORD) as well as Fragmentary Orders (FRAGO) for the upcoming tactical phase were given. As part of this phase various Combat Enhancement Training (CET) and Force Integration Training (FIT) activities were also conducted.

Next followed the D-Days (19-21 January) that saw the forces taking to the field on the Hohenfels Training Area in Bavaria, including their deployment to assembly areas and battle positions. During the D-Days the headquarters at all levels also went through the Military Decision Making Process (MDMP).

The actual force-on-force tactical training phase took place during the X-Days (22-31 January). In this period the multinational brigade-size force, led by the HQ of the Latvian Sauszemes Spēku Mehanizētā Kājnieku Brigāde, a mechanised infantry brigade, had to initially fight a delaying action, then a defensive battle, and finally on the last day launch a counter-attack. The enemy during this phase was provided by the 1st Battalion, 4th US Infantry Regiment, the Joint Multinational Readiness Center’s in-house opposing force (OPFOR) – the Men In Black.

Finally the R-Days (Reverse RSOI / AARS) saw the participating force going through the Reverse Reception, Staging, Onward Movement and Integration (RSOI) process while beginning their deployment back home. This phase also included After Action Reviews at all levels, conducted by the Observer Controller / Trainer (OC/T) Teams of the JMRC.

As already mentioned in our intro, the HQ of the German 1. Panzer Division served as high command during the exercise. Based in Oldenburg, this division is one of only two armoured divisions of the German Army; it’s commander is Brigadier General Heico Hübner. For the headquarters of the division the exercise was an important step on its way to achieving its national combat readiness certification in 2023, from when it again will be fully available as headquarters of a multinational force for high intensity war fighting operations as part of NATO’s collective defence.

During the exercise at Hohenfels the HQ was in charge of three combat brigades and an Aviation Task Force. Two of these brigades participated in Exercise ALLIED SPIRIT 22 only in the form of a Computer Assisted Exercise (CAX) type of training; namely these were the 43 Gemechaniseerde Brigade (a mechanised brigade) of the Netherlands Koninklijke Landmacht, which is an integrated part of the German 1. Panzer Division, and the 132a Brigata Corazzata ‘Ariete’ (an armoured brigade) of the Esercito Italiano. Attached under command of the Italian brigade was the UK’s 1st Battalion, The Yorkshire Regiment, which only participated with its HQ team.

The third brigade was the Sauszemes Spēku Mehanizētā Kājnieku Brigāde (a mechanised infantry brigade) from Latvia. This brigade is the only major combat asset of the Latvian Land Forces and its home base is Ādaži, situated to the north-east of Riga. During the exercise the brigade was in charge of combat forces not just from Latvia but also from several other nations.

While the Latvian troops taking part in the exercise almost all originated from the Sauszemes Spēku Mehanizētā Kājnieku Brigāde, the German personnel participating in the exercise mostly belonged to organic units of the 1. Panzer Division. Most of the participating US troops are deployed to Europe under the current Operation ATLANTIC RESOLVE rotation and originated from the 1st Cavalry Division ‘First Team’ and 1st Infantry Division ‘The Big Red One’.

We plan to briefly look at the Aviation Task Force in a future feature.