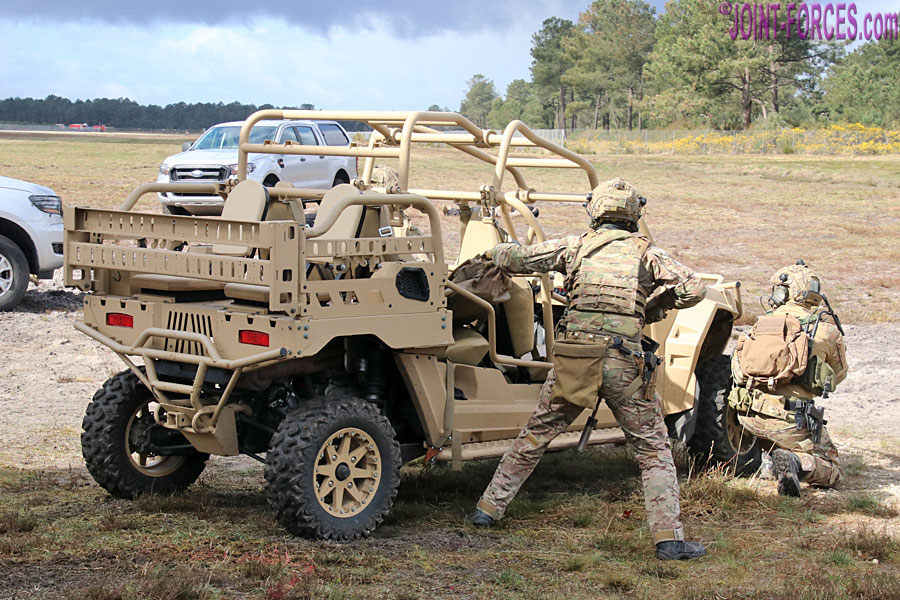 In this fourth, and for now final, part of our Polaris MRZR LTATV (Light Tactical All-Terrain Vehicle) series we present an album of recent images, writes Bob Morrison.

While the Polaris MRZR LTATV is mostly associated with US Airborne Forces, particularly the 82nd Airborne Division, and more lately with the US Marine Corps, it has also been procured in smaller quantities for Special Forces and Special Operations Forces use. Photographing SF and SOF using these vehicle, however, is not particularly easy and confirming numbers bought is difficult as not only do the users often tend to buy them outside of the mainstream defence procurement system but they also insist on confidentiality from the manufacturer or supplier. For example, photos exist of MRZR being used by both Argentina and Portugal but official details are scant.

At the 2019 edition of SOFINS, the French Special Forces expo held at Camp de Souge, I was able to photograph an MRZR in use during a dynamic display but I was unable to confirm whether or not this particular vehicle was in service or merely under evaluation. I suspect it was the latter, but when I asked the manufacturer to clarify I was met with the usual response: “Sorry, we can neither confirm nor deny”. Fair enough, I suspected nothing less.

At SOFINS 2019 the MRZR I photographed was running in tandem with one of the then new Jankel Fox LRPV (Long Range Patrol Vehicle) fleet, licence-built by Masstech, procured as an Urgent Operational Requirement or UOR for French Army Special Forces deployed in Africa. When one sees MRZR alongside the conventionally dimensioned Toyota-based Fox it is immediately apparent just how compact the Polaris LTATV actually is.

US Army Special Forces, on the other hand, are usually very forthcoming about the vehicles and equipment at their disposal as Uncle Sam works on the ‘show them the guard dog’ principle. If you want to deter thieves and burglars you can either put a notice on the gate warning everyone to ‘beware of the dog’ in the hope you are believed ~ this is the UK method ~ or you can just let the snarling beasts patrol the garden to persuade the bad guys that it really would not be worth it to try to break into your garden shed. The above photos are of one of a US Army Special Forces, aka Green Berets, MRZR LTATV pair deployed alongside Polish and Croatian Special Forces during ANAKONDA 16 in Poland immediately after a dynamic display on Ziemsko Airfield near Drawsko Pomorskie.

A few days before photographing the US Green Beret LTATV at Ziemsko I had the chance to photograph a multinational parachute drop further south in Poland, near the city of Torun on the Vistula, where US and UK Paratroopers joined their Polish colleagues after flying across the Atlantic non-stop from North Carolina. A large number of vehicles, including several LTATVs, were parachuted in as part of the Heavy Drop phase but under peacetime safety rules these were dropped ahead of the personnel and further down the DZ from our vantage point so I was unable to get in close before the troops de-rigged them and drove them off towards their objective. I was, however, able to use a zoom lens to snap some of them being extracted from the C-17 Globemasters and landing further down the DZ before the Paras made their drop on the next circuit.

US Airborne and Army Special Forces might be the primary users of the LTATV, but other specialist US Army units also have some for experimental purposes. When I visited the Yakima Training Area in Washington State for the US Army’s JWA 19 (Joint Warfighting Assessment 2019) I had the chance to photograph an LTATV-4 which had been converted for remote operation. Army Engineers were exploring the possibilities of breaching a minefield using only remotely controlled vehicles, with the operators protected under armour some distance from the action, and the MRZR was used to lay down a smokescreen to prevent the opposition seeing what was going on. The experiment worked well and ensured that no combat engineers were needlessly deployed forward into the ‘killing zone’.

My next chance to photograph the LTATV in field would come in May this year, when US and UK Paratroopers participated in a Joint Forcible Entry exercise, SWIFT RESPONSE 2021, in Estonia. Once again the US Air Force flew an 82nd Airborne formation ‘across The Pond’ into Europe, but numbers of personnel and vehicles dropped were significantly reduced on account of COVID-19 restrictions in place at the time. I was, however, able to snap the above LTATV on the DZ (Drop Zone) at daybreak following the night drop; note the packing on the loadbed to protect the load during landing and the still taped rear lights etc.

In late 2016 the US Marines also procured a batch of 144 Polaris MRZRs, which they have designated the Utility Task Vehicle or UTV. However at the Marines only use diesel and JP-8 (Jet Propellant 8) kerosene fuels, they requested that these vehicle be diesel-powered and the MRZR-D4 was the result. This vehicle is compact enough to fit inside an AAVP7A1 Amphibious Assault Vehicle meaning small numbers can be brought ashore with the initial wave of Marines, though from the accompanying photographs it is clearly a tight squeeze.

The US Marines also use the MV-22 Osprey tiltrotor aircraft to project troops further inland from their assault ships, and incredibly the UTV / MRZR-D4 can also be be brought ashore inside this unusual aircraft even though its rear ramp is bot low and narrow. By unlocking and folding the rollcage fully forward, a job which can be undertaken in minutes without the need to resort to specialist tools, there is more than enough height clearance to reverse it into an Osprey. The UTV can also be driven inside the larger CH-53E Super Stallion without prior preparation.

The US Air Force, which also uses a small number of LTATVs, has both transported them inside the C-130 Hercules and underslung them from a UH-160 Black Hawk helicopter. The Black Hawk photos show the first Air Mobility Command sling load training exercise of an MRZR at Little Rock Air Force Base in October 2020 and the third image above shows UK-based Special Tactics Operators assigned to the 352d SOW loading an MRZR onto a Swedish C-130H for a mission with Swedish Special Forces during BALTIC UNITY in November 2020.

Britain’s Royal Marines are now also using the LTATV, but few details have been announced at time of writing and the manufacturer’s representatives have told us they are contractually prevented from discussing numbers or specifications. However I am pretty sure that they have opted for the MRZR-D4. Another UK formation ~ everything points to it being Special Forces ~ has been using the petrol-engined MRZR-4 for a number of years, but as the MoD prefers to put a sign on the gate as a deterrent rather than ‘showing the beast’ I have not been able to photograph it. There is a suggestion that the new UK Ranger Regiments, officially stood up on 1s t December 2021, are being equipped with MRZR-D4 but at time of writing the only official photos circulated appear to be of a demonstrator rolled out for a VIP visit earlier this year rather an in-service vehicle.

The Polaris MRZR continues to evolve to meet new requirements and in September 2021 the larger MRZR Alpha débuted at DSEI in London Docklands.

This concludes our MRZR mini-series, but I have little doubt that this interesting vehicle family will pop up again on our pages.