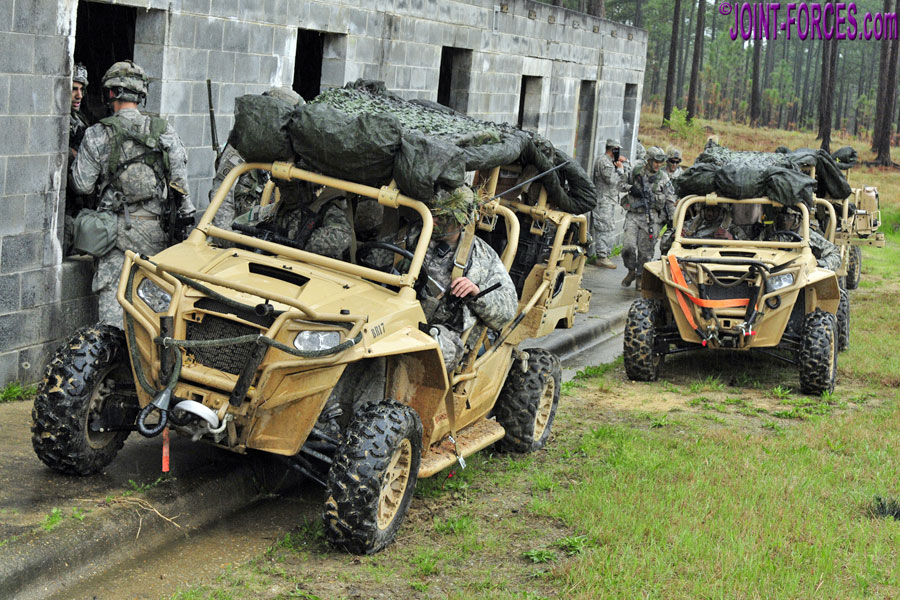 The LTATV is manufactured by Polaris Inc. in the USA, a renowned manufacturer for ultra-light and light all-terrain vehicles, including quads [© Carl Schulze]

In April 2015 during the CJOAX 15-01 held at Fort Bragg in North Carolina I was able to take a close look at the Polaris MRZR LTATV, writes Carl Schulze.

Airborne Forces are highly mobile and can be deployed worldwide at short notice as a means of crisis response. Their high mobility literally ends, however, after they have been deployed onto the ground by parachute or by helicopter. In order to allow them to execute missions further away from drop zones, landing zones and airfields they therefore require light, air-transportable and parachute-droppable vehicles.

The US 82nd Airborne Division, nicknamed the ‘All American’ Division during WWII as soldiers from every US State served in its ranks, spearheads the Global Response Force (GRF) of the US Armed Forces and as such, among other tasks, it has to conduct Forcible Entry Operations during the early stage of a Crisis Response Operation. In the first step of such an operation the US paratroopers would have to seize an airfield and secure it in order to allow the deployment of follow-on forces. In early 2015 the 82nd Airborne evaluated the MRZR-4 Light Tactical All-Terrain Vehicle (LTATV) as a means of providing its rifle companies with an air-droppable manoeuvre and light fire support platform. That April, during CJOAX (Combined Joint Operational Access Exercise) 15-01 at Fort Bragg, the LTATV was deployed in the field.

Seizing an airfield can be achieved by a combat jump or heliborne assault aimed directly onto the objective, but this is not always possible; for example when a strong presence of enemy air defence assets does not allow transport aircraft and helicopters to operate in the close vicinity of the objective. In this case the airborne forces would deploy at a safe distance from the objective and then move towards it over land at the highest possible speed to seize it. It is for this task that the 82nd Airborne Division requires an ultra-lightweight, air-portable, air-droppable, agile and fast off-road vehicle that can transport assault troops with their personal equipment and weaponry. More recently we covered such an exercise, SWIFT RESPONSE 2021, in Estonia with a combined force of US and UK Paras inserting into Estonia following a transatlantic flight from North Carolina.

Back in 2015 the 82nd Airborne had a requirement for some 300 of the LTATV. For proof of principle and capability assessment trials, as well as for doctrine development purposes, the Division was issued with some 33 MRZR-4 vehicles, manufactured by Polaris Industries Incorporated, in early 2014. The MRZR-4 LTATV and its smaller and even lighter brother, the MRZR-2 two-seater, had already seen service with units of the United States Special Operations Command (US SOCOM) for some time and had been operationally deployed in Afghanistan; see Part 1 for a photo. In 2015 US SOCOM also ordered another 2,000 of these vehicles ~ 1,700 MRZR-4 LTATV four-seaters and 300 MRZR-2 two-seaters ~ and we will look at a couple of the former in Part 4.

Dimensions, Weights and Transportability: An ultra-lightweight, on-demand true all-wheel drive vehicle, the MRZR-4 LTATV model fielded during CJOAX 15-1 had a kerb weight of 867kg and a payload of 680kg. In the standard configuration it featured four forward facing seats, but the vehicle could easily be reconfigured into a two-seater with a larger cargo bed or a four-seater with two forward and two rearward facing seats.

The vehicle measures just 3,594mm in length, 1,524mm in width and 1,875mm in height. When its roll-cage is collapsed the height is reduced to 1,524mm, thus several vehicles can be carried as internal loads by transport aircraft such as the C-130J Hercules and C-17 Globemaster III or transport helicopters such as the CH-47F Chinook or the CH-53E Super Stallion. Transporting the LTATV as an internal load in variants of the V-22 Osprey tilt-rotor transport aircraft is also possible. Using Heavy Drop Platforms the vehicle can also be dropped by parachute from transport aircraft. Deployment as an underslung load by utility and transport helicopters, such as the UH-60M Black Hawk utility helicopter, is also possible.

The cargo bed of the MRZR-4 LTATV is 857mm long by 1,160mm wide and it can accommodate loads of up to 227kg; the loadbed can be accessed by a hinged tailgate. By folding the rear seats forward and lowering the tailgate the vehicle can be converted into a makeshift ambulance that can carry two stretchers (litters in US parlance) and a crew of two. Up to two spare wheel holders or two jerrycan holders, or a mix of the two, can be attached to the outside of the tailgate or the 521mm high side walls of the cargo bed.

Featured, LTATV, MRZR, MRZR-4, Polaris MRZR
You may also like