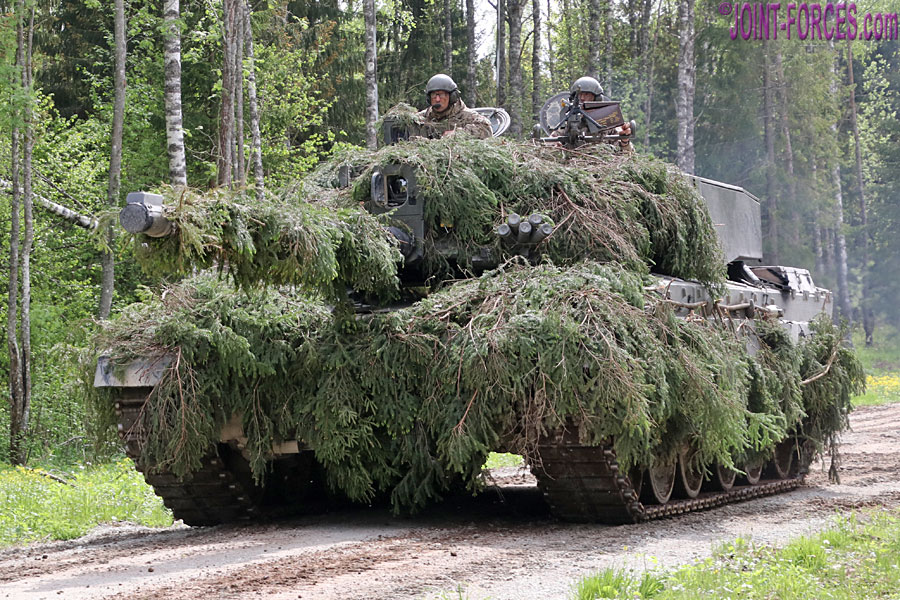 In Part Eight of Spring Storm In The Baltic Region we turn our attention to the British Army battlegroup on KEVADTORM 2021 in Estonia, reports Bob Morrison.

The British Army is lead formation for the multinational NATO eFP (enhanced Forward Presence) battlegroup based in Estonia, abbreviated to BG EST, and since the spring of 2017 it has provided a rotating contingent numbering at least 825 personnel at any one time. A secondary rotating contingent provided by either France, Denmark or Belgium, brings the battlegroup strength up to over 1100 troops at any one time.

The UK-led BG EST operates under the command of Estonia’s 1st Infantry Brigade (1.Jalaväebrigaadi) based at Tapa, about 100km by road from Tallinn, and regularly exercises alongside Estonian troops on the nearby Central Training Area at Tapa plus its immediate environs. The all-professional Scoutspataljon or Scout’s Battalion, usually referred to as the Eesti Scouts, is also based in Tapa and is the battlegroup’s regular training partner meaning a close working relationship has grown between them since NATO committed four multinational battlegroups to North-east Poland and the three neighbouring Baltic States to bolster the region in response to Russia’s annexation of Crimea and its destabilisation of Eastern Ukraine in 2014.

The British Army contingent deployed to Estonia on the eFP mission, designated Operation CABRIT by UK MoD, consists essentially of a Mechanised Infantry Battalion supported by a Challenger 2 main battle tank contingent from one of the Royal Armoured Corps regiments plus supporting combat engineer and composite artillery formations and ancillary detachments such as air defence and mechanical engineers etc. During the KEVADTORM (SPRING STORM) exercise packages in May 2021 the 1st Battalion of the Mercian Regiment was the lead formation and a company group from the French Régiment de Marche du Tchad (deployed on Operation LYNX 9) provided the secondary multinational element of the most north-easterly eFP battlegroup of the four; the UK additionally contributes a recce formation to the westernmost BG POL where they operate under US command.

As mentioned in previous parts of the story, the early 2021 COVID-19 spike across Europe restricted the scope of this year’s spring exercise phase in Estonia, reduced the numbers of participants from the neighbouring eFP battlegroups, and resulted in most activity being restricted to the Tapa training area and adjacent facilities with almost no free play out in the countryside this year. On previous KEVADTORM exercises we were able to photograph manoeuvres in much more realistic rural and urban scenarios, but this time because everything was tightly choreographed into generally quite restricted areas to primarily ensure the participating Estonian conscripts reaching the end of their training cycle derived maximum benefit, from our perspective the action was a little bit sterile in 2021. However we were able to spend a little bit of time photographing British armour working alongside the Eesti Scouts on the forward edge of battle as they provided a credible enemy force for the conscript battalions to defend against.

The primary British armoured vehicles of the eFP battlegroup are, of course, the Challenger 2 Main Battle Tank and the Warrior family of Infantry Fighting Vehicles. The FV4034 Challenger 2 was ordered a few months after the end of the 1991 Gulf War, to replace the stopgap Challenger 1 which evolved out of a cancelled export order following the Iranian Revolution. In May 2020 the UK Ministry of Defence announced that Challenger 2 will be replaced by an upgraded version, designated Challenger 3, with an expected initial operating capability date of 2027 but only 148 will be procured and the current three Regular armoured regiments are being reduced to two.

The FV510 Warrior Infantry Section Vehicle is the most numerous troop carrier used by the British eFP contingent, and small numbers of the FV511 Infantry Command Vehicle, FV512 Mechanised Combat Repair Vehicle, and FV513 Mechanised Recovery Vehicle (Repair) variants are also deployed to Estonia, but incredibly a number of 50+ year old FV430-series tracked personnel carriers are also fielded for supporting troops such as combat engineers. It was originally intended that the Warrior Capability Sustainment Programme (CSP) would upgrade the FV510, which entered service in the mid-1980s, to extend its service life until at least 2040 but in March 2021 after over 40% of the original £1 billion budget had been expended over a decade with little to show for it, the MoD cancelled the project.

From 2006 onwards the FV430 series of vehicles, predominantly the most numerous FV432 Armoured Personnel Carrier variant, was upgraded for service in Iraq with a new engine and appliqué armour package plus other modifications to prolong its projected life further. These vehicles are designated FV 430 Mk3 Bulldog; curiously, despite having photographed engineer, medical and mortar versions of the FV430 series in Estonia on three separate occasions in 2017, 2019 and 2021 I have yet to spot an up-armoured Bulldog.

Other tracked UK armour deployed on the eFP mission with BG EST includes: Stormer HVM (High Velocity Missile) used for SHORAD or SHOrt Range Air Defence; TROJAN AVRE or Armoured Vehicle Royal Engineers; Challenger Armoured Repair and Recovery Vehicle or CRARRV; M270B1 GMLRS or Guided Multiple Launch Rocket System; L131 AS-90 155mm self-propelled howitzer; and a small number of Combat Vehicle Reconnaissance (Tracked) or CVR(T) variants. It had originally been intended to ditch the STORMER HVM as surplus to requirements following the Options for Change defence review, but this decision was hastily reversed to provide battlegroup air defence once more, and both CVR(T) and FV430-series vehicles should have long been replaced by FRES and then AJAX variants, but the UK’s broken defence procurement system has put paid to that.

The NATO enhanced Forward Presence (eFP) mission in the Baltic States is effectively a flag-waving exercise rather than a credible defence against any repeat Russian expansionism in the region, and it is often described as being a speed bump rather than a traffic barrier. Just like the old ACE Mobile Force (AMF) of the Cold War era it is intended that any potential aggressor should ‘count the flags and not the barrels’ and therefore have second thoughts about taking on a substantial proportion of the NATO Alliance nations as enemies by attacking their representatives on the ground.

Author’s Opinion: If I were one of the British ‘speed bumps’ out in the Baltic Region, I think I would be hoping that the politicians might put a rocket under the seat-polishers in UK defence procurement (and Treasury) jobs to make them up their game and speedily provide badly overdue modern equipment to allow the lads and lasses on the ground to do the jobs asked of them in the best ways possible and at least risk to themselves. Maybe 2022 will become the Year of Change. We can but hope… but I’m not holding my breath.