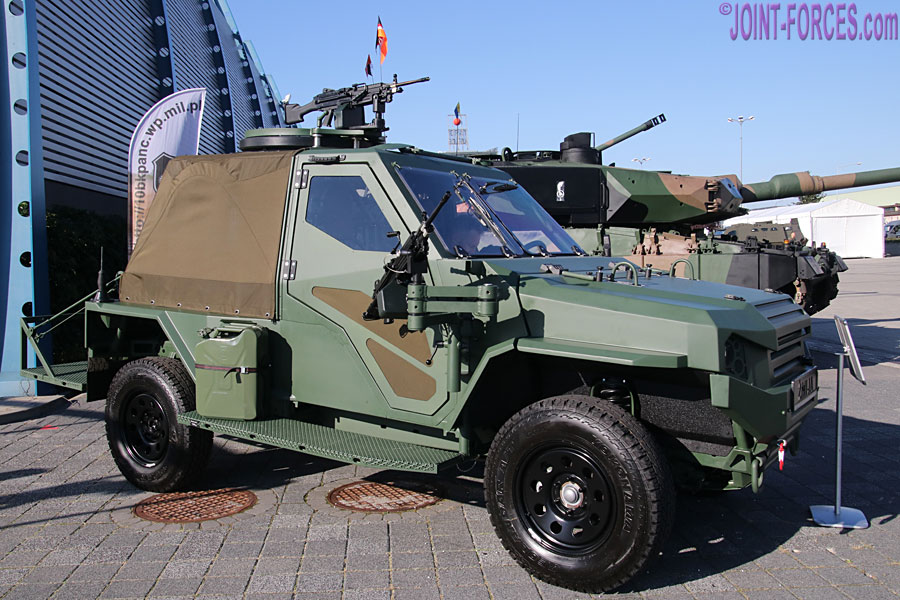 First publicly displayed at the MSPO 2017 defence expo in Kielce, the WIRUS-4 offered by the Team Concept consortium was announced as the winner out of three candidates evaluated for Poland’s Ministry of National Defence Żmija, or Viper, requirement for a three-man Light Strike Vehicle; Lekki Pojazd Uderzeniowy or LPU in Polish.

We first encountered the WIRUS-4, produced by the Team Concept consortium of vehicle conversion company Concept of Bielsko-Biała and PHO (Polskiego Holdingu Obronnego) of Warsaw, at Eurosatory 2018 in Paris, where it was displayed with two examples of the team’s DINO contenders for the Tarpan Honker replacement programme. This smaller vehicle, a company demonstrator, had solid sides to the rear body plus side-mounted spare wheel and fabric front doors but when we next photographed another example, at MSPO 2020, this version had fabric rear body sides and composite front doors as per the first production batch.

According to data displayed in English by the Polish MoND, the “VIPER Long Range Recognition Vehicle is designed to transport crew, armament and specialized equipment, both during combat operations and during peace, in difficult terrain and weather conditions, during the day and at night.” In total 118 vehicles were ordered in 2017 and the first batch of 25 is now in service with the 2nd and 9th Reconnaissance Regiments with two of their number sent to the Land Forces Training Centre.

Technical specification details published by MoND confirm that the production vehicle, which is based on the Mitsubishi L200 pick-up truck rather than the Toyota Hilux originally envisaged, is powered by a 2.4 litre (2442cc 4-cylinder 4N15) diesel engine through a 6F1R manual gearbox. Drive is 4-wheel with a central differential, reduction gears and three differential locks, suspension is independent double wishbone coil sprung all round with a rigid rear axle, and brakes are disc at the front and drum at the rear. Length is given 4,000mm, width is 2000mm, height is 2050mm and wheelbase is 2,600mm. Ground clearance is 245mm, approach angle is 40°, departure angle is 65° with rear load platform raised, or 37° with platform lowered, ramp angle is 40° and a 100% gradient can be tackled.

Officially the vehicle is described as being open body with three seats (the third seat is transverse) on a high strength tubular construction frame and body components are described as composite materials. The vehicle, which is unarmoured and has a GVW of just 2,700kg when carrying 900kg maximum payload, has a floor with spatial flexible ballistic shields limiting the effects of an explosion underneath to comply with Level 1 STANAG 4569 Annex B. As can be seen from the photos, ŻMIJA has a basic weather protection kit with removable doors and windscreen panels, and the lightweight seats are webbing rather than cushioned. As the vehicle with its three-man crew is intended to be self-sufficient in the field for up to seven days there is a lightweight rear platform for carrying rucksacks and light cargo externally. As is to be expected, this LRRV is heli-portable.

In the 7th December Press Release it was announced that the first ŻMIJA batch was being immediately deployed to the Polish-Belarusian border, where economic migrants from outside of Europe are being used by the Belarus regime to create instability in Poland and the Baltic Nations, to conduct patrols over difficult terrain. It was originally intended that remaining 93 vehicles would be in service by the end of 2022, but even though the pandemic slightly delayed fielding of the initial batch the current security situation could well see production being stepped up.