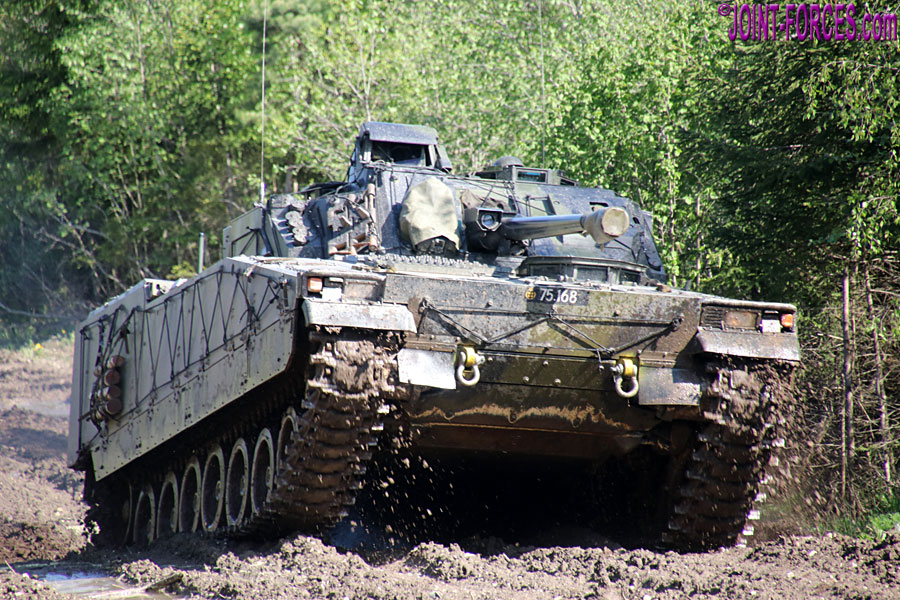 In Part Seven of Spring Storm In The Baltic Region our focus falls on Denmark’s JDR (Jutland Dragoon Regiment) on KEVADTORM in Estonia, reports Bob Morrison.

The 2021 edition of KEVADTORM or SPRING STORM, Estonia’s primary FTX (field training exercise) for evaluating both her Land Forces at the end of the conscript training cycle and the in-country NATO eFP (enhanced Forward Presence) battle group plus its Estonian elements, was severely impacted by COVID-19 travel restrictions making it difficult for troop contingents from the neighbouring eFP battlegroups in Latvia and Lithuania to participate. Additionally, even though participating troops were inoculated and operating in ‘bubbles’ to limit spread of any infection, it was decided to cancel the phase of the exercise normally conducted across public land and to restrict troop movements to the Central Training Area at Tapa and its immediate environs.

Although the multinational contingents who would usually provide credible OpFor (Opposing Forces) were unable to travel from or pass through Latvia due to quarantine regulations still in force at the start of May, COVID rates at the western end of the Baltic were low enough to allow Denmark to fly in a contingent of troops to Ämari to provide a reinforcing element for the exercise. The Danish 4th Armoured Infantry Company of the II Armoured Infantry Battalion of the Jutland Dragoon Regiment (II/JDR) was chosen for the mission and their armour was sent along the Baltic Sea by DFDS Ro-Ro ferry to both equip them in the field and help exercise the Estonian military logistics machine at the port and across half the breadth of the country (see KEVADTORM 21 ~ Danish Participating Unit Arrives).

In between photographing US and British Paratroopers in-country for SWIFT RESPONSE 2021 and Estonian and British troops deployed on the main counter-attack phase of KEVADTORM 2021 on the Central Training Area I was allowed (because I had received my second Pfizer vaccination two weeks prior to leaving the UK and had been in Estonia, regularly self-testing, for another two weeks) to work for a day with the Danish ‘4 of Diamonds’ Company. As we have previously seen (KEVADTORM 21 ~ Jutland Dragoons Counter-Attack) the Jutland Dragoons, supported the professional Scoutspataljon (Scouts Battalion) or Eesti Scouts from 1 [EST] Infantry Brigade.

The day commenced before 06:00 with the Jutland Dragoons assembling at a Forming Up Point and securing their Line of Departure before advancing and seizing a river crossing which notionally represented the Mustjõgi River, in reality a couple of hundred kilometres to the south but as previously mentioned it was not possible to conduct the exercise across the originally intended terrain so revised exercise plans were overlaid on the training area. Once across the Mustjõgi the Danes advanced through woodland, dismounting from their CV9035DK Infantry Fighting Vehicles to clear the woods, before mounting up again and attacking enemy positions in two small hamlets forming the first Objective. Once this had been successfully achieved, B Company of the Eesti Scouts, which had been operating in support, moved forward along the next axis to assault enemy troops occupying the second Objective.

The Jutland Dragoon Regiment or Jydske Dragonregiment, which is currently Denmark’s only regiment with a main battle tank component, comprises: I Armoured Battalion, with three tank squadrons; II Armoured Infantry Battalion, with two mechanised infantry companies and one armoured infantry company – i.e. 4 Company; and V Training Battalion. The primary vehicle used by 4 Coy II/JDR is the CV9035DK, 45 of which were procured from BAE Systems Hägglunds in December 2005 and its main armament is the Bushmaster III 35mm cannon. This IFV can transport a squad of seven dismounts in addition to its crew of three; the Eesti Scouts use a similar vehicle, purchased from the Netherlands as surplus to requirements and first fielded on KEVADTORM 2017.

Denmark also uses the GDELS Mowag Piranha V wheeled infantry fighting vehicle, formally ordered in December 2015 with an expected In Service Date of 2019, which by 2023 should have replaced the earlier wheeled Piranha IIIC and tracked M113 fleets. A few of the new Piranhas, presumably with the Combat Engineer detachment and one of which was fitted with a dozer blade, accompanied the 4 Company advance. On the softskin vehicle side, an M-B Geländewagen liaison vehicle and an M-B Unimog logistic truck followed the advance.

For what will probably be my final article in this series, slightly delayed by me needing to single-handedly cover a number of near back-to-back European defence expos and other assignments over the last few months as my colleague Carl has been serving his country in uniform, I plan to look at the British-led NATO eFP Battle Group in Estonia during KEVADTORM 2021.