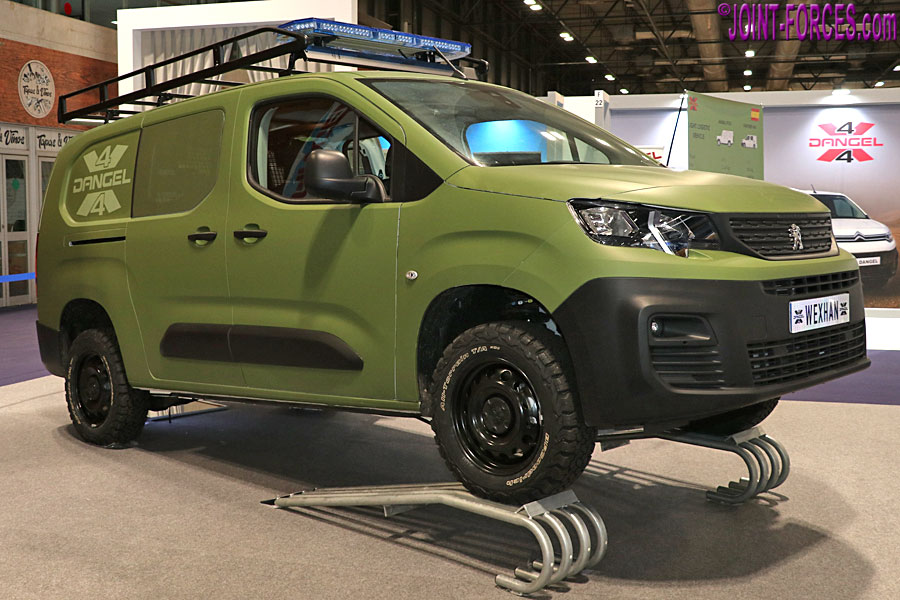 The Peugeot Partner 4×4 LLV (Light Logistic Vehicle) is being proposed by Dangel-Wexhan as a replacement for the ageing Spanish Army Santana, reports Bob Morrison.

Some purists will no doubt be shaking their heads at the thought of a ‘white van’ replacing a military utility vehicle derived from the classic Land Rover, but the idea is really not all that far-fetched if one considers how many armies have increased their ‘white fleet’ inventories as methods of warfare change in the 21st Century. [With 35 years of specialist military 4×4 scribbling and snapping under my belt, I suppose I really should pen an in-depth article on this topic, but this is not the time and place for that.]

While there is still be a need for smallish quantities of softskin ~ i.e. unarmoured ~ military specification light and medium utility trucks for liaison and training use at rear echelon level, these days it is really only special operations and very lightly equipped units who travel up at the sharp end in the combat or crisis zone without full armour protection. Around or between garrisons and out on the training areas it is now more usual to find, often leased and invariably cheaper, light commercial vehicles being used instead of dedicated jeep-type 4x4s, so using an all-wheel drive conversion of a successful light cargo van rather than an expensive full military specification off-roader in not really such a far-fetched idea.

For more than four decades the French company Automobiles Dangel (commonly called Dangel 4×4) has been successfully converting, mostly but by no means exclusively Peugeot and Citroen, two-wheel drive vehicles into four-wheel drive for use in places where roads are often unpaved. Converting vehicles for the Paris-Dakar Rally was how founder Henry Dangel established the brand’s reputation, but today his company’s 4×4 conversions are widely found on blue light services vehicles operating in rural or remote areas, especially on the European continent and in North Africa. By late next year or early 2023, Dangel intends transferring production of the V37 (Parner 4×4) conversion to Vigo to be close to the Stellantis (formerly Peugeot) factory meaning the vehicle would then be 100% Spanish.

Dangel-Wexhan, the Spanish side of the business based in Zaragoza, displayed the Peugeot Partner 4×4 vehicle I am focussing on here at the FEINDEF 2021 expo in Madrid along with promotional material providing direct specification and running cost comparisons with five dedicated 4×4 utility vehicles currently in service across a number of armed forces. They also displayed comparative specifications with the now out of production Iveco-powered Santana Anibal (Hannibal) PS10 militarised medium utility vehicle which has been in service with the Spanish Armed Forces since 2003 and also in use with some government departments; surprisingly, other than Approach Angle, the Partner 4×4 matches or betters the leaf-sprung Anibal.

Based on the five-door passenger van, or fully enclosed crew cab, version of the Peugeot Partner (a close sibling of the Citroen Berlingo and Opel / Vauxhall Combo, also produced by what is now the Stellantis group of companies) which is manufactured in Galicia in north-west Spain, the Dangel-Wexhan conversion has seating for two plus three and a 4.4m³ rear cargo compartment capable of carrying 1,000kg of payload. Powered by a 1499cc diesel engine, the Partner 4×4 has a top road speed of 184km/hr (115mph) and a range in excess of 1,000km on a 50-litre fuel tank. The vehicle’s 4×4 driveline has a viscous coupling with torsional vibration absorber, electronic traction control and a rear differential lock. Drive is selectable 4×2 or 4×4 with a selector offering ECO 2WD or AUTO 4WD modes; in ECO 2WD a jaw clutch in the front transfer case disengages the 4×4 driveline allowing fuel and tyre wear savings when 4×4 in not necessary, and in AUTO 4WD if the front axle loses traction the viscous-coupling unit automatically transfers some of the available torque to the rear axle; there is not, however, a two-range transfer box as found on many original configuration 4×4 vehicles designed for heavy and towing off-road use. The vehicle seen here has been fitted with 16″ wheels and military towing jaws.

Ground clearance of the 4×4 is raised to 205mm, matching the Santana Anibal PS10, approach angle is 26.5°, which cannot match the Santana, departure angle is 38°, which is almost the same as the Santana, and the 155° breakover angle is comparable. However on the driver and passenger comfort side, the coil suspension (not to mention the air-conditioning) is a quantum leap ahead of the rather agricultural parabolic leaf-sprung Santana suspension and on the safety side the Peugeot conversion also has both ABS and front airbags. From the driver’s perspective, the Partner 4×4 has car-like controls.

The vehicle displayed by Dangel-Wexhan at FEINDEF 2021 had not been militarised but, just like several of the current Sports Utility Vehicles adopted by some NATO nations, a degree of military conversion is possible. Full militarisation, such as suppression to allow military radio communication systems to be fitted and dual voltage, are unlikely to be a feasible cost options, but as under ‘duty of care’ grounds softskin vehicles are generally no longer considered to be a viable option for first or second echelon military formations it is unlikely a next generation Light Logistic Vehicle, or what the UK designates a Truck Utility Medium, would be expected to require such a high specification.

It will be interesting to see if NATO military procurement specifiers ‘bite the bullet’ and publish tender requirements that allow this type of vehicle to be seriously considered as a replacement for the likes of the Land Rover Defender and Geländewagen (G-wagen) fleets currently fast approaching the end of their service life; the potential cost savings alone may well sway their deliberations.