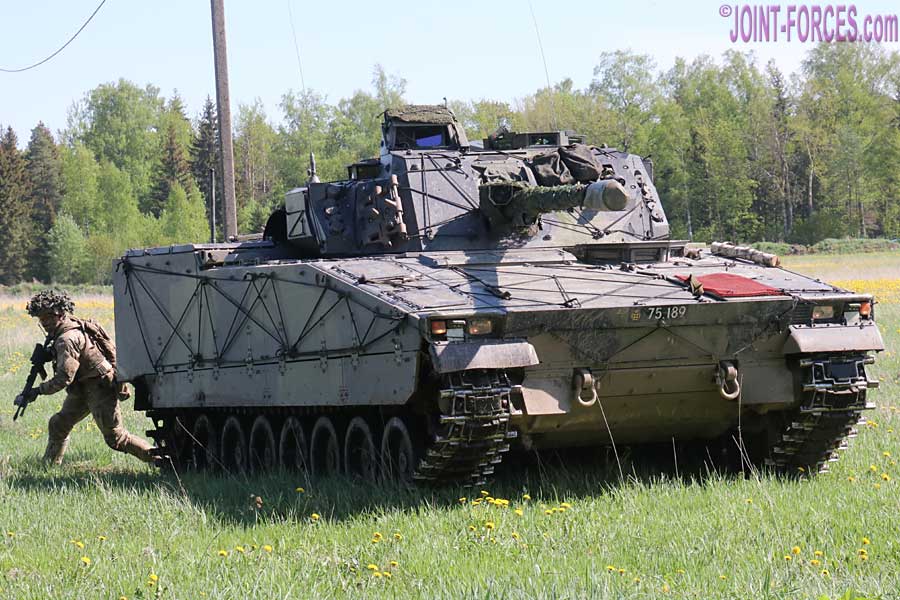 Yesterday, in woods and on farmland south of Tapa in Estonia, we joined Denmark’s Jutland Dragoons during a KEVADTORM 21 counter-attack, reports Bob Morrison.

Over the last week, mostly under pretty abysmal weather conditions, Estonian troops from 1st and 2nd Brigades, the NATO eFP Battle Group, and a visiting company group from the Jutland Dragoons Regiment have been undertaking work-up training and familiarisation prior to next week’s main KEVADTORM (SPRING STORM) 21 manoeuvres on the Central Training Area north of Tapa.

The accompanying images, which are merely a teaser for future features to be penned once I am back at JOINT-FORCES HQ enduring compulsory quarantine, should hopefully give readers a brief flavour of the action. In short, 1 [EST] Brigade Headquarters commanded the Danish company to pass through the Estonian Scoutspataljon (aka Eesti Scouts) lines, clear through woods to the front, then capture two OpFor (Opposing Forces) objectives in copses a couple of kilometres distant where anti-armour teams had been detected straddling the main line of advance. Detached squads of Eesti Scouts, using SISU Pasi 6×6 personnel carriers, acted as the OpFor troops.

After following the Dragoons’ tracked CV9035DK Infantry Fighting Vehicles down forestry tracks as their dismounts cleared the woods ahead checking for unidentified OpFor positions, we leapfrogged in front by a circuitous route and joined the Scouts at one of their defensive positions, a ruined farm barn inside a copse, to await the imminent arrival of the Danes.

Fortunately we were blessed with warm sunshine all morning, though downpours would return in the afternoon, allowing plenty of photography of not just CV90 IFVs but also of two Danish Piranha versions we have not previously covered. Afterwards, we listened in on the After Action Review as the Danish and Estonian officers and SNCOs discussed the benefits and challenges of, and the lessons learned from, this interesting and successful interoperability exercise of an Allied company group which had only arrived in theatre one week previously.