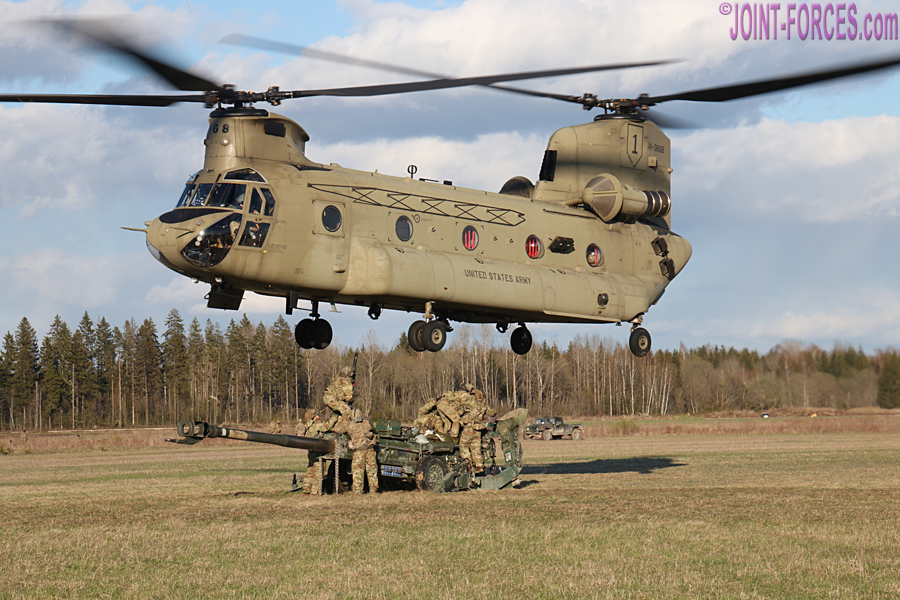 In this fifth part of Spring Storm In The Baltic Region our focus falls on the SWIFT RESPONSE artillery on the heliborne air assault phase, reports Bob Morrison.

Background for those who may not have yet read Parts 1 to 4: SWIFT RESPONSE 2021 was a US-led multinational exercise held near simultaneously across several countries, linked into the DEFENDER-Europe 2021 deployment of troops from the United States into several European countries, aimed at demonstrating the US and NATO Alliance commitment and ability to rapidly reinforce in times of crisis. SWIFT RESPONSE activities in Europe commenced in Estonia in early May, just ahead of the national KEVADTORM / SWIFT STORM field exercises, with a Transatlantic Joint Forcible Entry (JFE) phase which was immediately followed up by an Air Assault phase and then a package of live-fire exercises involving American and British airborne troops.

As is often the case with a NATO airborne insertion exercise, artillery (known as Fires in US parlance) assets were parachuted in as part of the Heavy Drop which in peacetime is usually dropped close to, but on safety grounds not on top of, the Drop Zone used to insert the Paratroopers. The airborne gunners who have parachuted in alongside the infantry companies and other supporting troops then make their way speedily to their guns, de-rig and manhandle them off the airdrop platforms they were parachuted on, then set up a gun line to provide cover and counter-battery fire as the airborne infantry fans out to clear any enemy troops in the immediate area and to secure the bridgehead behind enemy lines for follow-on operations.

Dependent on the size of the formation dropped, and the assets of the NATO nation undertaking the parachute insertion, the artillery support can vary from mortars, either 81mm or 120mm, to towed howitzers, from 105mm to 155mm, or a combination of all. Normally the Joint Forcible Entry would me made onto, or reasonably close by, an airfield capable of accepting a follow-on TALO (Tactical Air Land Operation) phase undertaken by transport aircraft carrying heavier vehicles and equipment plus resupplies of expendables to sustain the operation beyond the limited period (days rather than weeks) that Paratroopers are self-sufficient for when they drop. Self-propelled artillery and bulk ammunition would usually follow on with the TALO, but a quantity of ready ammunition to allow the artillery to operate until the designated airfield has been secured by the Paras is delivered with the Heavy Drop (see SWIFT RESPONSE 2021 ~ Drop Zone Vehicles Album for library images of a US Heavy Drop).

By the afternoon of the parachute insertion onto Nurmsi airfield in Estonia, which took place in the early hours of 8th May 2021 following a day’s safety delay as a major storm front passed through the Baltic region, the joint formation of Paratroopers – drawn from the US 82nd Airborne Division (primarily 1st Battalion of the 508th Infantry Regiment) and the UK 16th Air Assault Brigade (primarily 2nd Battalion of the Parachute Regiment) – had secured the airfield’s perimeter, expanded north-east into the forest to mop up all remnants of enemy forces in the area, and were reorganising for an evening heliborne move from Nurmsi to link up with Estonian and NATO eFP allies on and around the Central Training Area near Tapa. With this initial phase of the JFE successfully completed, the airborne gunners from Charlie Battery, 1st Battalion of 319th Field Artillery Regiment or 1-319 AFAR were now free to also move forward to Tapa by helicopter so they packed away their howitzers and moved to their designated area on the PZ (or Pickup Zone) as the DZ (or Drop Zone) was now designated; for SWIFT RESPONSE 2021 in Estonia the same location was used for both DZ and PZ, but on previous larger JFE exercises I have covered, which did not have not have to be run under COVID-19 restrictions, different DZ and PZ locations were used.

The PZ at Nurmsi was split into parallel Staging Area Light and Staging Area Heavy sectors, running with the direction of the old Cold War-era grass runway military airfield and each stretching for several hundred metres / yards. A total of seven lifts was scheduled to fly forward, with each helicopter making repeat round trips to move over 600 personnel and their equipment:-

As afternoon turned to evening and the day’s incessant drizzle turned to squally showers, I relocated to the south side of the Staging Area Heavy with the intermittent bright sunshine behind me to wait for the first lift to commence. Both CH-47 Chinook and UH-60 Black Hawk helicopters from the US Army 1st Infantry Division’s 1st Combat Aviation Brigade, deployed to Europe on the ATLANTIC RESOLVE 7 mission, were used to transport guns and personnel forward, with the first wave consisting of three Chinooks plus three Black Hawks and the second consisting of four Black Hawks. Before commencing the lifts the helicopter pilots, who had flown in from the west, set down line astern on the Staging Area Light to conduct the necessary peacetime safety briefings with representatives from the units who had crossed the Atlantic the night before to parachute onto a different continent; as always with military operations, ‘hurry up and wait’ was the mantra of the day while everyone ensured the other parties were reading from the same script.

With all briefings complete, those helicopters tasked with lifting the artillery took off and crabbed across to the Staging Area Heavy to conduct a trial lift of the howitzers. This is another peacetime precaution and one which prevents the loadmaster having to dump a potentially unsafe load (which I have witnessed myself in the past) to protect the aircraft and its occupants in the case of something unexpectedly going wrong in the air. A Hum-vee carrying a new artillery locating system, packed away in its hard cases for transit, was also lifted by a Chinook during this trial phase to give the crews experience of both rigging and air-lifting, but although its crew were flown forward in Lift 1 the vehicle itself was unhooked and left on the PZ.

Once the trial heavy lifts were completed, by three Chinooks and one Black Hawk, the pilots crabbed them off to the side and settled down to allow the personnel from LOYALTY to board the aircraft and take their seats as the rotors turned and burned. Just before the appointed hour, the three aircraft designated to lift the gun line howitzers (2x 155mm and 1x 105mm) took of and moved sideways again where handlers once again hooked the loads up and once this was speedily accomplished all six helicopters assigned to Lift 1 took to the skies and headed north towards the Tapa polygon, where a new gun line would be established to support the following live-fire attacks by the parachute infantry company from 508 PIR.

By now I had been on the go for over fifteen hours that day and had a good hour’s drive ahead of me, leaving under an hour to find somewhere still serving food in Tallinn before the 21:00 compulsory closures under COVID-19 restrictions kicked in, so with daylight dropping off I decided not to hang around for the second lift to commence. I did, however, join the guys from 508 PIR and 2 PARA a couple of days later for their live-fire action and I plan to cover that in the next Spring Storm In The Baltic Region chapter… fingers crossed!