A Visit To Arktis Endurance Textiles 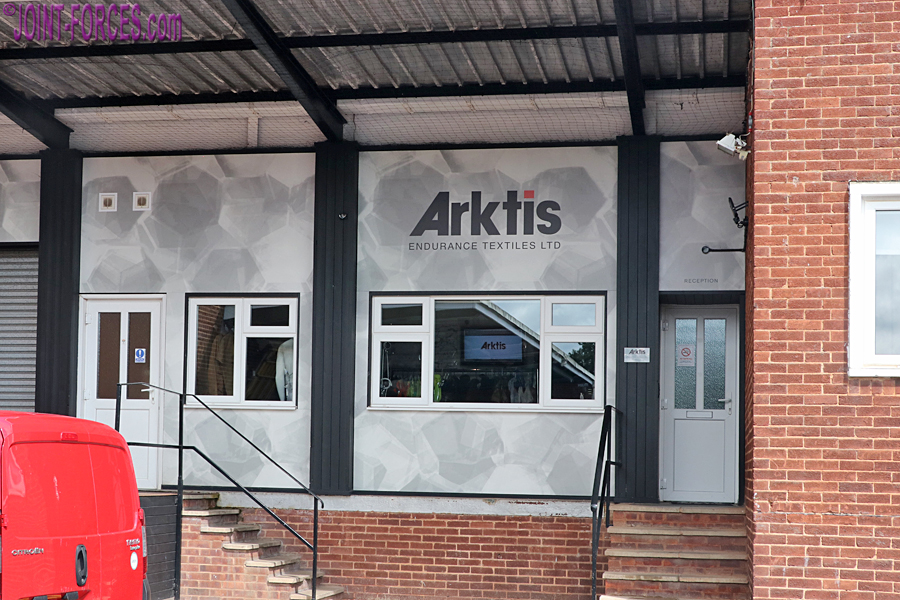 Arktis Endurance Textiles is a specialist UK manufacturer and retailer of military and police garments with a thirty plus year quality pedigree, reports Bob Morrison.

Potted History: Founded in Devon in the mid-1980s by a former Royal Marines officer, David Ross, and then bought in the mid-1990s by one of its directors, Tim Holden, since its very inception the Arktis brand name has had a reputation for excellence and endurance. In 2017, having passed retirement age, Tim sold on the Arktis brand to the directors of County Antrim based Francis Dinsmore Ltd, suppliers of specialist textiles and coatings. They formed Arktis Endurance Textiles Ltd to trade from the original Exeter factory and plans were put in place to expand the business further by taking on and converting neighbouring larger warehouse premises while keeping the original factory running. In late 2019 Ronan Corrigan took over as Operations Director to bring the new manufacturing facilities on-stream at Exeter, and six weeks later when we met him at MiliPol in Paris he invited us to visit the newly refurbished factory before the next round of defence & security expos commenced….. then COVID-19 struck!

It would be July 2021 when our paths crossed again at an expo, this time the Outdoor Trade Show in Liverpool, where Ronan told me not only that the invitation to visit the new factory still stood once we were fully out of Lockdown but also that production had continued apace throughout the pandemic to ensure contractual obligations for emergency services and military customers were met.

Fortunately, in addition to a core of in-house professional seamstresses and machinists Arktis also has a similar number of mostly local experienced out-workers who are fully set up for working from home, and the newly refurbished workshops were also easily modified to allow socially distanced work stations so, other than the only to be expected initial blip as the world faced up to the new challenges, mainstream production did not suffer. When I visited earlier this month it was the Friday afternoon before the annual holiday shut-down, when only a skeleton staff would remain at their desks to look after Arktis Webstore orders and industry customer enquiries, so Ops Director Ronan was able to take some time out to show me around as work tailed off before heading down the road to Exeter Airport to catch a flight back home for a well-deserved break; though there were still a few machinists around clearing up last-minute jobs which needed to go out to customers.

My personal history of wearing Arktis products (the name derives from the Norwegian for Arctic – a region where David Ross served a fair bit while with the Royal Marines) goes back thirty years, when shortly after Gulf War One I bought one of the company’s original chest rigs to carry my spare films, camera accessories and documents where they were easy to access. Based on the Vietnam-era Chi-Com chest rig design, but manufactured from durable 1000D Cordura, in the days before combination body armour and load carriage vests were issued these were de rigueur with 42 and 45 Commando, who each wore slightly different variations. I opted for the three magazine and two water bottle pouch version, in olive green, as it allowed me to carry 54 rolls of film (in nine six-roll boxes giving a total of 1,944 frames plus 36 in each camera) and two spare lenses on my person, where they were easily accessible. It was my good friend Yves Debay, sadly assassinated in Syria in 2013, who taught me the trick of stowing films in slide boxes for stowage inside magazine pouches and rotating them in sequence to ensure I could reload a fresh film even in total darkness.

That particular chest rig modus operandi did not last for long, however, after David and his Arktis sidekick Rod ‘Top Malo House’ Boswell offered to create a hybrid COP vest for me by mix ‘n matching the pouches from two prototype MP vests to meet my specific requirements. I was now able to carry even more film, plus lenses, spare batteries and flashguns, as well as waterproofs in an external rear poacher’s pocket, but I gradually stopped wearing that vest after digital replaced film and I could stow several memory cards in a single nylon wallet. However from time to time that 27yo vest, which served me well through various Balkans assignments and then well into the new millennium, still sees the light of day on certain jobs where I need to carry a lot of spare lenses and peripherals on my body rather than in a daysack because I will be most likely be repeatedly jumping in and out of a cramped vehicle at short notice.

Another long-lasting Arktis creation which still sees plenty of use, indeed as recently as last Saturday when the weather was a bit changeable, is my original Stowaway Shirt. This olive green lightweight jacket, first conceived by Tim Holden as an aircrew survival jacket, weighs under 140g (5oz) in its stuff sack and measures just 140mm by 65mm diameter or 5.5” by 2.5” dia. This is one of the prototype batch from 1998 and so does not have a hood, but is packs away so small that I take it everywhere on assignment with me and that additional wind- and rain-resistant layer has come in really useful many times over the last 23 years. A hooded version, the A192 Stowaway Shirt, is now produced in minirip nylon with DWR coating in various colours and camo patterns, but as it tucks away into an integral pouch rather than compressing into a stuff sack it is not quite so compact as my trusty original.

Although Arktis continually develops new products, and indeed they even have a sister company that produces high end military-themed fashion garments for the rapidly changing international scene, the one constant factor with the band is that when a product line becomes popular with emergency services and/or military customers they keep it in production for many years, though occasionally they will make minor changes to incorporate additional useful features identified / requested by end-users. The B315 Avenger Coat with Detachable Fleece is one such garment which I have owned for over two decades now and which I regularly wear on cold weather assignments. A full length coat with a 50/50 cotton polyester ripstop outer and waterproof polyester taped dropliner plus zip-in fleece layer, the Avenger has been procured by constabularies all around the UK for officers who need to operate around the clock in the worst of conditions. I sourced mine, which is the original design with removable hood and no chest pockets, for a winter assignment in 2001with the Norwegian Army in Bardufoss, well inside the Arctic Circle. All it has required is occasional re-treating it with DWR to maintain its excellent properties.

Based on my experience as a long-term wearer, I reckon there is good reason why the company’s official name is actually Arktis Endurance Textiles Ltd.