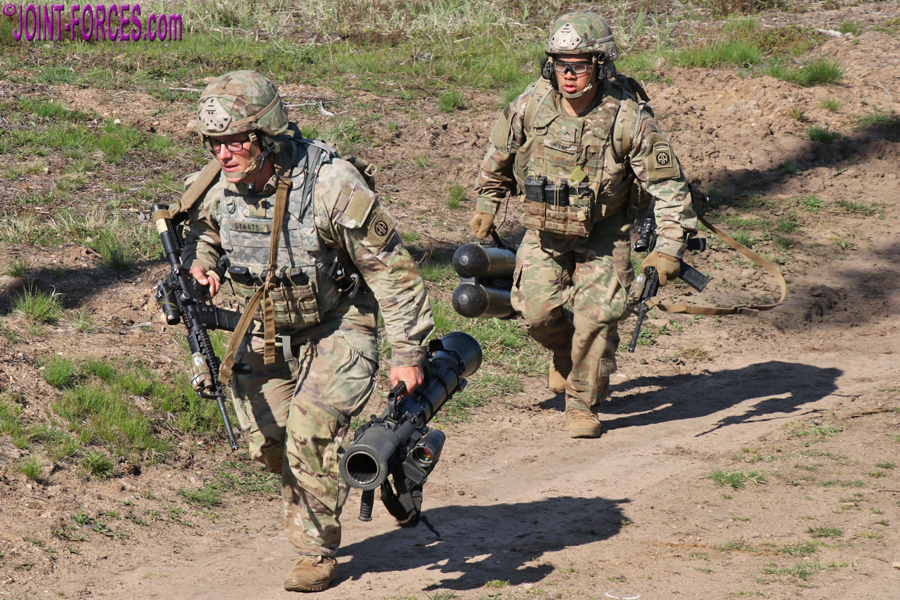 In this sixth part of Spring Storm In The Baltic Region our focus falls on the 508 PIR Heavy Weapons live fire on SWIFT RESPONSE in Estonia, reports Bob Morrison.

The 508th Parachute Infantry Regiment, 508 PIR, was first activated almost 79 years ago at Camp Blanding in north-east Florida on 20 October 1942 as part of the recently re-designated 82nd ‘All American’ Airborne Division. After crossing the Atlantic over New Year 1944, the regiment trained briefly in Northern Ireland and then moved to Nottinghamshire to prepare for the forthcoming invasion of Europe (Operation OVERLORD). In the early hours of 6th June 1944, 508 PIR parachuted into Normandy tasked with capturing Sainte-Mère-Église and although many were dropped in the wrong locations most gradually regrouped and fought on in Normandy for a full month, taking over 50% casualties.

After returning to England to reorganise, the regiment subsequently jumped in south-west of Nijmegen during Operation MARKET GARDEN in September 1944 and in the December they fought during the Battle of the Bulge, screening a US Army withdrawal and delaying the advance of the German armoured formation. During their WWII campaigns the regiment earned itself the motto ‘Fury From The Sky’ which it retains to this day; incidentally, during SWIFT RESPONSE 2021 in Estonia their PZ (pick-up zone) for the Air Assault phase was designated FURY. The regiment was deactivated in late 1946 after returning State-side, reactivated from 1951 to 1957, then reactivated once again in 1962. In April 1965 the then 508 Infantry Regiment deployed operationally to the Dominican Republic to assist with a NEO (Non-combatant Evacuation Operation) made necessary by the outbreak of civil war, then in 1968 it was operationally deployed to Vietnam in response to the Tet Offensive.

The regiment’s lineage becomes a little complicated during and after the Vietnam War, but by the 1983 invasion of Grenada under Operation URGENT FURY two of its battalions participated as part of the 82nd Airborne Division. Six years later the 1st Battalion, or 1-508 IR, participated in the invasion of Panama on Operation JUST CAUSE as part of the 193rd Infantry Brigade. Further reorganisation in 1996 saw the colours of 1-508 PIR being reactivated in Italy to form the nucleus of the reactivated 173rd Airborne Brigade, which in 2003 parachuted in Northern Iraq on Operation IRAQI FREEDOM. Two years later, still serving with the 173rd, 1-508 PIR deployed operationally to Afghanistan on Operation ENDURING FREEDOM, before in 2006 the battalion was reactivated once again under the 82nd Airborne. In 2014 1-508 PIR was reassigned to the 3rd Brigade Combat Team (3 BCT) of the 82nd Airborne Division and it was in this role that we joined one of their companies in Estonia in early May on the first wave of SWIFT RESPONSE 2021.

At the invitation of USAREUR-AF (US Army Europe and Africa) Public Affairs, we joined 1-508 PIR on the Estonian Defence Force Central Training Area, the Tapa Polygon, a couple of days after the air assault phase to follow their Heavy Weapons Squads as they conducted a live fire attack on enemy positions with artillery support from the airborne gunners of Charlie Battery, 1-319 AFAR. A 39-strong US Army infantry platoon consists of three rifle squads of nine troops apiece, a heavy weapons squad of nine, and a platoon headquarters consisting of a platoon leader, platoon sergeant and a radio telephone operator. The accompanying photos mostly show the heavy weapons squads from two of the 1-508 PIR platoons which parachuted onto Nurmsi Airfield in the early hours of 8th May after flying across the Atlantic from North Carolina.

According to US Army Training Publication ATP 3-21.8:-

On SWIFT RESPONSE 2021 in Estonia the two medium machine gun teams used the M240L (aka 240 Lima) 7.62x51mm variant of the Belgian FN MAG with 550mm barrel and collapsible stock. A close combat missile team used the M3E1 MAAWS (Multi-role Anti-armour Anti-personnel Weapon System) which is the US designation for the 84mm Carl-Gustaf recoilless rifle; dependent on mission, the FGM-148 Javelin can also be used. Rather than an anti-armour weapon, the fourth team in each of three squads I saw that afternoon used the M224 60mm Lightweight Mortar in hand-held mode.

Once the safety teams had ascertained that I was both familiar with range procedures and live weapons and had worked with the US military since before Gulf War One, and therefore was unlikely to do anything stupid or dangerous, they allowed me to move forward with two of the squads as they left cover and advanced to their firing positions. After engaging armour and personnel targets to their front, each squad then took its turn to reposition on the right flank, using dead ground while an artillery barrage kept the heads of the notional enemy down, before launching a second strike on the prepared positions from a little closer and then storming forward to mop up. [At this point, because I was still limping as a result of a knee tendon injury suffered just three weeks before, and as I had three more weeks of exercises ahead of me, I let each squad tab to their second firing positions while I returned to the start line to pick up the next squad ~ sometimes discretion really is the better part of valour].

Much as I would have liked to cover the Balkans phase of SWIFT RESPONSE 2021, which USAREUR-AF invited us to, pandemic travel restrictions in place at the time plus a lack of scheduled flights prevented this, so as the US and UK Airborne participants packed away their gear for their next tasking I stayed put in Estonia and prepared to meet Denmark’s Jutland Dragoons deployed on KEVADTORM (SPRING STORM) 2021. Watch this space…