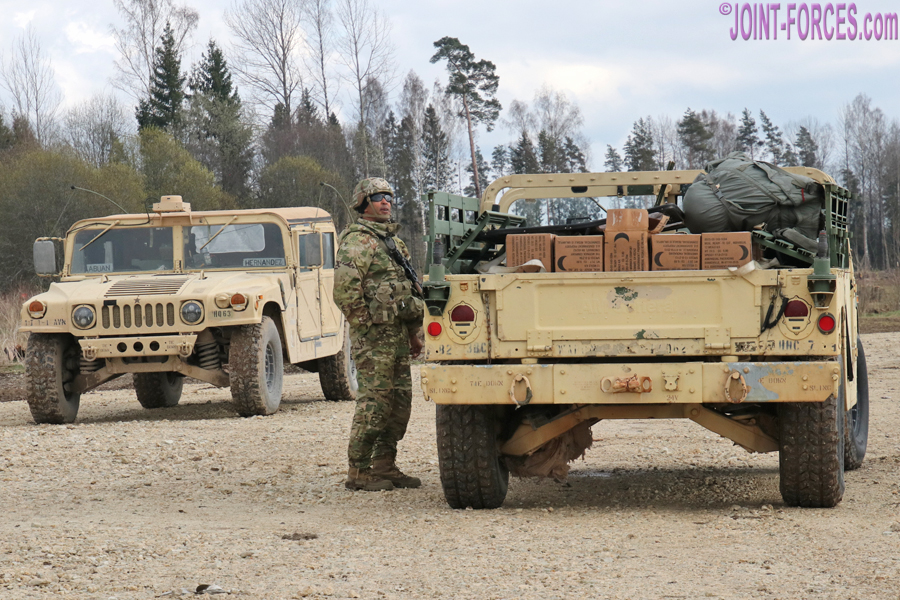 A brace of Hum-vees, one from 1st Infantry Division Combat Aviation Brigade and the other from 82nd Airborne Division 3rd Brigade Combat Team on the edge of Nurmsi Drop Zone in Estonia, 8th May 2021 [©BM]

Before looking at the follow-on heliborne air assault phase of SWIFT RESPONSE 2021 in Estonia I am focusing my attention on the drop zone vehicles, writes Bob Morrison.

The primary aim of SWIFT RESPONSE 2021 or SR21, a US-led multinational exercise held near simultaneously across several countries and linked into the DEFENDER-Europe 2021 deployment, was to demonstrate the US and NATO Alliance commitment and ability to rapidly and near simultaneously reinforce a number of European countries in potential times of crisis. The exercise was also used to as a TTP (Tactics, Techniques & Procedures) refresher for Airborne and Air Force personnel who might be involved in future JFE (Joint Forcible Entry) missions.

Although a roughly 600-strong force of American and British Paratroopers, what 25 years ago would have been the equivalent of a UK LPBG or Lead Parachute Battalion Group, flew over the Atlantic and dropped onto a grass airfield in Estonia, only a representative portion of the Heavy Drop of US Army equipment took place. As other SR71 JFE missions were scheduled for Bulgaria and Romania shortly afterwards it would have been a waste of expense and of logistics to parachute more than a representative batch of heavy equipment into the Baltic Region only to have to recover it State-side a few days later. However for realistic training a small number of vehicles and artillery pieces typically deployed with an Airborne battalion group were air-delivered in real time onto Nurmsi Airfield and other prepositioned vehicles were used for logistic support while the Paras were on and around the DZ.

The HMMWV or Hum-vee is still the primary light vehicle forward deployed by 82nd Airborne Division, though the M1297 A-GMV or AGMV and to a lesser extent the JLTV are gradually replacing it in most US Airborne units. A small number of Hum-vees were inserted by parachute during the night drop in the early hours of 8th May and some of these would later be flown forward to the Tapa Central Training Area underslung from helicopters during the air assault phase in the evening. The Hum-vee was also used as a gun tractor for the M119 105mm howitzer, which is the US version of the British L118 Light Gun.

The smaller Polaris MRZR-4 is also deployed, including by air-drop, by US Airborne units and one of these was beavering around Nurmsi earning its keep moving specialist personnel and their kit. Although these nippy little vehicles are often dropped in pairs on the one platform, only one was operating on the DZ when I arrived at first light, but as the lead units had already moved off into the forest before dawn to mop up any OpFor remnants there could well have been others.

Part of an M777 155mm light towed howitzer battery was also parachuted in on the heavy drop to form a supporting gun line on the DZ, but no gun tractors were dropped with them. A single M1083 FMTV 6×6 5-ton cargo truck, an earlier Stewart & Stevenson version rather than the later Oshkosh version of the FMTV or Family of Medium Tactical Vehicles, was used to reposition the guns and then to later tow them to the helicopter landing site for the air assault phase; being in excess of four tonnes, the M777 is a little too heavy for the Hum-vee to comfortably tow off-road.

The final US vehicle I spotted at Nurmsi was an M1120A4 LHS (Load Handling System) HEMTT (High Expanded Mobility Tactical Truck) with B-kit armoured cab, which was there to refuel the Black Hawk and Chinook helicopters during the follow-on air assault phase (which I plan to cover in Spring Storm In The Baltic Region ~ Part Five). This 8×8 Oshkosh logistic truck carried a 2,500 gallon tank rack, which is itself air-droppable but on this occasion was brought in by road.

As the SWIFT RESPONSE 21 heavy drop in Estonia took place in the middle of the night I was unable to photograph it. The heavy drop photos below were taken during SWIFT RESPONSE 2017, at Hohenfels in Germany, when the first pass on the second day of the exercise was successfully completed before low cloud closed in again and heavy rain caused the subsequent waves to abort on peacetime safety grounds.