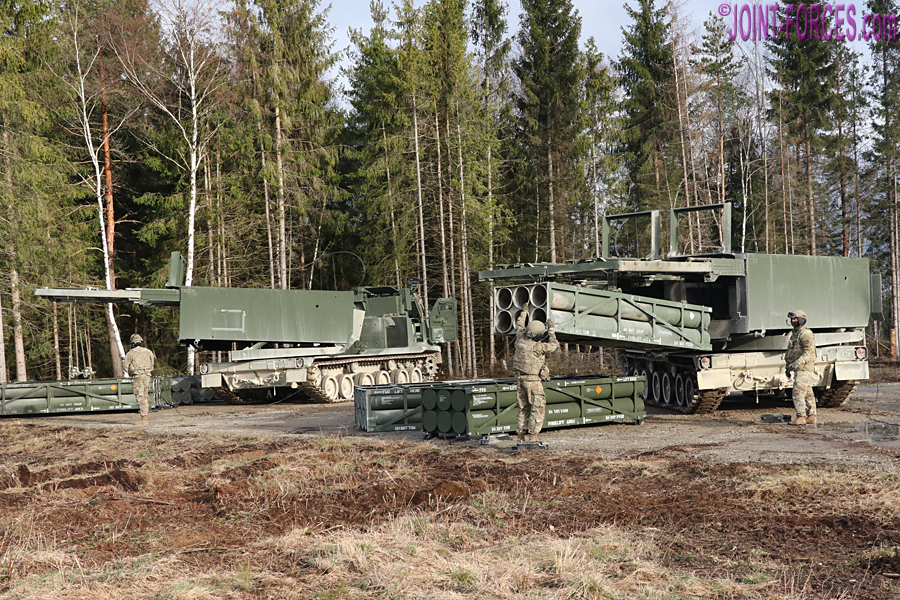 US Army MLRS crews from 1-77 FAR reloading in Estonia during the first live-fire exercise in the FIRES SHOCK series, May 2021 [©Bob Morrison]

In Part Two of Spring Storm In The Baltic Region our focus falls on the US 41st Field Artillery Brigade on the Estonian phase of FIRES SHOCK, reports Bob Morrison.

FIRES SHOCK 2021 was a series of USAREURAF (US Army Europe and Africa) field artillery manoeuvres to “exercise the rapid deployment of long-range precision fires and joint forcible entry fires across two continents, from the Baltics to the Black Sea and from the Arctic to North Africa”.

The programme, which ran from 2nd May through to 19th June, was linked into five separate binational or multinational exercises as well as the overarching US Army’s DEFENDER-Europe 21 deployment. The first linked exercise of the five was SWIFT RESPONSE 21 in Estonia, which ran from 1st to 7th May and immediately preceded the main KEVADTORM / SPRING STORM field training exercise phase. On the Estonian leg of SWIFT RESPONSE American and British paratroopers from the JEF (Joint Expeditionary Force) crossed the Atlantic from North Carolina and parachuted onto Nurmsi Airfield, around 80km from the Tapa Training Area, to conduct a Joint Forcible Entry in support of 1st [EST] Infantry Brigade, and the subordinate UK-led NATO eFP (enhanced Forward Presence) Battle Group, which was being attacked by Yellow Forces.

To suppress the conventional Yellow Force enemy and prevent them disrupting the JEF parachute insertion, an MLRS (Multiple Launch Rocket System) battery from the Bavarian-based B (Bravo) Battery, 1st Battalion, 77th Field Artillery Regiment of the US 41st Field Artillery Brigade joined Royal Artillery GMLRS gunners from the composite eFP BG Artillery Group on the Tapa Central Training Area. As one of the key aims of FIRES SHOCK was to conduct long-range artillery fires in close cooperation with other nations across the different theatres using a variety of networked and multi-domain communications platforms, in Estonia the B Battery launchers were controlled by the British artillery contingent (which we will look at later in this series) during the live-fire phase.

At wartime strength an American MLRS Battery would consist of six M270A1 tracked launchers each with two launch pods capable of firing six 3,950x227mm rockets apiece, but peacetime battery strength is usually just four launchers and this was the number deployed to Estonia. Britain’s Royal Artillery uses the M270B1 version of MLRS, with the intent of primarily firing guided missile munitions rather than unguided rockets if operationally deployed, and this weapon system is usually referred to as GMLRS; both launchers are identical and based on a Bradley tracked chassis with an armoured cab for the crew of three. The easiest way of quickly differentiating between US MLRS and British GMLRS, particularly when vehicles are coated with a patina of mud and dust, is the circular antenna behind the armoured cab of the former and the two straight BOWMAN antennae on the latter.

To ensure maximum safety during FIRES STRONG on the Estonian Defence Force’s Central Training Area near Tapa, the unoccupied heart of which measures only about 20×12 kilometres by my reckoning, the US MLRS battery used full calibre Reduced Range Practice Rockets (M28 RRPR) that are limited to 15km maximum range and have non-explosive warhead bays. The British GMLRS unit firing alongside Bravo Battery used their standard sub-calibre training rounds, which are non-guided projectiles limited with a shorter maximum range than the US practice rockets. However although both systems were only firing training rounds, the danger zone around the launchers when they are firing is so great that we were unable to get any closer to the nearest vehicle than around 325 metres during the fire mission.

The serial we watched commenced firing in the evening after three of the Bravo Battery crews had reloaded with fresh rocket pods (one live pod and one empty pod per vehicle) just in front of us. After a single check rocket had been fired and the fall of shot verified, the British GMLRS fired a full salvo of twelve sub-calibre training rockets in well under a minute and then the American MLRS battery commenced firing salvoes of practice rockets. Had this been a combat mission rather than a training exercise, each rocket or guided missile would have contained 518 or 404 munitions (bomblets) respectively allowing a battery to saturate a one kilometre grid square with what was nicknamed ‘steel rain’ after the system’s first operational deployment during Gulf War One in Kuwait in 1991. Maximum range for the M26 rocket is 45km and for the M30 guided missile, both of which are used by the US, is 70km plus an extended range rocket capable of reaching 150km is scheduled to enter production next year.

Under the FIRES SHOCK umbrella and following on from SWIFT RESPONSE in Estonia, 41st FAB deployed launchers for live-fire exercises in both Germany and Poland on DYNAMIC FRONT 21 (02-24 May) and then to Bulgaria for SABER GUARDIAN 21 (June 2) followed by Morocco for AFRICAN LION (09 June) as well as Norway for THUNDERBOLT (01–14 June). Although we were also invited to cover some these exercises, regrettably pandemic travel restrictions (plus Carl’s extended Reservist service) prevented us covering any of these.

For the next articles in this Spring Storm In The Baltic Region series I plan to look at the British and French eFP contingents undertaking joint training prior to the main KEVADTORM field training exercise and the linked Joint Forcible Entry exercise by American and British Paras on SWIFT RESPONSE, but I intend returning to cover the British GMLRS and the rest of the composite eFP BG Artillery Group deployed to Estonia in a later article.