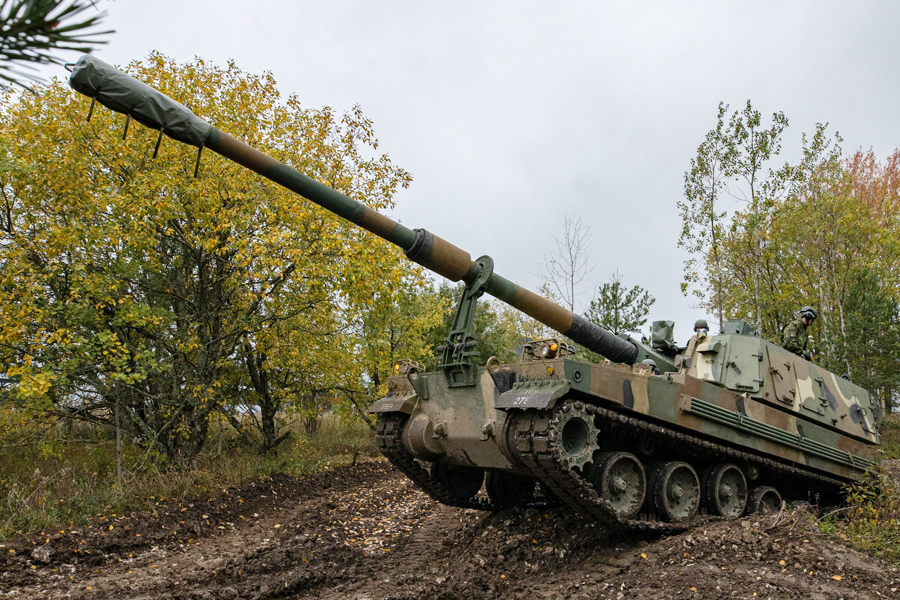 Before my departure to Estonia at the beginning of May to photograph a number of exercises and deployments in the most north-easterly of the NATO nations I was asked by my hosts if there was anything on the Estonian side I particularly wished to see; the new LMT R20 Rahe assault rifle, the new Hanwha K9 Kõu self-propelled howitzer and the new Supacat HMT JACKAL recce vehicle naturally topped my wish list.

Snapping the R20 Rahe in use was easy, as it was widely deployed on Exercise KEVADTORM 2021, but the JACKAL was impossible to photograph as the few in service have already been operationally deployed to Africa with Estonian Special Forces. That just left the elusive K9 Kõu, of which just the first pair are known to have been delivered, but on my penultimate day out on the ground the Estonian Ministry of Defence allowed me a chance to photograph one of the two even though it was not actually deployed on the national exercise as the Artillery Battalion crews are not yet quite fully trained on their new system and full integration is not quite complete. Apologies for the poor quality of my photos, but to say it was ‘persisting down’ that day is probably an understatement.

In December 2016 Finland, which was in negotiations with Korea’s Hanwha Defense over the procurement of a batch of K9 Self-Propelled Howitzers, invited Estonia to partner with them to benefit from the economies of scale and the following February the Estonian MoD accepted the invitation. Shortly afterwards Finland confirmed the decision to order 48 of the weapon systems and in June 2018 it was confirmed that Estonia was buying another 12 SPHs with delivery of the first examples expected in 2020.

Despite the challenges posed by the COVID-19 outbreak, Hanwha successfully delivered the first pair of K9s to the Estonian Defence Forces right on schedule in the autumn of 2020 and in early April this year instructors from the Estonian Artillery Battalion conducted the first live-fire training with the new systems – see First Test Shots Fired From Estonian K9 Kõu. The next major outing for the K9 Kõu is scheduled for early to mid-June, during the follow-up live-fire exercises after the field training phase of KEVADTORM 2021 concludes, but although I was invited to cover this it regrettably was not really feasible to stay out in the Baltic for another two weeks (with a probable mandatory 10-day quarantine period then taking me out of the loop once back in the UK and impacting future commitments at the end of the month).

In addition to Estonia and Finland, Norway has now also ordered 24 of the K9 Thunder SPH, known as VIDAR to the Viking Gunners, along with ten of the fully automated K10 Armoured Resupply Vehicle variants. Poland has also started putting British AS-90 turrets onto 120 Hanwha K9 Thunder tracked chassis as part of their AHS KRAB programme to modernise the artillery forces in the face of regional uncertainty. Australia has also picked the Hanwha K9 as its preferred solution for its Army Protected Mobile Fires programme (see Hanwha K9 155mm SPH Shortlisted By Australia) and it is widely tipped that the K9 will be one of the front runners if/when the British Army announces its AS-90 replacement requirement. India has licensed the Korean SPH as the K-9 VAJRA, Turkey is bulk producing the weapon system under licence for both its national forces and Muslim markets as the T-155 FIRTINA, and of course the K9 is now the primary 155mm SPH of the Republic of Korea Army (RoKA).

With a combat weight of around 48 tonnes, the K9 Thunder / K9 Kõu is remarkably compact measuring approximately 12,300 x 3,400 x 3,500mm high. It is powered by a 1000hp MTU Friedrichshafen 8-cylinder water-cooled diesel engine which gives a top road speed of 67km/hr or 42mph. Crewed by five, when emplaced it can fire its first round inside 30 seconds from receiving firing information and if moving it can fire after 60 seconds. The system is capable of firing a burst rate of three rounds in less than 15 seconds and has a maximum rate of fire of six to eight rounds per minute for three minutes; sustained rate of fire is about five rounds every two minutes for one hour. A total of 48 ready rounds is stowed onboard. Maximum range with standard 52 calibre barrel, dependent on precise type of NATO 155mm ammunition used, is 40 kilometres.