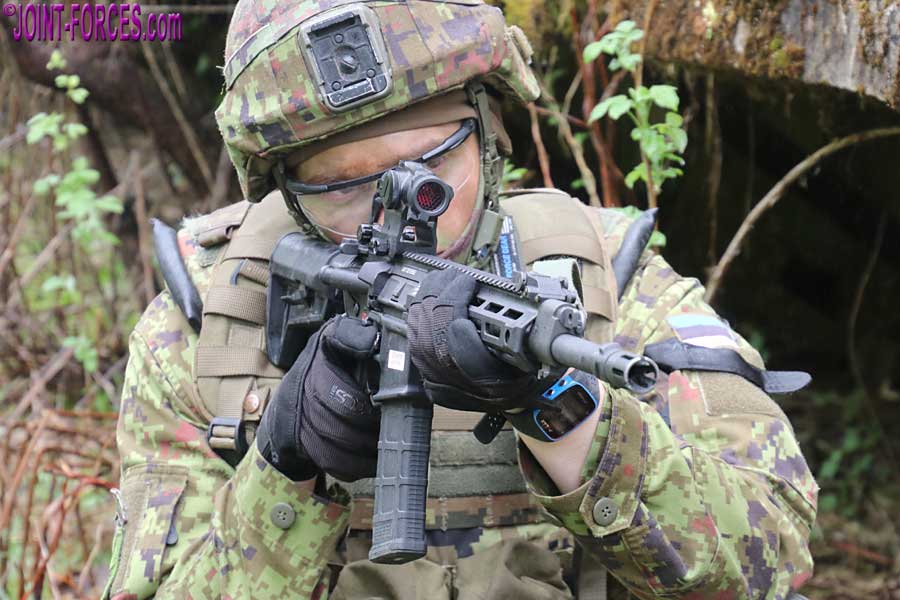 Yesterday, during the initial unit training phase of Exercise KEVADTORM (SPRING STORM) 21 on the Central Training Area near Tapa we were able to photograph the R20 RAHE (which translates as HAIL in English) being carried by conscripts tasked with providing security for a deployed headquarters.

The 5.56mm R20 is a version of the LMT Modular Ambidextrous Rifle System – Light, or MARS-L, produced specifically for Estonian military requirements and in due course it will replace the legacy stocks of 5.56mm IMI Galil and and 7.62mm G3 (Swedish Ak 4 version) assault rifles fielded primarily by 1st and 2nd Infantry Brigades respectively. First examples were fielded last summer, but COVID-19 travel restrictions prevented either Carl or myself visiting Estonia last year so yesterday was our first opportunity to document the new rifle; incidentally, the New Zealand Defence Force has also re-equipped with an LMT MARS-L version.

The company’s product sheet on the MARS-L states the firearm is milled from a single solid piece of aerospace aluminum [i.e. aluminium] forging and it utilises two locking bolts accessible from the side of the receiver to lock in the barrel extension. This patented technology engages the barrel extension for a full 360 degrees around the extension and makes the barrel removable within seconds with a return to zero of the same barrel. One receiver can utilise numerous barrels of varying length, material, and calibre. The upper receiver has 14.5″ of uninterrupted 1913 Picatinny rail on the 12 o’clock position and the remaining 7 sides provide M-LOK compatible attachment points. Monolithic rail platform barrels utilise a low profile gas block and straight gas tube. They possess proprietary coating and are cryogenically treated for long term durability. The MARS-L ambidextrous lower receiver features LMT ergonomic textured grip and SOPMOD stock, and the ambidextrous features include bolt catch, magazine catch, and safety selector.

Press Release, Eldridge, 16 May 2019: LMT Defense (formerly known as Lewis Machine & Tool) is pleased to announce the award of the firearms contract for Estonian Defence Forces.

After an extensive two year tender and testing process, the Estonian Defence Forces have selected LMT Defense. The original competition had 12 companies respond to the call for tenderers. This week LMT Defense was finally confirmed as the chosen winner. LMT Defense is honoured to be selected to supply complete small arms solutions to the Estonian Defence Forces, EDF. The rifle selected is the LMT MARS family of rifles, including the AR 15 and AR 10, in addition to 40mm Grenade Launchers.

The initial deliveries of rifles and accessories will commence in 2019 and is projected to be completed by 2021 with options for future modernisation over the next 20 years. “We are committed to making the best weapons in the world”, said Karl Lewis. “This long term partnership between LMT Defense and EDF reflects our commitment to support our NATO Partners and worldwide allies.”

To assist with providing the best AR 15 in the world, LMT Defense has partnered with Milrem LCM and Visible Assets. Milrem LCM is an Estonian Defense Lifecycle Management provider to help conduct in country logistical support. Milrem LCM has been a partner with EDF since 2014 and has developed extensive knowledge through support of EDF armoured combat vehicles. Visible Assets has created the latest technology of wireless shot counter and armoury electronics to support EDF logistical capabilities. RuBee technology uses magnetic fields that provide battlefield security but provide the armoury with automatic notifications of maintenance and security.

These weapons utilise the LMT Defense monolithic upper on the MARS rifle system. The MARS was developed in 2014 and was initially delivered under contract to New Zealand Defence Force. The MARS weapon platform is a completely ambidextrous rifle system including ambidextrous bolt catch, bolt release, safety selector, magazine release and charging handle.

Over the next week or so I hope to have the opportunity to photograph more Estonian troops out in the field during the main combat phase of KEVADTORM 21 which, although much reduced in size and scope from the 2017 and 2019 iterations which I had the chance to cover, should still be a very interesting exercise involving the NATO eFP (enhanced Forward Presence) Battle Group Estonia and a Danish contingent which deployed into theatre last week.