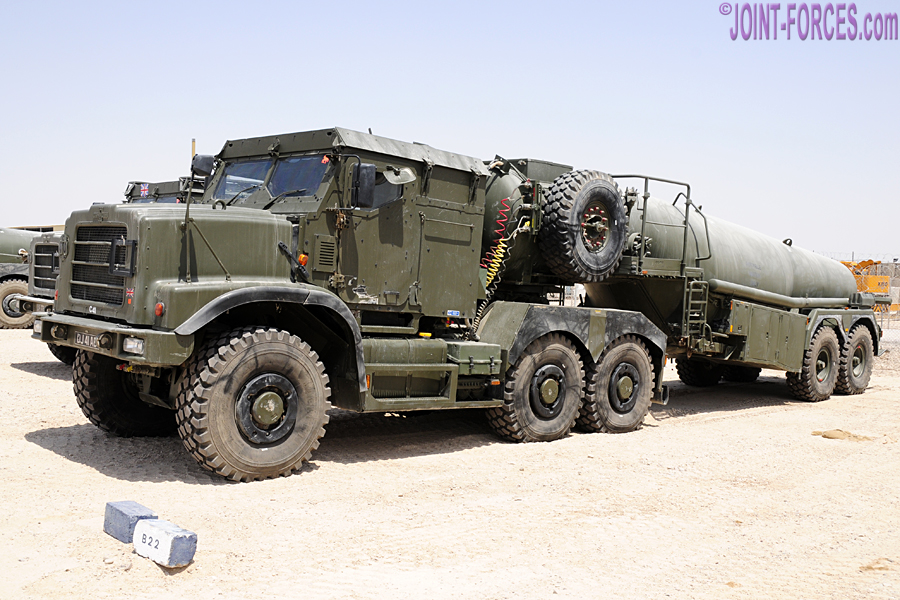 In this mini-series we look back at the now mostly over fifteen years old and well-travelled Oshkosh Tankers used by British Armed Forces, writes Carl Schulze.

In this final part of the trilogy, having already looked at the origins of the programme and at the tractor unit plus both fuel tanker trailers, we now turn our attention to the water tanker and light equipment trailers as well as the armour protected tractor cab option.

Only 57 of the CST(W) were procured. The water semi-trailer features a single compartment insulated tank that can hold up to 18,000 litres, as compared to either 20,000 or 15,000 litres for the fuel tankers. The tank features conical and cylindrical sections with domed ends, is made of hot-rolled AISI 316L stainless steel and its shell is 4.6mm thick. Two lateral and two longitudinal baffles are placed inside the tank in order to prevent the trailer from rocking. On the top of the trailer, to the front, is situated a 500mm diameter hinged fill cover.

The pumping module on this variant has been placed under the tank, rather than behind. It contains a self-priming stainless steel centrifugal water pump, built by Magyar SA., with a pumping capacity of 999.8 litres per minute. A contents gauge with an external reading display allows the operator to monitor the filling level of the tank. Overall, the CST(W) semi-trailer has a length of 10,371mm and its gross weight is 26,500 kg.

This semi-trailer is used to transport light armoured vehicles and engineer plant machinery and is in service with units of the Royal Logistic Corps, the Royal Electrical and Mechanical Engineers and the Royal Engineers. Usually the trailer is towed by the Seddon Atkinson Strato 6×4 ‘Light A’ tractor, however, the fact that the Wheeled Tanker Tractor Truck offers greater mobility and can be fitted with appliqué armour led to the decision to using the ILET with it.

The reason for the procurement of the ILET was that the previously employed Trailmaster Light Equipment Trailer, or LET, low-loader semi-trailers that were limited to a payload of 30 tonnes exhibited structural cracking, so there was an imminent need to replace them. In June 2004 the Dutch company Broshuis B.V. was selected to provide the replacement for the LET, which was given the designation Interim Light Equipment Trailer or ILET in short. Between September and October 2004 successful trials were conducted with two low loader semi-trailers provided by Broshuis B.V.. These semi-trailers proved to be more than suitable and also offered an increased payload of a maximum of 44 tonnes.

Initially a batch of 60 semi-trailers was ordered, the first being issued to 19 Tank Transporter Regiment in December 2004. An order for an additional 39 ILET was placed with Broshuis B.V. on the 16th of September 2005 and all trailers had been delivered by June 2006. The ILET is 11,965mm long, features an electronic brake system, is fitted with outrigger boards and its quick release couplings allow detachment of the rear ramps.

The fact that the insurgents in Iraq and the Taliban in Afghanistan regularly attacked supply convoys made it an urgent requirement to fit the soft skinned Wheeled Tanker Tractor Trucks with armour protection. This armour would need to protect the vehicle crew from the effects caused by attacks with IEDs, small arms fire, mortar rounds and rockets. During production all tractor trucks of the Wheeled Tanker fleet had already been prepared by Oshkosh Truck Corporation to have the potential for later fitting of add-on armour kits. This made the further proceedings much easier and in a quite short period of time an appliqué kit was developed and manufactured by Plasan Sasa of Israel in a collaborative venture with Permali Gloucester Limited in the UK.

This add-on armour is known as the Cab Armour Kit. It looks quite similar to the ECP-58 Armor Protection Kit add-on armour which was designed and manufactured by Plasan Sasa and the Oshkosh Truck Corporation for the MTVR trucks of the United States Marine Corps. The Cab Armour Kit provides 360° all-around protection for the crew. In order to further improve the protection of the vehicles they were also fitted with a counter-IED ECM system that jams radio remote controls.

At the Defence Vehicle Dynamics 2008 exhibition held at Millbrook Proving Ground, the General Support Vehicles IPT (Integrated Project Team) of DE&S (the Defence Equipment and Support establishment of the UK Ministry of Defence, displayed a Wheeled Tanker Tractor Truck fitted with bar armour in addition to the Cab Armour Kit. This bar armour further enhanced the survivability of the vehicle and added protection against RPG warheads.

Conclusion: The Wheeled Tanker fleet significantly expanded the British Armed Forces’ on- and off-road supply capabilities for fuel and water. During operations the vehicles proved that they can go literally everywhere. At the same time they proved reliable and had a high in-service rate. With the timely supply of fuel and water being crucial for the success of military operations, the Wheeled Tankers provide their share to allow the British Armed Forces to conduct successful operations anywhere in the world.